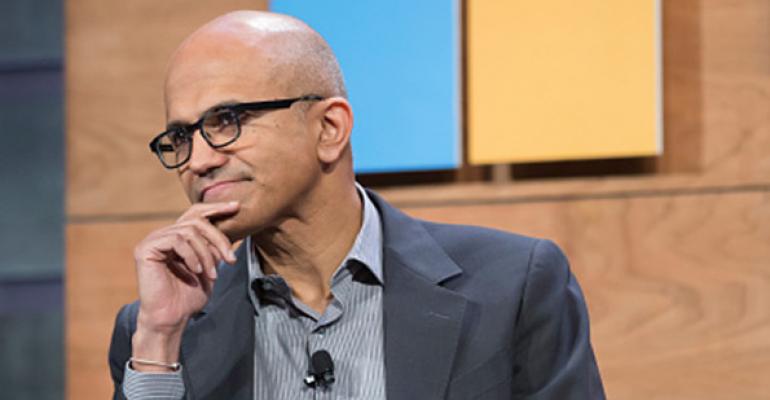 Microsoft CEO Says Company on ‘Right Side’ of Antitrust Battle

Satya Nadella said the company “is on the right side of history” in the antitrust debates about whether big technology companies abuse user privacy and squash competition.

(Bloomberg) -- Microsoft Corp. Chief Executive Officer Satya Nadella said the company “is on the right side of history” in the antitrust debates about whether big technology companies abuse user privacy and squash competition.

While Congress and U.S. regulators have clashed with Facebook Inc., Alphabet Inc., Amazon.com Inc. and Apple Inc. over the companies’ business practices, Microsoft hasn’t received the same kind of scrutiny more than 20 years after it was sued by the U.S. Justice Department on antitrust issues.

The software company “makes sure” user privacy and internet safety are among its highest priorities for products “and then when it comes to competition, I mean you should go talk to the people who are investing a lot of capital and a lot of M&A competing with Microsoft and we welcome that,” Nadella said Wednesday in an interview with Bloomberg Television.

During the interview, the Microsoft CEO also spoke about cybersecurity threats, the future of remote work and the company’s rivalry with Alphabet’s Google.

Nadella said he is concerned about the wave of hacks in the past few months, which have included ransomware attacks that stopped business at a major pipeline company and food producer in the U.S.

“We have another real pandemic, which is a cyber” pandemic, he said. “The level of attacks for sure have increased, but the need for our response to be top notch has also increased. We just have to get better as an industry.”

Nadella also discussed tensions with Google, following the end of a five-year cease-fire between the two companies, which mutually agreed not to fuel legal lobbying efforts against one another. He said he “has a lot of respect” for Google and its leadership.

“We’re fighting the good fight to sort of compete against colossal lead in that space,” he said of digital advertising sales, which is led by Google and Facebook.

Nadella weighed in on Microsoft’s work-from-home policy, emphasizing the importance of flexibility and accommodating “changed expectations” in the wake of the coronavirus pandemic. He spoke with Bloomberg Television after appearing at Microsoft’s Inspire conference for partners, where the company among its announcements unveiled a cloud-based version of Windows aimed at remote workers.

“We’ll really think about long-term policies based on, quite frankly, having all of that data behind us because otherwise I think we’re trying to come up and being too overly dogmatic,” he said.