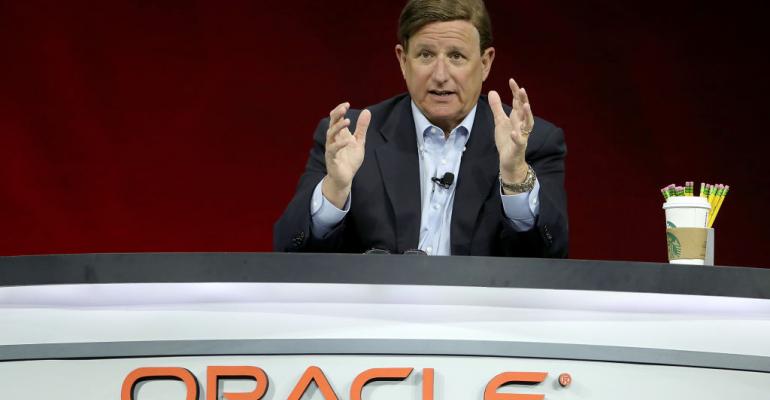 Hurd was a key driver in Oracle’s turn from an old model of licensing software toward the use of cloud computing, a burgeoning business dominated by rivals Amazon.com Inc. and Microsoft Corp.

(Bloomberg) -- Mark Hurd, who was chief executive officer of three major technology companies including Oracle Corp., has died. He was 62.

“It is with a profound sense of sadness and loss that I tell everyone here at Oracle that Mark Hurd passed away early this morning,” Ellison wrote. “Mark was my close and irreplaceable friend, and trusted colleague. Oracle has lost a brilliant and beloved leader who personally touched the lives of so many of us during his decade at Oracle.”

Hurd was co-CEO at Oracle with Safra Catz. He focused on sales, marketing and press and investor relations, while she ran finances and legal matters. Oracle announced Sept. 11 that Hurd had begun a leave of absence for unspecified heath-related reasons and that Catz and Ellison would assume his responsibilities during his leave. The company couldn’t immediately be reached for comment Friday.

Hurd began his career in 1980 as a salesman for National Cash Register Corp. (now NCR), before rising in the ranks to the CEO post. In 2005, he was hired away as CEO by Hewlett-Packard Co., then the world’s biggest personal-computer maker. Hurd joined Oracle as a co-president in 2010, after resigning from HP when it determined he violated company standards by filing inaccurate expense reports to conceal a personal relationship with a contractor.

During his Oracle tenure, Hurd produced solid revenue and profits as the Redwood City, California-based company’s stock price hit a historic high in 2019. He was also a key driver in Oracle’s turn from an old model of licensing software toward the use of cloud computing, a burgeoning business dominated by rivals Amazon.com Inc. and Microsoft Corp.

When he hired Hurd, Ellison said, “There is no executive in the IT world with more relevant experience than Mark.” Ellison described Hurd’s dismissal by HP as the “worst personnel decision since the idiots on the Apple board fired Steve Jobs.”

Hurd reshaped Oracle’s salesforce. Beginning in 2013, he implemented a “specialist” model that made each member an expert in a single product category. In that year alone, he hired more than 4,000 people to implement his idea.

He also created the “Class of” program that was designed to inject a startup feel into Oracle. College graduates were hired for a dedicated program that prepared them to become Oracle’s future sales leaders.

In 2014, Hurd and Catz were named co-CEOs, while Ellison continued to serve as chairman of the board, orchestrate management changes and develop products as chief technology officer.

Hurd was regarded as the most media-friendly of the trio, frequently serving as the public face of the company to outline its goals. At the time Hurd and Catz were named CEOs, Oracle’s central business was selling software designed to run on gear owned by the customer and charging a license fee. Hurd was among those inside Oracle who saw the company’s future in cloud computing -- which would let customers rent software and run their data on servers owned by vendors such as Oracle. He predicted in 2015 that by 2025 all enterprise data would be stored in the cloud and that 100% of software development and testing would run through it.

Hurd led the charge to make Oracle one of the dominant cloud players, investing heavily in research and development and acquisitions, such as the $9.3 billion purchase of NetSuite Inc., sometimes called the first cloud company, in 2016. Oracle also bought Eloqua Inc., a marketing software company, and Taleo Corp., which makes talent-management.

He secured significant deals with AT&T Inc., Bank of America Corp., and Qantas Airlines to transfer their existing databases to the cloud through Oracle. By late 2019, Oracle served more than 420,000 customers in 195 countries and territories, he said.

Hurd had gone on a similar acquisition binge at HP, managing about $24 billion in deals, including buying Electronic Data Systems (EDS), as part of a larger plan to diversify the computer maker.

He was also a drastic cost cutter who was responsible for firing thousands of workers when he first took over as HP’s CEO and laying off thousands more after the $13.9 billion purchase in 2008 of a struggling EDS, a move many investors disliked.

Still, under Hurd’s tenure, HP increased profits for 22 straight quarters, while its revenue rose about 60% and its stock price doubled, according to data compiled by Bloomberg. He also helped HP surpass International Business Machines Corp. as the largest computer maker by sales.

In 2007, Hurd was named one of Fortune magazine’s 25 most powerful business leaders. In 2008, the San Francisco Chronicle named Hurd CEO of the Year.

After his ouster, HP discontinued making smartphones and its tablet computer. Eventually it split into two companies, one focused on personal computers and printers and the other on software and services.

Mark Vincent Hurd was born on Jan. 1, 1957, in New York and lived on the affluent Upper East Side of Manhattan. His Yale-educated father was a financier who moved the family to Miami while Hurd was in high school. His mother was a debutante.

Hurd received a tennis scholarship to Baylor University in Waco, Texas, where he earned a bachelor’s degree in business administration in 1979.

He was hired in 1980 as a junior sales person by National Cash Register in San Antonio. He eventually became president, chief operating officer and CEO of the maker of automatic teller machines and cash registers.

Based on his NCR record, HP hired him in 2005 as its CEO and added the chairman title the following year.

“Mark just blew everybody else out of the water,” said Tom Perkins, a former HP executive who interviewed Hurd for the CEO job.

Hurd served on a number of corporate boards and was a Baylor University trustee since 2014.

He was married to the former Paula Kalupa in 1990. They had two daughters, Kathryn and Kelly.