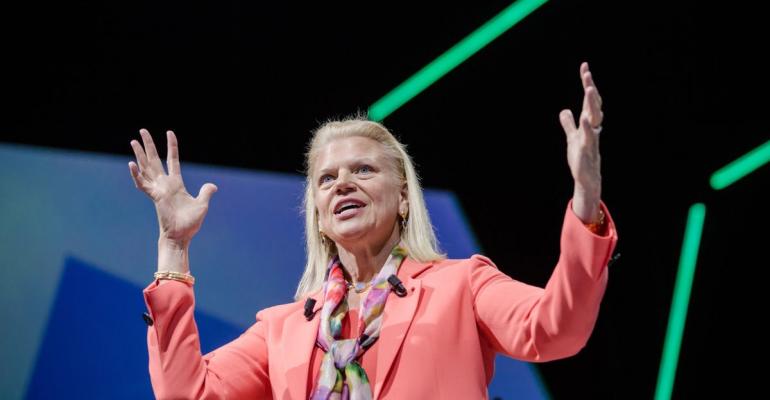 Red Hat will improve IBM profit margins, and gets the company further into an emerging part of the business known as hybrid cloud. But some analysts say the deal won’t make IBM a dominant player in the public cloud.

(Bloomberg) -- International Business Machines Corp. Chief Executive Officer Ginni Rometty has staked her legacy on a $33 billion acquisition designed to save the century-old company from irrelevancy in a business led by younger tech giants like Amazon.com Inc.

In the second-largest deal in industry history, IBM is buying Red Hat Inc., a seller of software and services based on the open-source Linux operating system. The move is an admission that IBM’s current cloud strategy isn’t working -- and some analysts doubt Red Hat is the solution.

“This is not a game changer in the way that Ginni has claimed,” said Lydia Leong, an analyst at research firm Gartner Inc.

Shares of IBM fell 4.1 percent on Monday to $119.64, the lowest closing price since early 2016. Red Hat stock ended the day more than 10 percent below the $190 a share acquisition price, signaling some investors are skeptical the deal will get done. Financed largely by debt, the deal already drew a downgrade of IBM’s credit rating from S&P Global Ratings.

Red Hat will improve IBM profit margins, and gets the company further into an emerging part of the business known as hybrid cloud. But the deal won’t make IBM a dominant player in the public cloud -- the lucrative business of running software over the internet in remote data centers rather than on a company’s own computers, Leong said.

The public cloud market will grow to $83.5 billion by 2021, from $30 billion last year, according to Gartner. IBM mostly missed that revolution under Rometty’s predecessor, Sam Palmisano, who dismissed Amazon’s strategy of spending heavily on massive data centers to handle other companies’ computing tasks. Rometty tried to break into the market with the $2 billion acquisition of SoftLayer Technologies Inc. in 2013, but by then Amazon, Microsoft Corp. and even Google already had a head start.

“One of the most important takeaways from the Red Hat acquisition is the admission that IBM’s public cloud efforts are effectively dead,” tech analyst Ben Thompson wrote in his Stratechery blog.

Having large data centers to spread the cost of handling vast quantities of data and computing workloads is one of the most important elements of cloud computing, and Red Hat doesn’t provide that, according to Timothy Horan, an analyst with Oppenheimer & Co. "They still have a long way to go before they can compete with Microsoft and Amazon in cloud,” he wrote in a note to investors.

Instead, Red Hat gives Rometty a shot at the next wave: hybrid cloud. This is where companies run software programs and store data on a combination of their own servers and public cloud services. IBM and Red Hat aim to oversee this for large organizations that don’t want to simply outsource work to Amazon, Microsoft or Google. Red Hat already operates successfully in this space.

Until now, Rometty’s tenure had been defined by falling revenue and massive cost cuts. Now the CEO has a chance to re-focus the company and its investors on the new challenge of hybrid cloud.

“This does open up an opportunity for a combined IBM/Red Hat to enter the market with a new service," Oppenheimer’s Horan said.

Still, Amazon, Microsoft and Google all provide this type of service too.

"The problem for IBM is that they are not building solutions for clueless IT departments bewildered by a dizzying array of open technologies," Thompson wrote. "Instead they are building on top of three cloud providers, one of which (Microsoft) is specializing in precisely the sort of hybrid solutions that IBM is targeting."

Microsoft already has the huge data centers to make money from this, while IBM will have to "pay rent" to the public cloud providers, he added.

Rometty won the CEO job in 2012 largely because of her success integrating another major acquisition. More than 15 years ago, she ran IBM’s consulting business when it swallowed PricewaterhouseCoopers’ management consulting arm for $3.5 billion. In a call with analysts on Monday, Rometty reminded them of her past experience.