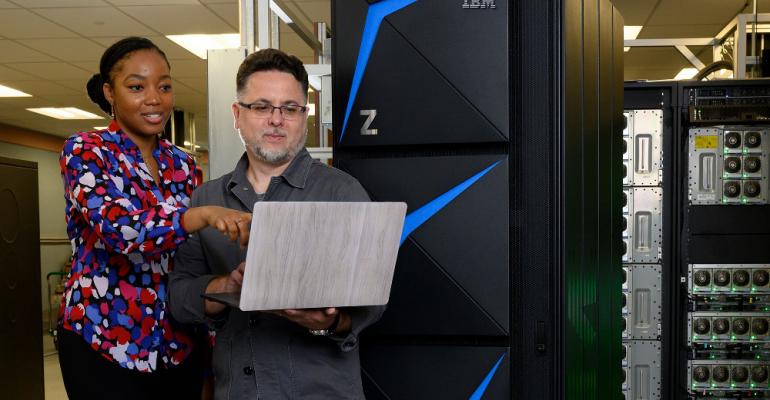 It comes with Red Hat's Kubernetes platform OpenShift, encryption and privacy controls for all data that starts on the mainframe, and packs plenty of computing muscle.

Since IBM announced the agreement to purchase Red Hat last fall it's been clear about its intentions to transform for hybrid cloud. Today the company took another step in that direction, unveiling z15, its next generation mainframe designed to anchor hybrid and multicloud infrastructures.

Alongside the new z series, IBM will also be releasing LinuxOne version 3, the next in its Linux-based mainframe family -- also designed for cloud-native workloads.

Keeping to the script it started last October, the company said the offerings were designed to meet the needs of enterprise customers in early stages of cloud adoption.

"When you look at the established companies around the world, all the heavy lifting is coming when they start looking at how best to take advantage of cloud mission critical kind of workloads," Mike Desens, VP of z Systems and LinuxONE at IBM, told Data Center Knowledge. "For us and z, that's about helping our clients by transforming their on-premise IT infrastructure into a private cloud, because many times they want to keep that data inside the firewall and yet still present it so that their development teams can consume [it] as a cloud consumption model like they want, whether it's on-prem or off-prem."

From a hardware standpoint, the four-years-in-the-making z15 brings a lot of power to the table. According to IBM, it can process up to 1 trillion web transactions a day and scale to 2.4 million containers in a single system, which equates to 2.3x more containers per core on a z15 logical partition than on a bare-metal x86 platform running the same workload.

It also brings extremely low latency into play, delivering up to 30x lower latency and 28x less CPU use by compressing data before encryption at the hardware level instead of using software compression.

With a feature called Instant Recovery, which utilizes normally dormant extra cores built into the system -- along with a bit of short-term overclocking -- the z15 can reduce the duration of planned or unplanned downtime. The extra cores can also be used to quickly process transactions that were delayed by an outage. It has 12 percent more cores and 25 percent more memory than its z14 predecessor.

A new form factor has been introduced as well, which might make the z15 easier and cheaper to deploy in modern data centers -- especially in colocation facilities.

"This system is our first one where we're shifting to 19-inch racks, which is more the industry standard," Desens said. "Traditionally we used to deliver our platforms with two 24-inch racks. Now you can get it in a 19-inch rack, and we can cluster one, two, three, or four of them together, depending on the configuration."

He said that the 19-inch racks should result in about 50 percent space savings and 40 percent better energy efficiency than x86 environments.

On the software side, the cloud-native container muscle will be supplied by the Red Hat's Kubernetes platform OpenShift and IBM's Cloud Paks, the containerized software introduced in August that's specialized by workload and optimized to run on OpenShift. IBM says with this combination DevOps teams will be able to deploy z/OS applications with no special z/OS skills required.

Encryption, Privacy Controls for 'Any Data That 'Starts on z'

Much of what's new in the new z system centers on addressing security and privacy issues, starting with what Big Blue is calling Encryption Everywhere. z14 already features encryption capabilities with Pervasive Encryption, which has helped enterprises stay in compliance with GDPR and other regulations, but that was confined to data on the mainframe. As the name implies, Encryption Everywhere will allow users to encrypt data even when it leaves the mainframe for processing or storage in the cloud.

"The bigger challenge they have in their enterprises is when the data leaves z and moves off into data lakes, data warehouses, or other areas where they're trying to extract insights," he said. "That's their bigger problem."

Z15 also brings granular privacy controls to the table with Data Privacy Passports, a consolidated data privacy solution that not only protects data on-premises at the infrastructure level, but introduces Trusted Data Objects, which allows an organization to establish and enforce enterprise-wide data privacy policies where user access to data is based on their need to know.

Desens explained that this is done by establishing personas, and offered as an example the personas "data scientist" and "regulator."

"Each one of those personas can be set up to be able to view only the fields they need," he said. "If a data scientist is trying to build new analytics for a marketing campaign, they don't have to see social security numbers. A regulator doesn't need to see any of those personal pieces of information.

"You can set up a policy as the data leaves the platform, and then, most importantly, because you're the central trust authority running on z, you can revoke that access anytime you want. It really takes the value proposition of pervasive encryption and extends it across the enterprise and across the hybrid cloud all the way out to the public cloud for any data that starts on z."

In addition, Data Privacy Passports provides necessary key management for Trusted Data Objects, simplifying the management of data as it moves between systems. Data can also be tracked from point of origin to point of consumption for auditing and compliance purposes.

General availability of the z15 mainframe is scheduled for September 23.