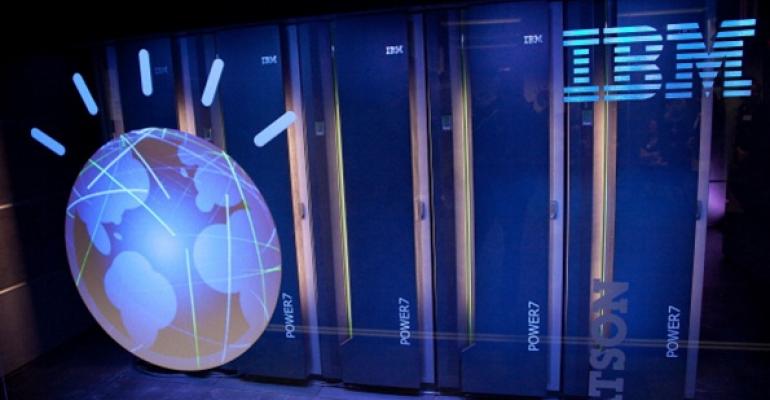 IBM Falls Most Since October After Cloud Growth Disappoints

IBM reported a decline in revenue from the cloud-computing, artificial intelligence and cognitive software unit that the company is hanging its future on.

(Bloomberg) -- International Business Machines Corp. fell the most in six months after reporting a decline in revenue from the cloud-computing, artificial intelligence and cognitive software unit that the company is hanging its future on.

IBM reported a 2 percent drop, to $5.0 billion, in sales from cloud and cognitive software, in the three months ended March 31. Cloud revenue alone grew 10 percent over the last 12 months, but that was a slower pace than the previous quarter. Revenue across all of IBM’s business units either fell or was little changed, according to a company statement Tuesday. The shares fell as much as 6 percent to $136.26 Wednesday morning. It was their biggest intraday decline since October.

Chief Financial Officer Jim Kavanaugh pegged the decline in cloud growth to a depreciation in the U.S. dollar. Excluding the currency headwind, cloud revenue grew 12 percent in the quarter, to $4.5 billion, double the pace from the previous period, Kavanaugh said in an interview.

IBM spent $33 billion last October to buy Red Hat, a move aimed at helping catapult the company into the ranks of the top cloud software providers. It was the biggest deal in IBM’s 108-year history and the world’s second-largest technology takeover ever. The transaction is expected to close later this year, but investors were looking for signs that it’s already beginning to pay off and help revive IBM’s trajectory.

“The stock market cares about the core business and what Red Hat is going to do to change the story,” Stifel analyst David Grossman said in an interview.

IBM has lagged the overall technology sector for years, with its 1 percent revenue growth in 2018 breaking a six-year run of declining sales. Analysts expect the slight reprieve to be short-lived, with annual revenue estimated to decline to $77.8 billion by the end of the year – the lowest since the late 1990s.

Total revenue for the first quarter was $18.2 billion, down 4.7 percent from the same period a year earlier and missing the average analyst forecast of $18.4 billion. Adjusted earnings per share were $2.25 for the period. Analysts projected $2.22.

Chief Executive Officer Ginni Rometty is throwing resources into the hybrid cloud, which allows companies to spread their data between private and public cloud providers, like Amazon.com Inc.’s AWS and Microsoft Corp.’s Azure. It’s a competitive market but Rometty is determined. “Hybrid cloud is a trillion dollar market and we will be number one in it,” Rometty said at IBM’s Think conference in February. She paid a significant premium for Red Hat because of its dominance in hybrid cloud architecture.

Edward Jones technology analyst Josh Olson said he still had reservations about IBM’s future growth prospects even with Red Hat under its wing. “IBM’s acquisition of Red Hat Software, while compelling strategically, carries significant integration risk and a high cost that may be difficult to justify,” Olson wrote in a recent note. IBM will need to see “significant revenue and cost benefits" to rationalize the rich price Rometty paid, he wrote in a note before the earnings were released.

Last quarter, IBM reported its first earnings since announcing the Red Hat deal and its shares surged the most in a decade, as the company gave a positive forecast for 2019 and fourth-quarter results beat analysts’ estimates. For the full fiscal year, IBM sees adjusted earnings per share of at least $13.90, it said in the statement.

This quarter IBM restructured its business and reported a new segment called cloud and cognitive software in preparation for the Red Hat acquisition closing. This segment includes cloud and data platforms, cognitive applications and its artificial intelligence unit, Watson.

The company’s consulting services -- a combination of its Global Business Services and Global Technology Services units – pulled in a combined $11 billion, representing about 60 percent of IBM’s overall revenue.

Alkira Builds a SaaS to Replace Your Cloud Backbone
Dec 02, 2020