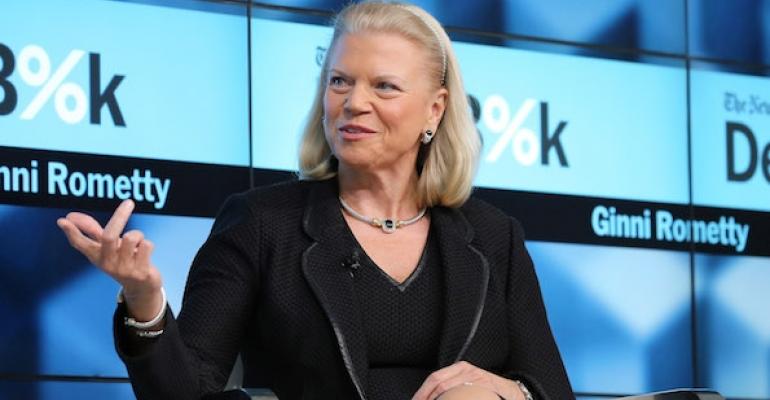 Chief Executive Officer Ginni Rometty is betting on the hybrid cloud, which lets IBM offer services on corporate customers’ cloud-based servers as well as on third-party clouds operated by the likes of Amazon and Microsoft.

(Bloomberg) -- In IBM’s vision of cloud computing, Amazon.com Inc. and Microsoft Corp. will be allies rather than rivals.

Chief Executive Officer Ginni Rometty is betting on the hybrid cloud, which lets IBM offer services on corporate customers’ cloud-based servers as well as on third-party clouds operated by the likes of Amazon and Microsoft. International Business Machines Corp. has traditionally viewed these cloud giants as direct competitors, but it now aims to partner with them by supporting clients as they shift sensitive databases on to the cloud, regardless of which provider they use.

Armonk, New York-based IBM has gone through many transformations in its 108-year history: shifting from punched card tabulating equipment to mainframe computers and now to the cloud.

“This company has had to be reinvented many times,” Rometty said in an interview on Bloomberg Television’s CEO Spotlight show. “It’s something many other companies have yet to face. It is one thing to put out new products, but it is something else when the competitive landscape attacks your core business models and you have to develop a new one.”

After struggling to keep up in the cloud market for more than a decade, IBM has switched to a hybrid cloud strategy, cementing its future with last year’s $34 billion acquisition of Red Hat, the Raleigh, North Carolina-based open source software provider.

In the interview with BTV, Rometty said Red Hat would continue to operate as a separate and distinct business unit within IBM. “They must remain committed and neutral. They have to be on all our competitor’s platforms,” she said. “You have competition and cooperation -- and in this case Red Hat is a platform that goes across all of them.”