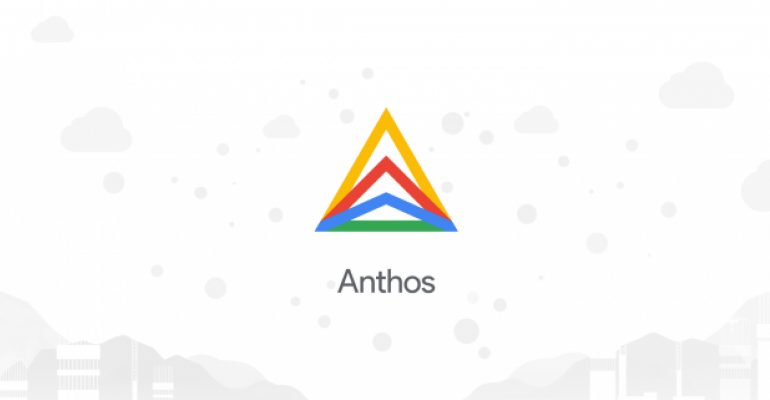 This second in a series of articles on making hybrid cloud a reality looks at Google Anthos – how it works, the deployment options, how it compares with AWS Outposts and who should consider it.

With its scale, flexibility and ease of use, the public cloud has always been an appealing option. But issues with bandwidth, privacy and (especially) cost, have made hybrid cloud the preferred architecture for most companies. This combination of on-premises infrastructure and connectivity to the public cloud has promised to deliver many of the original benefits of the public cloud while adding container support for technologies like cloud-native development and CI/CD.

In this blog series, we're looking at these new hybrid cloud options – AWS Outposts, Google Anthos and Microsoft Azure Stack, plus other solutions as they become available. In the previous blog post, we looked at AWS Outposts. Here, we delve into the Google Anthos platform.

An Introduction to Google Anthos

Google Anthos is an on-premises platform for running Kubernetes (K8S)-based applications on Google’s Kubernetes Engine (GKE) that connects to the Google Cloud Platform (GCP) in Google’s public cloud. Instead of providing the entire hardware and software stack as a service, Anthos leverages infrastructure partners to deliver its hybrid cloud experience.

Anthos runs on VMware, requiring four VMs in the initial configuration for administration, plus one to three VMs for each user cluster (to run workloads). Each VM must have 4 vCPUs, 8GB of memory and 40GB of storage space. Anthos requires layer 4 load balancers as well. The connectivity options are Cloud VPN or a dedicated/partner interconnect.

Setting up Anthos in the data center requires an Anthos subscription (on-premises license) plus an active Google Cloud Project, which is essentially a GCP account that gives you access to APIs and sets up billing. Although the Anthos on-premises price is not listed on the current pricing page, at introduction in April 2019, prices were $100 per vCPU per month and sold in blocks of 100 vCPUs. Subscription prices for GCP are also not listed, but an on-demand price of $30 per vCPU per month is scheduled to take effect in July. This puts a 100 vCPU deployment at $13,000 a month, plus support.

Google Anthos can also be run in third-party clouds like AWS or Azure. While this does provide a little more flexibility by giving you a choice of public clouds, Google is still managing it.

Microservices are part of the appeal of container-based software development. In a microservices-based architecture, the communication between services is key. A service mesh is a dedicated infrastructure layer built into the application that manages this communication, instead of coding this into each service. This involves proxies running alongside each service as "sidecars," providing metrics on operations, diagnosing problems and enhancing network security and reliability. Anthos Service Mesh includes a distribution of Istio, an open-source service mesh platform that's available as an add-in.

Anthos runs in VMware, which means you can also run legacy VM-based workloads on the same cluster as your Anthos Kubernetes workloads. This makes the Google Anthos platform more flexible for companies to adopt containers at their own pace, while still running applications in VMs. But, to be clear, this isn't the only turnkey solution for running containers and VMs in a hybrid cloud environment. VMware's vSphere 7, Nutanix's Karbon and Cisco's HyperFlex Application Platform also support Kubernetes and VMs in the same platform; Nutanix on its AHV hypervisor and Cisco HXAP on KVM.

As we saw in the last blog, AWS Outposts is one way to bring the public cloud into your data center; Anthos is another. Both create a hybrid cloud infrastructure with a tight integration to the public cloud. Both set up a container-based compute environment for cloud-native development. Both give you access to their services "marketplace" and let you manage the whole thing from a single pane of glass. Aside from that, these are two very different approaches to creating a hybrid cloud.

Outposts is a 100% as-a-service experience, with AWS owning everything, installing it on site and managing it for you. With Anthos, you have to assume the configuration, acquisition and deployment duties, as well as deal with on-going maintenance of the infrastructure. But you can choose the hardware since Anthos on-premises runs on any hardware stack that supports VMware – even existing infrastructure. This includes HCI clusters or servers with DAS or network-attached storage systems.

After it's up and running, the Anthos platform brings a little piece of Google's cloud into your data center. For companies committed to Google and that want a hybrid cloud with the flexibility to choose the hardware, Google Anthos may be a good option. For those that need a Kubernetes-based solution on-premises but aren't "all-in" with Google's cloud, another platform may be better.