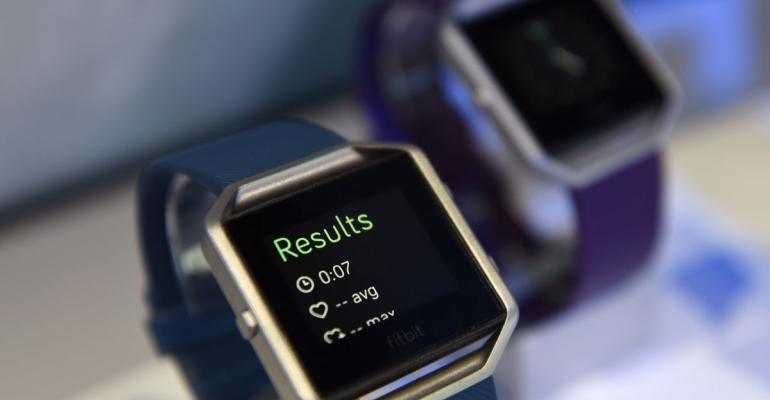 Fitbit Gains on Pact With Google Cloud for Health-Care Push

The partnership with Alphabet Inc.’s Google is the first sign that Fitbit Chief Executive Officer James Park is executing on his vision to rely less on consumers and more on the health-care industry. Fitbit’s slice of the wearable-device market has declined amid increasing competition.

(Bloomberg) --Fitbit Inc. jumped the most in two months after announcing a move to Google’s cloud computing service to help make data sharing easier across the health-care system, bolstering the struggling wearable company’s efforts to keep its fitness trackers relevant.

The partnership with Alphabet Inc.’s Google is the first sign that Fitbit Chief Executive Officer James Park is executing on his vision to rely less on consumers and more on the health-care industry. Fitbit’s slice of the wearable-device market has declined amid increasing competition.

With the agreement, Fitbit will have access to a new software tool from Google Cloud to encourage more integration of data in the health-care industry. For instance, information gleaned by Fitbit could be combined with electronic medical records to give clinicians more personalized data to help manage chronic health conditions. Fitbit’s shares gained 4.9 percent to $5.56 at 1:18 p.m. in New York, after earlier rising 9.8 percent for the best intraday increase since Feb. 14.

Google’s cloud division has made a more assertive push to win customers in health, an industry that’s historically been reticent about sharing data and renting computing storage and power from tech companies. The Google Cloud service Fitbit will be using, announced in March, lets companies analyze their information and cross-reference it with data from hospitals and other health-care providers. For example, the Cleveland Clinic, a partner with the Google service, can now more readily tap records from Fitbit users who visit the hospital.

“Working with Google gives us an opportunity to transform how we scale our business, allowing us to reach more people around the world faster, while also enhancing the experience we offer to our users and the health-care system,” Park said.

The deal could help San Francisco-based Fitbit navigate the complex web of health providers, although Google has yet to show that it has signed up a significant number of health companies for its cloud service.