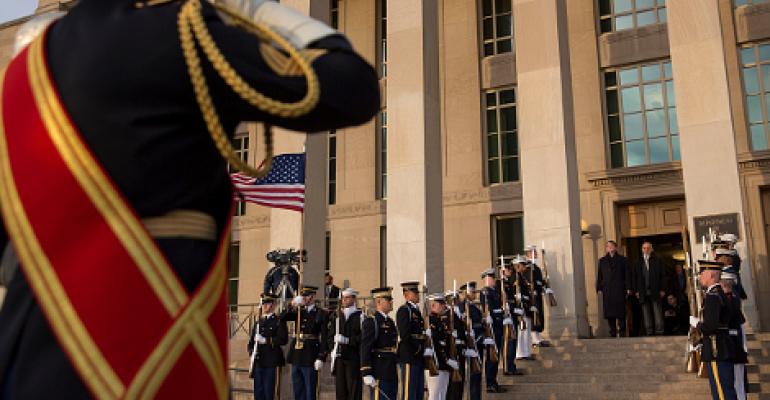 Amazon.com Inc. is asking a federal court to require the Pentagon to broaden the scope of a reevaluation of its decision to award Microsoft Corp. a controversial $10 billion cloud-computing contract.

(Bloomberg) -- Amazon.com Inc. is asking a federal court to require the Pentagon to broaden the scope of a reevaluation of its decision to award Microsoft Corp. a controversial $10 billion cloud-computing contract.

In a filing to the U.S Court of Federal Claims made public on Tuesday, Amazon said the Pentagon should revisit the procurement “with respect to all of the errors identified by the protest” filed by the company.

Earlier this month, government lawyers asked the court for permission for the Pentagon to take 120 days “to reconsider certain aspects” of its award decision. Among the issues the Defense Department wants to revisit are elements of the bidders’ price proposals and online marketplaces, according to the filing.

That request came after U.S. Court of Federal Claims Judge Patricia Campbell-Smith gave a boost to Amazon’s challenge in an opinion made public this month in which she wrote that the Defense Department might have misjudged part of Microsoft’s pricing proposal for the work.

Amazon Web Services, Amazon’s cloud unit, filed a lawsuit in November alleging that political interference by President Donald Trump cost the company the cloud deal. The contract is valued at as $10 billion over a decade. Amazon said in the suit that the Defense Department failed to fairly judge its bid because Trump viewed Amazon Chief Executive Officer Jeff Bezos as his “political enemy.”

Amazon previously argued that Microsoft’s bid failed to comply with a government requirement that the winner’s data storage be “highly-accessible” under one of six possible price scenarios. The government argued that Amazon was elevating “superficial labels over technical performance.” In its request to revisit the contract, the government said it would allow bidders to revise a problematic part of that pricing scenario.

Amazon’s Tuesday filing calls on the Pentagon to allow bidders to revise more of their pricing plans and to evaluate other alleged errors that Amazon is highlighting.

The Defense Department’s “proposed corrective action focuses on allowing Microsoft to fix its fatally deficient proposal, while paralyzing AWS’s proposed pricing in the face of planned changes to the” Defense Department’s request for proposals, Amazon said. “It does not promise to address the other procurement flaws in any meaningful way.”

Amazon has previously asked the court to allow it to question Trump, Defense Secretary Mark Esper, former Defense Secretary James Mattis, and Dana Deasy, the Pentagon’s chief information officer in order to gather evidence for its case. Judge Campbell-Smith said she would pause consideration of that motion until the contract reevaluation issue was resolved.

Amazon’s lawsuit seeks to prohibit the Defense Department from proceeding without a new evaluation or award decision. The Pentagon’s JEDI project is designed to consolidate the department’s cloud computing infrastructure and modernize its technology systems.