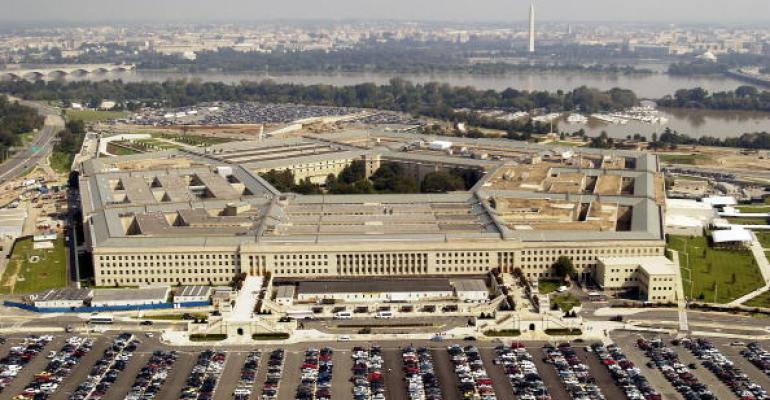 Andy Dunaway/USAF via Getty Images
Aerial photo of the Pentagon in Arlington, Virginia, in September 2003
Cloud Computing and Edge Computing>Hybrid Cloud and Multicloud

Amazon.com Inc. and Microsoft Corp. are the last competitors standing in the Pentagon’s winner-take-all competition for a $10 billion cloud services contract, the Defense Department said. The announcement eliminates Oracle Corp. and International Business Machines Corp. from the running.

(Bloomberg) -- Amazon.com Inc. and Microsoft Corp. are the last competitors standing in the Pentagon’s winner-take-all competition for a $10 billion cloud services contract, the Defense Department said.

The winnowing of the field came as the Pentagon said it’s determined that the acquisition process for the contract wasn’t tainted by alleged conflicts of interest, allowing final selection to move ahead, according to Smith.

Amazon and Microsoft have been widely viewed as front-runners in part because they have obtained higher-level federal security clearances.

Representatives from Oracle, Amazon, Microsoft and IBM declined to comment.

The Pentagon had initially said it would choose a winner this month, but after investigations and a protracted legal battle, the soonest the contract will be awarded is mid-July, according to Smith. She also revealed that alleged unethical conduct by a former Defense Department employee has been referred to the department’s inspector general.

The Joint Enterprise Defense Infrastructure cloud -- or JEDI, an acronym intended to evoke “Star Wars” imagery -- is intended to serve as the primary data repository for the military services worldwide.

The Pentagon disclosed in February that it was reviewing new information about potential conflicts of interest related to the procurement that involved Deap Ubhi, a former employee at a high-level Pentagon technology unit.

The revelations emerged amid a court battle with Oracle, which filed a lawsuit in December in the U.S. Court of Federal Claims alleging that the contract was marred by conflicts of interest and unfair requirements.

The lawsuit followed months of lobbying by tech companies. including Oracle, that banded together in an informal coalition to urge the Defense Department to split the contract among several suppliers. The department has said that making multiple awards under current acquisition law would be a slow process that could prevent it from quickly delivering new capabilities to warriors.

Oracle’s lawsuit alleged that Ubhi helped design the cloud contract to be favorable to Amazon while negotiating to sell his company to the e-commerce giant. Ubhi joined the Defense Digital Service, the Pentagon’s technology-focused division, in 2016. While there, he worked on the JEDI procurement and advocated “robustly” in favor of pursuing a single-award strategy for the procurement, Oracle’s lawsuit contends.

Ubhi, a former Amazon Web Services employee, disclosed to the Defense Digital Service in October 2017 that his restaurant reservation company, Tablehero, was discussing a partnership with Amazon. Ubhi then recused himself from working on the procurement and two weeks later resigned from the Defense Department, according to the lawsuit.

The government argued in court documents that Ubhi was involved in the JEDI procurement only in the very beginning of its development and a "robust debate" about the acquisition strategy continued after he left.

The department’s investigation “determined that there is no adverse impact on the integrity of the acquisition process,” Smith said. The Pentagon will ask the court to lift a stay in the case that it had requested to review the allegations.