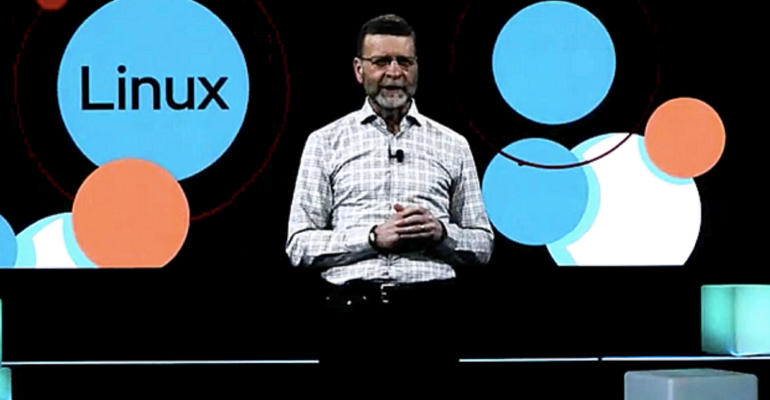 Edge isn't just an isolated endpoint for Red Hat; it's part of a larger hybrid cloud computing strategy that was advanced at the Red Hat Summit.

IBM's Red Hat business unit has rolled out a series of platform updates that aim to expand the Linux vendor's portfolio for hybrid cloud and edge computing deployments.

The new updates were announced on May 10 at the Red Hat Summit held in Boston and virtually.

Among the announcements was Red Hat Enterprise Linux 9, which is the latest update of the company's flagship operating system platform. The new release provides more security and edge deployment options than prior releases.

Red Hat also announced a set of cross-portfolio edge capabilities that help organizations deploy cloud capabilities on-premises, in the public cloud, and at the edge of the network.

"It's a hybrid world, and edge is part of that hybrid environment," Red Hat President and CEO Paul Cormier (pictured) told ITPro Today. "CIOs are going to have applications running within their data center, they're going to be on multiple clouds, and now they have to worry about the apps that are running out on the edge."

Why Edge Matters to the Cloud and Red Hat

The edge — whether it's a vehicle, a cellular phone tower, or a retail location — is a growing area of computing. Now, connecting compute capacity from the cloud to the edge can all be controlled with Red Hat tools.

From its earliest days, Red Hat has worked to enable the Linux operating system on nearly any type of hardware, according to Cormier. Edge computing often can have an entirely different set of hardware than what's used on-premises or in the public cloud, he said.

"Users can now run any app as a container, not only in the data center or in the cloud, but also now out to edge devices," Cormier said.

The Importance of Hybrid Cloud Computing to Red Hat

Enabling containers to run using the same operating system across different deployments is only one part of the Red Hat approach to the edge.

Red Hat Advanced Cluster Management (ACM) is also a big part of the company's edge strategy, Cormier said. With ACM, workloads can be managed in a consistent approach wherever they are and however they are deployed.

Red Hat has long focused on supporting hybrid cloud, and for Cormier the edge is a part of a hybrid architecture.

"We're not looking to make a disconnected cash register or something like that," Cormier said. "The edge really is part of the connected architecture that is hybrid."