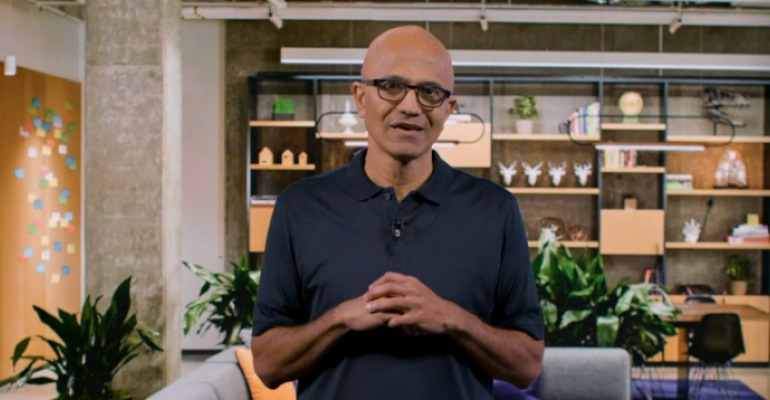 Microsoft Ignite 2022 Shows Users How To Do More With Less

Microsoft CEO Satya Nadella unveiled a raft of updates and services at Ignite 2022. Learn how these innovations aim to help businesses change the way they work.

At the first in-person Microsoft Ignite conference since 2019, CEO Satya Nadella began his keynote by noting the ongoing challenges of the past few years: political upheaval, supply chain difficulties, and cyber threats, to name only a few. Nadella argued that the way forward is through “continued and accelerated innovation.” Although businesses fortified with digital capabilities have proven to be the most resilient, it is time to move beyond resilience, he said. Instead, business must now focus on “digital perseverance” – making work simpler and realizing greater outcomes in quickly evolving workplaces.

Be Data-driven and Optimize With Azure

“Azure is the only cloud that supports all organizations and all workloads from enterprises to startups to highly regulated industries,” Nadella said. “Azure is the world’s computer.”

In the spirit of extending Azure further, Nadella revealed that IT pros can use the Azure Arc hybrid cloud platform to run Azure Kubernetes Service (AKS) on Azure Stack HCI, Windows Server, Windows devices, and Windows IoT. Nadella promised to enable AKS to run on platforms other than Windows in the future.

Deliver Efficiency With Automation and AI

“When it comes to doing more with less, AI is the ultimate amplifier,” Nadella said.

Microsoft introduced Azure Container for PyTorch, which integrates the PyTorch machine learning framework with software for training and inferencing, tested and optimized for Azure.

Nadella said that Microsoft's advancements in AI and machine learning emphasize responsibility. He pointed to the Responsible AI Dashboard allows users to evaluate the performance and fairness of AI models.

Innovate With a Cloud Developer Platform

Nadella emphasized the importance of AI-assisted coding software such as Github Copilot, which gives developers new tools in which to write better code with greater efficiency. Future experiments with Github Copilot Labs include “Explain Code,” which allows you to highlight a block of code and see what it does in plain English, and “Translate Code,” which allows you to translate code from one language to another.

Nadella noted that there are more announcements to come at GitHub Universe, a conference taking place next month.

While Microsoft promises exciting advancements for developers, Nadella stressed the importance of empowering everyone in a workforce. That can be done by aligning workers with company goals, resisting productivity paranoia, and re-recruiting workers over the course of their employment.

“Organizations require a new system in order to build human, social, and knowledge capital across the entire organization,” Nadella says.

In the past year, Microsoft has introduced over 450 capabilities. Among these innovations is Intelligent Recap, which highlights the most important moments in meetings and provides users with notes; Mesh avatars that allow workers to gather virtually in meeting spaces; Microsoft Edge, which provides business leaders with their own browser; and Microsoft Edge workspaces, which allow multiple users to search on a single browser. Nadella announced Microsoft Places, a virtual meeting space that allows employees to gather in a metaverse boardroom. Places will be available next year.

Protect Everyone, Everything, and Everywhere

The final imperative is to make user data more secure through cloud-enhanced software updates. New Windows 11 features focus on identifying and attacking cyberthreats in real time. “The more agile you become, the more your security team struggles to assess risk. The more connected we become, the more successful an attacker can move laterally through the enterprise to their target,” Nadella said.

The Ignite keynote closed with a look back at some of Microsoft’s philanthropic successes, highlighting their commitment to aiding nonprofits with technology discounts and grants to help them meet unprecedented demands.