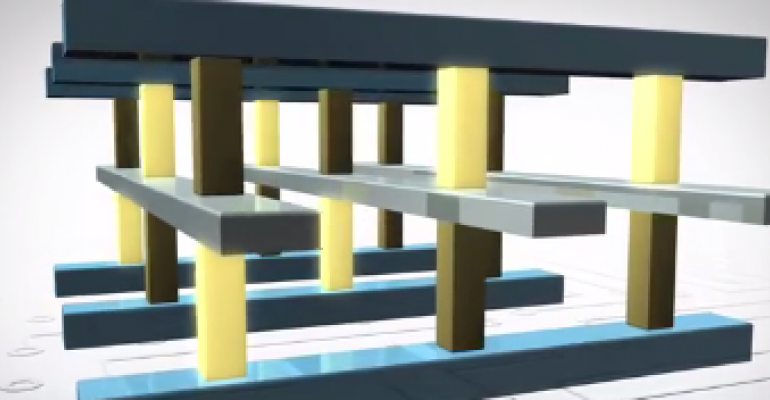 3D XPoint Technology Could Be a Boon for AI, ML

Intel's and Micron's 3D XPoint Technology could have a significant impact on data analytics and other workloads that require high performance.

Intel and Micron have unveiled a new memory technology called 3D XPoint (pronounced cross point) that promises transfer speeds 1,000 times faster than current SSDs. If the 3D XPoint technology delivers, 3D XPoint could be a significant breakthrough, especially for companies that want faster performance for workloads and are looking to embrace artificial intelligence and machine learning throughout their organizations.

The 3D XPoint technology, a transistor-less cross point architecture, creates a “three-dimensional checkerboard” where the memory intersects between word lines and bit lines, according to Micron. This allows the cells to be addressed individually so that data is written and read in small sizes. The read/write process is more efficient, according to the company, and it could one day lead eliminate the need for discrete RAM systems.

“This can translate into having better real-time analytics, which can be critical in certain application use cases like fraud detection, genomics research, artificial intelligence, machine learning and video analysis,” said Unsworth. “Also, this could allow greater capacities of high-performance nonvolatile storage, which could have TCO advantages, but this would vary by application workload and customer usage.”

According to Unsworth, the key to 3D XPoint technology is in how much the memory system can improve processes that necessitate substantial computing resources.

Rob Crooke, senior vice president and general manager of the Non-Volatile Memory Solutions Group at Intel, focused on the potential long-term impact of this upgrade during the product announcement.

“It is a fundamentally different technology from the technologies that we typically see with storage or memory technologies, both in the physics as well as the attributes it brings to the computing system,” he said.

Mark Durkan, CEO of Micron, predicted how the technology could expand beyond storage.

“Think of all the ways that you use pattern recognition in your life today, whether it’s speech recognition on your phone or car, whether it’s voice recognition, face recognition--all the biometrics you want to use in the future for security, the games you play, and hand gestures,” he said. “With all of those types of pattern recognition activities, to get really high fidelity requires really large data sets to  be matched. A new memory like this can deliver a new world of security methodologies and recognition activities. I think you’ll see a sea change as this memory is deployed in situations like that.”

The speed of processing data is a key area of focus, with potential benefits for analyzing large data sets in health care, financial research and many other high-tech fields.

Unsworth said PC usage has so far been limited, with most of the interest focused on data centers. Market Research Future predicts that the 3D XPoint Technology Market could be worth $5 billion by 2022.

Because 3D Xpoint memory doesn’t depend on the electron flow or transistors, it will last considerably longer compared to flash memory. According to the announcement, Intel will be selling  375- and 750-gigabyte drives for data centers and workstation drives with 280- and 480-gigabyte capacities.