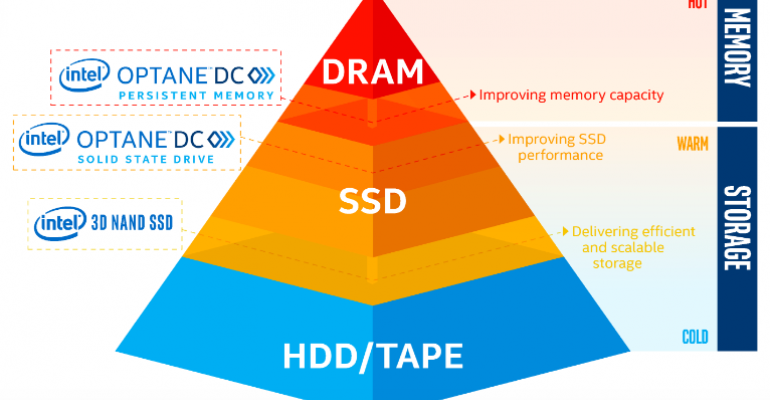 3D Xpoint Memory: How Intel is Bringing Persistent Storage to the Motherboard

3D Xpoint memory, which Intel has branded as Optane DC Persistent Memory, retains its data, even when the system is powered off.

Those who need to run high-performance databases--or other high-demand, data-driven applications--have long had two choices for doing so. The old tried-and-true option is to run the database from a hard disk. The more modern of the two options is to run the database in RAM. Memory far outperforms even the fastest HDD or SSD storage, but is far from being a perfect solution. After all, memory has a much higher price per gigabyte of storage than disk-based solutions. Even if cost were not an issue, though, there is a limit to how much memory a system board can accommodate. Perhaps most important of all is the fact that memory owes its speed at least in part to its non-persistence. If the computer is shut down or rebooted, then all of the data is flushed from the system’s memory.

Even though memory and disk have long represented the only real storage options, a third option is now available: 3D Xpoint memory. If 3D Xpoint memory sounds familiar, it is probably because it was announced several years ago. In spite of that announcement, however, 3D Xpoint memory has not been available until just recently.

For those who might not be familiar with the technology, 3D Xpoint memory is designed to act as a sort of “in between” solution. You can think of it as a hybrid mix of RAM and disk storage.

DDR4 memory supports clock speeds of up to 3200 MHz, with a theoretical data transfer rate of up to 25,600 Mbps. This is far faster than SSD storage. For the sake of comparison, consider Samsung’s 960 Pro storage, which is an M.2 form factor, 48-layer SSD that is available in capacities of up to 2 TB. Samsung lists the sequential read speed as 3500 MB per second and the sequential write speed as 2100 MB per second.

Intel also describes the memory as being secure, with support for hardware-level encryption. Perhaps more importantly, though, Intel has designed its new persistent memory to be cost effective while also offering a high capacity. Intel has indicated that the memory will be available in 128, 256 and 512 GB modules, and that capacities of 3 terabytes or more can be achieved for each of a system’s CPU cores.

It remains to be seen how well Intel’s Optane DC Persistent Memory will ultimately perform, and what the price will be. For right now, Intel is only making its new persistent storage memory available to a few select customers, but wide availability is expected in 2019. Even so, this new memory platform seems as though it will be an attractive option for running in memory databases.