HP to Cut Up to 6,000 Jobs Over Three Years as PC Demand Falters

HP, which makes most of its money by selling computers, has been navigating a sustained downturn in PC demand. The company will look to invest in new lines of business such as subscription services.

(Bloomberg) -- HP Inc. will eliminate as many as 6,000 jobs over the next three years amid declining demand for personal computers that has cut into profits.

Earnings, excluding some items, will be $3.20 to $3.60 a share in the fiscal year ending in October 2023, HP said Tuesday in a statement. Analysts, on average, projected $3.61 a share, according to data compiled by Bloomberg. Free cash flow will be about $3.25 billion, which also falls short of estimates.

The forecast assumes a 10% decline in computer sales in the fiscal year, Chief Executive Officer Enrique Lores said in an interview. “We expect a challenging market environment,” he said.

HP, which makes most of its money by selling computers, has been navigating a sustained downturn in PC demand. It began with lower-end consumer products but has spread as companies reduce their workforces and curb technology investment, Lores said. Industry analyst Gartner Inc. said global PC shipments declined almost 20% in the third quarter -- the biggest fall since it began tracking the metric in the mid-1990s. Dell Technologies Inc., which generates 55% of its revenue from PC sales, on Monday gave a lackluster outlook for the current quarter and said some customers have “paused purchases” in the near term.

To manage costs, HP will cut as much as 10% of its 61,000-employee global workforce over the next three years and reduce its real estate footprint, Lores said. The company will incur an estimated $1 billion in restructuring charges, with about 60% in fiscal year 2023, which began this month. By the end of fiscal 2025, the plan should save as $1.4 billion a year, HP said in the statement.

“It’s an acknowledgment of the new realities of the printing and PC market,” said Woo Jin Ho, an analyst at Bloomberg Intelligence.

Shares gained about 1% in extended trading after closing at $29.38 in New York. The stock has dropped 22% this year. 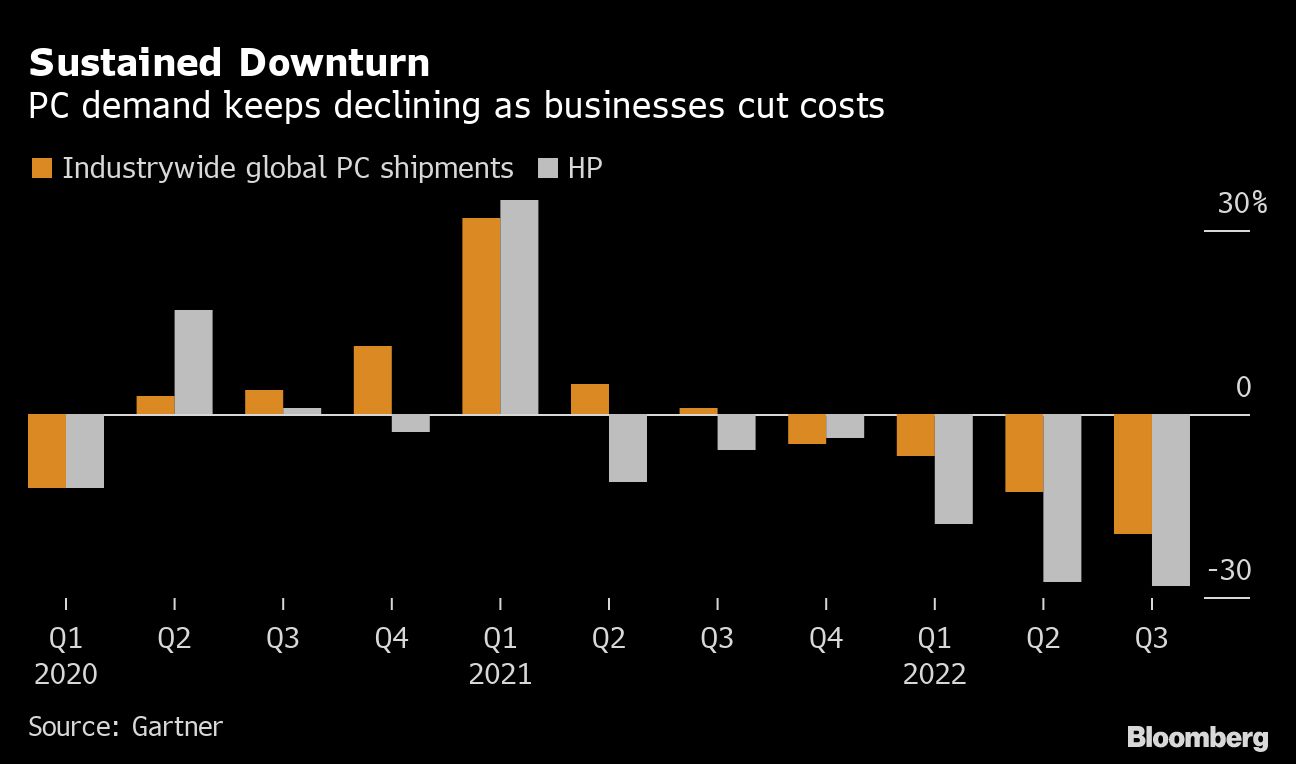 Numerous technology companies have announced workforce reduction plans in recent weeks. Meta Platforms Inc. and Amazon.com Inc. each began cutting about 10,000 jobs while Twitter Inc. wiped out more than half its staff of 7,500 employees. Hard-drive maker Seagate Technology Holdings Plc. said it would cut about 3,000 jobs while Cisco Systems Inc. last week unveiled a plan to reduce an unspecified number of jobs and close offices.

HP, which also makes printers, will look to invest in new lines of business such as subscription services. The Palo Alto, California-based company already offers ink subscriptions, and it will now explore plans for other products like printer paper and computers, Lores said.

Sales in the Personal Systems Group, which includes the computer business, fell 13% to $10.3 billion, led by a 25% drop in consumer revenue. Sales in the Printing unit dropped 7% to $4.5 billion, which beat estimates.