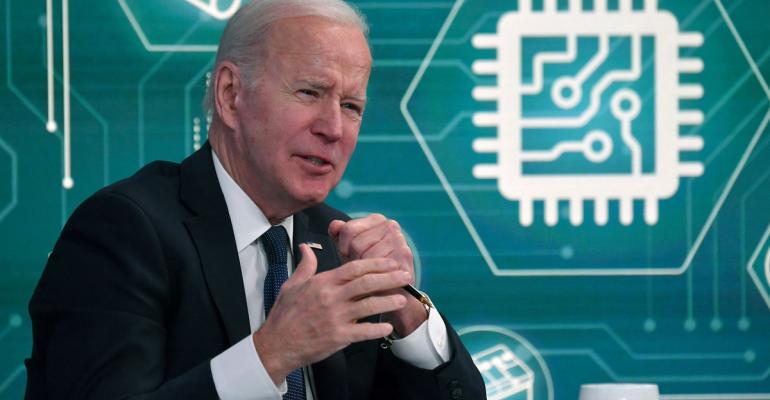 Washington and Beijing are locked in a race to develop the underpinnings of future technologies like quantum computers, which promise to exponentially multiply the power and speed of today’s processors.

(Bloomberg) -- President Joe Biden will sign directives on Wednesday aimed at preparing the U.S for a new era of quantum computing, as Chinese agencies and companies pour billions of dollars into the next-generation technology.

The Biden administration wants America’s most vulnerable IT systems to adopt new cryptographic standards that can resist the potential threat of code-cracking posed by quantum computing, a nascent technology that does not yet exist at viable scale.

Federal agencies will have to develop comprehensive plans to safeguard American intellectual property, research and other sensitive technology from acquisition by America’s adversaries, plus educate industry and academia on the threats they face, the White House said, without naming specific countries.

“America must start the lengthy process of updating our IT infrastructure today to protect against this quantum computing threat tomorrow,” according to a fact sheet the White House issued on the directives. A new national security memorandum “provides a roadmap for agencies to inventory their IT systems, with a requirement to set and meet specific milestones.”

Washington and Beijing are locked in a race to develop the underpinnings of future technologies, from semiconductors and ultra-fast networking to quantum computers, which promise to exponentially multiply the power and speed of today’s processors. China is spending billions of dollars on quantum research and experts worry that the theft of encrypted data -- some of which is intended to stay private for decades -- could one day be cracked at scale.

In January, the Biden administration mandated national security systems to develop new algorithms to protect vital information, but much of the private sector and wider federal government has yet to explore the issue closely. The National Security Agency has predicted that shifting to new quantum-resistant cryptography could take 20 years.

The National Institute of Standards and Technology, or NIST, is shortly due to announce the winning quantum-resistant algorithms from a multiyear search, which is now down to seven finalists.

In-Q-Tel, the CIA’s venture capital arm, is among those funneling capital into the arena. It’s invested in Google-spinoff Sandbox AQ, which is developing quantum-resistant software architecture that can accommodate the winning NIST algorithms. The company’s first round of fundraising reached “well into the nine figures”, Sandbox AQ Chief Executive Officer Jack Hidary told Bloomberg.

But scientists differ over when computationally relevant quantum computing will arrive, however, with estimates varying between five and 50 years, if at all.

“I really believe that ‘never’ is highly unlikely,” Rob Joyce, director of cybersecurity at the National Security Agency, told Bloomberg in an interview. “We know it’s coming. It’s an engineering problem today. And the question is when, not if, a quantum computer emerges?”

Joyce said it was important to start the transition to quantum-resistant algorithms early. “One of the challenges is we need to be secure against quantum-computing challenges of the future so that if one shows up in 20, 30 years, our information today is protected across that same lifetime,” he said.

Under Wednesday’s changes, NIST will establish a project to support the widespread migration in the U.S. to post-quantum cryptography, and work with industry to encourage broad adoption of the new standards.

The National Quantum Initiative Advisory Committee, an independent body of experts formed in 2020 to advise the federal government, will also now report directly to the White House rather than jointly to the Department of Energy.

A senior administration official said that effort was intended to foster promising applications in quantum information science, or QIS, saying recent developments in the field have “shown the potential to drive innovation across the American economy,” citing energy, medicine, computing, networking and sensing.

“Much like the earlier technological revolutions brought about by the Internet, GPS, and even the combustion engine, advances in QIS are poised to generate entirely new industries, well-paying jobs, and economic opportunities for all Americans,” the official added.