brought to you by
Data Center>Hardware

Imaging the Earth's Depths, at 750 Watts a SF

CyrusOne's Houston data center is hosting the Kaleidoscope Supercomputer, which uses 120 teraflops of computing power to locate oil reserves buried thousands of feet below the seabed. 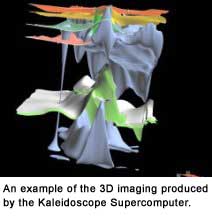 The search for oil on the ocean floor begins on the data center floor. Long before drilling gets underway, the data-crunching commences in places like the CyrusOne data center in Houston, where the Kaleidoscope Supercomputer applies 120 teraflops of computing power to generate digital images of oil reserves buried thousands of feet below the seabed.

Not every data center can handle the demands of supercomputers like Kaleidoscope, which is powered by 600 IBM PowerXCell 8i processors in eight cabinets that occupy just 22 square feet of floor space in the CyrusOne data center. That works out to 750 watts a square foot of power.

"To meet the Kaleidoscope Supercomputer's ultra-dense requirements and guarantee optimal installation and future-proof performance, we needed a colocation solution that delivered superior high-density capabilities across the board," said Francisco Ortigosa, Repsol's chief geophysicist and project leader.

CyrusOne is based in Houston, which is home to the U.S. energy industry, and thus is familiar with the demands of seismic imaging applications. The small footprint of Kaleidoscope is a reflection of efforts to make these installations less sprawling and more energy efficient.

"We recognize this installation as the start of a trend of ultra-dense green supercomputers that will lead to affordable peta-scale capacity in the near future," said CyrusOne senior vice president Blake McLane. "In the short term, the evolution of the PowerXCell 8i processor will increase by four times the computing power within the same footprint. This additional power, however, requires a robust data center infrastructure that can support maximum power and cooling."

Running on PlayStation Power
The Cell microprocessor was jointly developed by Sony Computer Entertainment, Toshiba, and IBM. Cell is perhaps best known for powering the Sony PlayStation 3 gaming console, but has distinguished itself in supercomputing, with the PowerXCell 8i powering the world's fastest supercomputer, the IBM Roadrunner.

The Kaleidoscope installation at CyrusOne employs Reverse Time Migration (RTM) seismic imaging algorithms, which Repsol says provides unparalleled precision and enables it to search for oil fields at greater depths, and do so faster than technology currently being used in the industry.

"The Kaleidoscope Project redefines subsurface imaging capabilities, moving from a standard of approximations and best-guesses due to lack of computing power to one of precise algorithms designed for a new generation of processors," said Ortigosa. "This opens up new commercial opportunities in hard-to-reach subsurface regions around the world."