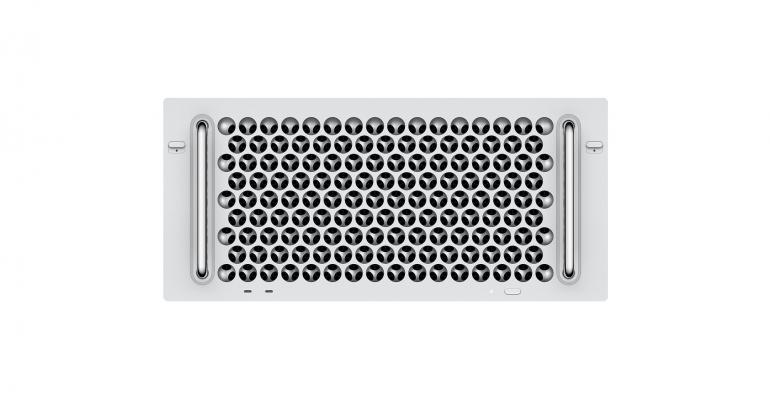 The Apple brand is once again data center-bound. The company has come out with a rack-mountable, data center-ready version of its latest Mac Pro, which launched in its traditional PC tower form factor in December.

The 4U rack-mounted version, which came out early this month with little fanfare, represents a return to the data center market after a nine year absence for Apple. The company pulled the plug on Xserve, its last rack-mounted server, in January 2011, and began recommending Mac Pros and Minis to server customers. Its stated rationale for introducing Xserve in 2002 had been that customers were unhappy using Apple desktops as servers.

You're probably going to think more than twice before placing an order to fill your racks with Mac Pros, however. They're priced between $6,499 ($500 more than the workstation version with the same specs) and $54,048.

That high-end number is not a typo.

Also, the $500 discount for the desktop tower might not be the deal it seems. Evidently, when ordered with some configurations a Mac Pro tower might be heavy enough to require a set of wheels, which Apple will happily sell you -- for $400.

The new Apple server may not give you a lot of "bang for your buck," but it does come with plenty of bang. The bare-bones model comes equipped with an 8-core Intel Xeon W CPU, 32GB memory, a Radeon Pro 580X GPU, and 256GB SSD storage. If you go whole-hog and order one fully loaded, you'll get a 28-core 2.5GHz processor from the same family, a whopping 1.5TB memory, 2x AMD Radeon Pro Vega II Duo GPUs, and 4TB SSD storage.

Additionally, the all-the-way version comes with an Afterburner ProRes and ProRes RAW accelerator card for video processing, which is priced at $2,000 on Apple's a la carte menu.

By now you probably understand that Apple's not going after the lowly web server, or even the high-performance artificial intelligence markets with these babies. Although MacStadium, a Mac-as-a-service data center operator for Mac developers, has been installing them and publishing  impressive benchmark results for things like NodeJS thread builds, that's probably not much of a marketing focus either.

The most likely immediate uptake here will be by media makers -- the traditional market for high-end Macs -- where they'll be augmented with other audio and video production hardware.