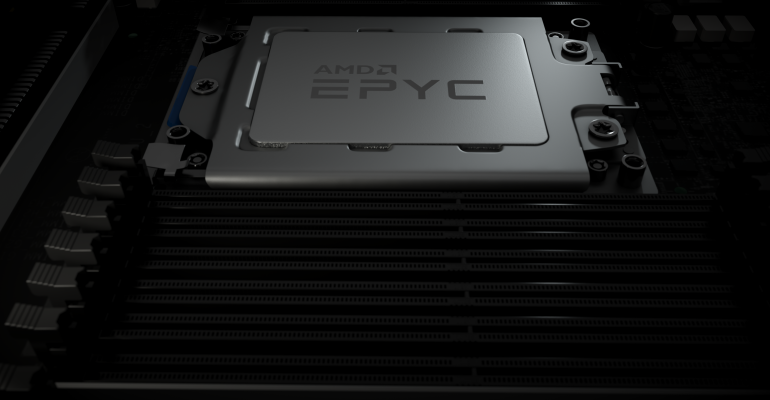 Servers powered by the new chips are also said to cost much less to run in a data center because of the record amount of CPU cores AMD’s leading 7nm process technology enables it to pack in a single chip, sitting in a single socket on the server motherboard (although a two-socket configuration for maximum performance is also available). Single-socket servers require a lot less power and cooling capacity than dual-socket ones, meaning customers can get more processing power without having to expand data center capacity.

“It’s right smack in the heart of what server customers need: more performance per rack in the data center,” Mark Papermaster, AMD’s CTO and executive vice president, said from stage at the second-gen Epyc launch event in San Francisco.

Hewlett Packard Enterprise launched three ProLiant servers powered by the new chips Wednesday, and the company’s CTO Mark Potter said it will have 12 systems by the end of the year; Dell EMC expects to add second-gen Epyc servers to its portfolio this fall, according to CTO of its server infrastructure and systems group Robert Hormuth; Lenovo announced two systems.

There are 12 products in the AMD Rome server processor line, ranging from 8 cores to 64 cores per chip. In one of the performance comparison test results presented by AMD executives (using the SPECrate 2017 int-peak benchmark), the top-of-the-line 64-core AMD Epyc 7742 processor showed double the performance of the top-of-the-line 28-core Intel Xeon Platinum 8280M. The Intel part's list price is about $13,000, while the AMD part comes at just under $7,000. 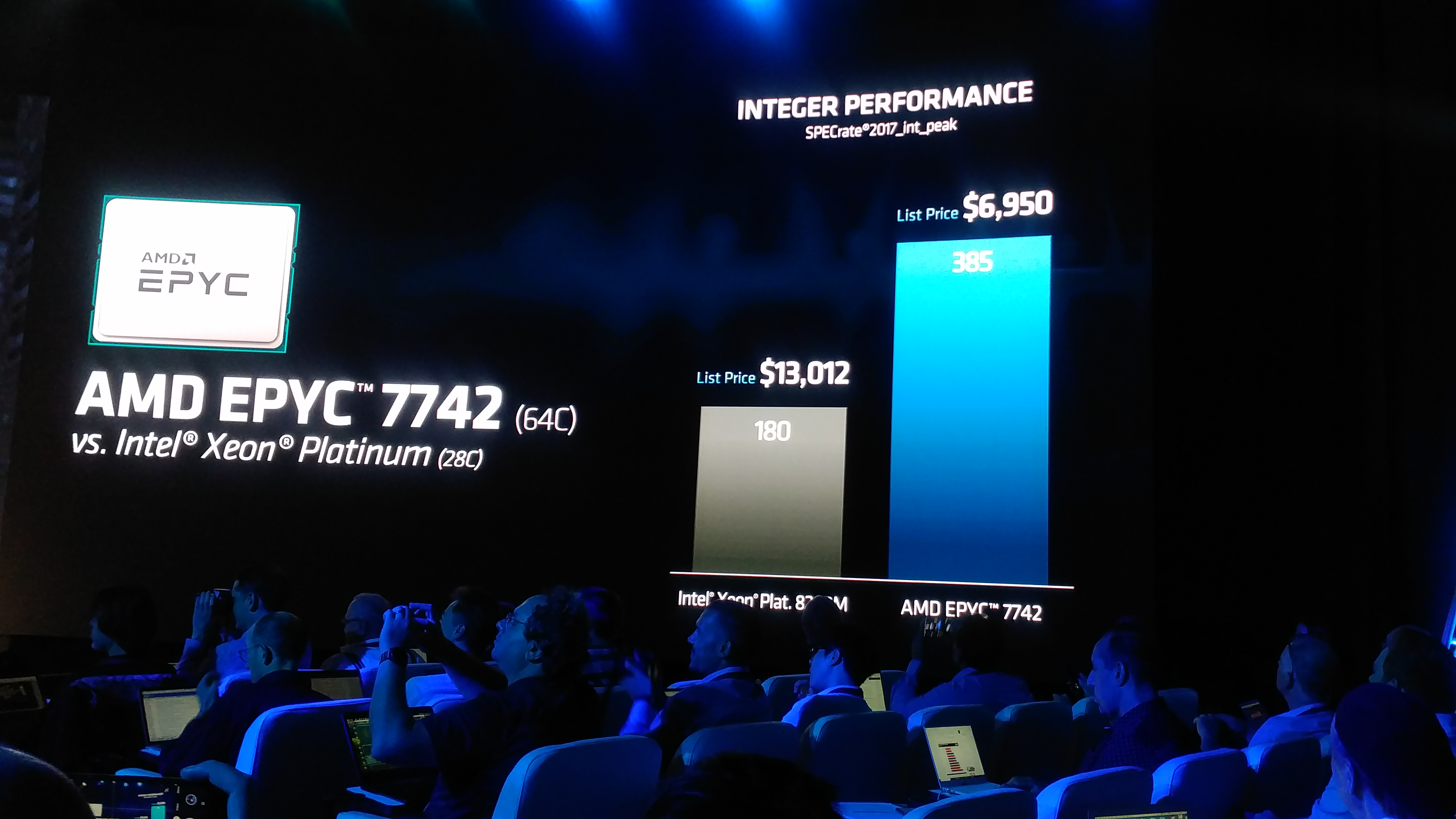 A slide from the AMD Epyc 2 launch event

“Now it comes to a … broader conversation, with the single-socket advantage that you see there,” Donovan said.

The launch puts AMD well ahead of Intel in terms of performance, threatening to erode the near-monopoly Intel has been enjoying in the data center market beyond the erosion it caused starting in 2017 with the launch of the first-generation Epyc, codenamed “Naples.”

Speaking at the launch event, AMD CEO Lisa Su said cloud providers collectively offered 50 different types of cloud instance types powered by the first Epyc. Those cloud providers include two of the world’s largest – Amazon Web Services and Microsoft Azure – as well as smaller providers, such as Tencent, Baidu, Packet, Oracle, and OVH, among others.

According to Su, the first company to deploy second-generation Epyc chips in its data centers in production is Google. Sharing the stage with her, Google's VP of engineering Bart Sano said the company was "already seeing some great performane on a variety of workloads" with the new servers.

Sano also announced that Google, which until now has been absent from the list of cloud providers offering AMD VMs, will soon launch them, powered by the second-gen Epyc chips. These will be the most powerful general-purpose VMs available to Google Cloud users, he said.

One new AMD customer is Twitter, which will be launching second-gen Epyc servers in its data centers later this year, Jen Fraser, Twitter’s senior director of engineering, said at the launch event.

Its high core density allows the company to pack a lot more performance in a single rack, using the same footprint and power and cooling resources. Instead of the current 1,240 per rack, Twitter will be able to go up to 1792 cores per rack, Fraser said.

“This is where Rome is actually hitting that sweet spot in Twitter data centers.”