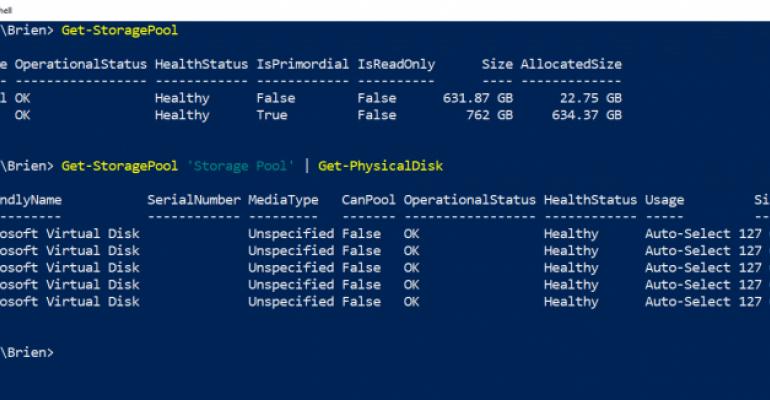 How to Plan Ahead for Windows Storage Spaces Performance and Scalability

With Windows Storage Spaces, the number of disks in a pool impacts performance and scalability.

Windows Storage Spaces is designed to, among other things, make storage consumption far more flexible than it might otherwise be. With Storage Spaces, a system’s physical disks are placed into a storage pool, and the pool’s storage can then be used on an as-needed basis. An admin might, for example, create a three-way mirrored volume and a parity volume from disks belonging to the same pool.

Even though Windows Storage Spaces gives you the freedom to use your raw storage in whatever way makes sense at a given moment, it is important to take some time and consider how many disks to include in the storage pool. That one simple decision will ultimately impact both performance and scalability.

To demonstrate why this is the case, take a look at Figure 1. This particular machine contains two storage pools: the primordial pool and a pool named simply “Storage Pool.” Storage Pool contains five physical disks.

This machine contains a storage pool that is made up of five disks.

Now, let’s take a look at the disks that have been created on top of Storage Pool. The command that I am using is:

There are, of course, easier ways to display your collection of virtual disks, but I am using this particular command because it includes information on columns and data copies. You can see the command and its output in Figure 2.

This output shows the number of columns associated with each virtual disk.

As you look at the figure above, you can see that there are three virtual disks built on top of Storage Pool. There are two mirror spaces and one parity space. The mirrored virtual disks are two-way mirrors, as indicated by the Number of Data Copies field.

The main thing I wanted to show in the figure is the column count. The column count indicates the number of disks across which data is striped. In the case of the parity disk, for example, data is being stripped across three drives, hence the column count shows a value of 3.

Figure 3 shows the interface used to create a new storage space within a storage pool. As you look at this screen, you will notice that although Storage Spaces tells you the minimum number of disks that are required for the type of virtual disk that you are creating, it does not give you the option of specifying the number of physical disks that you actually want to use. 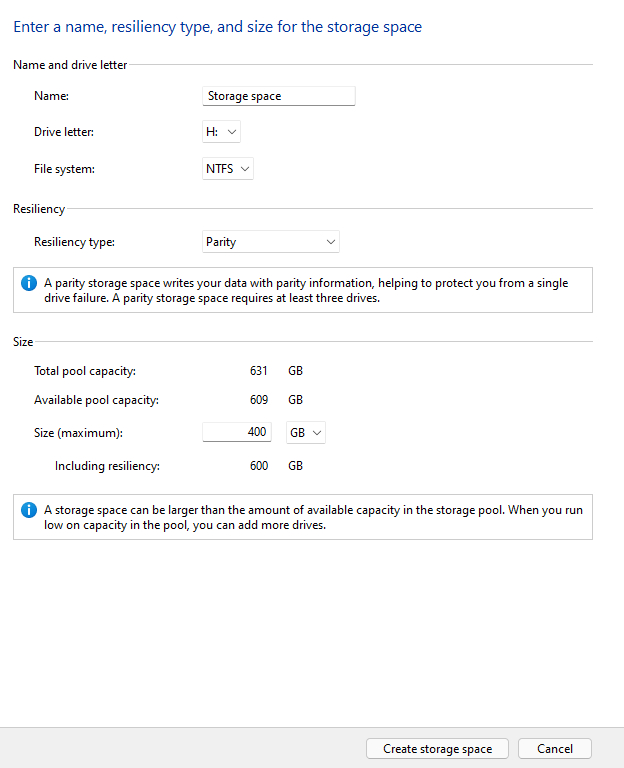 This is the interface used for creating a new virtual disk.

This matters because you can’t change a storage space’s column size once it has been created. If you want to increase the column size, your only realistic option is to create a brand new storage space and migrate all of your data to it.

As important as this may be, there is an additional implication that is perhaps even more important. Imagine that you have created a storage space that uses four columns. Let’s also pretend that this storage space’s performance is fine, but that you need to add some extra space to it.

All of this is to say that when you are creating a storage pool, it is important to think about how many disks to initially place in your pool, as well as the number of disks that you can potentially add to the pool in the future. These factors will play into the column size that you can get away with using on your storage spaces.

How to Reclaim Disk Space from Virtual Machines
Dec 06, 2021