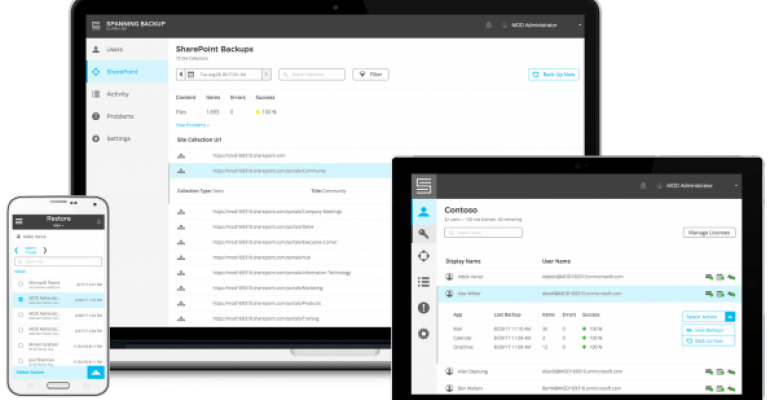 The new SharePoint Online backup capabilities will now allow business customers to seamlessly protect their data while moving away from on-premises SharePoint installations. The expanded protection is available immediately to customers as part of their existing subscriptions.

Mat Hamlin, Spanning's vice president of products, told ITPro that the new capability is designed to simplify the move to SharePoint Online for customers by protecting their data every step of the way in the cloud.

"We have seen increasing demand for protection for SharePoint Online," he said. "We protect against all of the data loss factors, especially human-caused data loss," such as user errors, attacks and more. "We make it easy for customers to find and restore their data."

The company's cloud-to-cloud backup and recovery services for Office 365 are tightly integrated with the Office 365 and SharePoint APIs which allows for point-in-time backups and granular restores of individual files, folders, and entire document libraries, according to a Sept. 21 post on the Spanning Blog. The backups are "built to meet the highest security and compliance standards including SSAE SOC 2 Type II certification, HIPAA, and FERPA, and we have data centers in North America, Ireland and Australia to support data residency and data sovereignty requirements," the post continued.

Spanning, which was founded in 2010 and delivered its first product in 2011, offers Spanning Backup for Office 365 starting at $48 per user, per year. Spanning had been acquired by EMC in October of 2014, which was then acquired by Dell. Earlier in 2017, Spanning, which has about 8,000 customers worldwide, was spun off by Dell into a separate business.

"Moving to the cloud provides organizations with many benefits, including improved collaboration capabilities, reduced costs and increased security — but it is not without risks," Spanning CEO Jeff Erramouspe said in a statement. "SharePoint Online is a vital tool for collaboration across enterprise teams and encompasses sensitive internal data. By extending Spanning's key benefits to SharePoint Online, we're protecting the data that's the most critical—and relevant—to the enterprise."