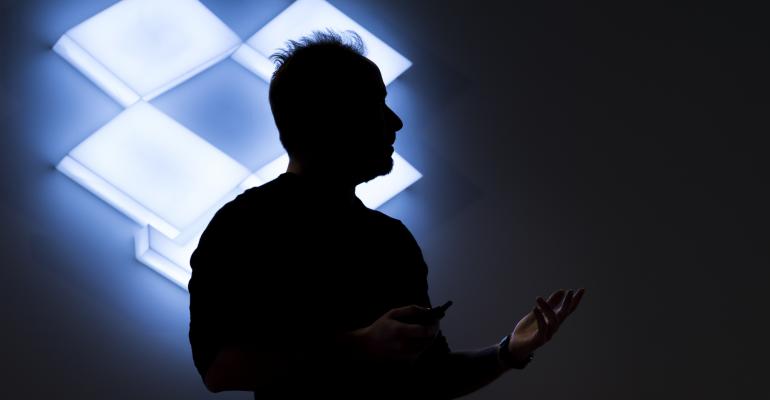 Dropbox Inc. proclaimed with its leap toward an initial public offering that it’s enabling “a more enlightened way of working.”

(Bloomberg) --Dropbox Inc. proclaimed with its leap toward an initial public offering that it’s enabling “a more enlightened way of working.”

Whether public market investors will endorse that vision with a premium remains to be seen.

Dropbox formally introduced itself to Wall Street Friday with a 235-page IPO document thick with Silicon Valley futurism. The San Francisco-based file-sharing company touts its business as a path to unleashing creative energy and inspired work.

“Imagine if we finished work every day knowing what we did really mattered,” Dropbox co-founders Drew Houston and Arash Ferdowsi wrote in a letter to prospective shareholders included in the filing. “This is possible, and Dropbox is connecting the dots. This is the world we want to live in.”

“We hope you’ll join us,” the pair wrote.

Dropbox has one big thing going for it: The file-sharing company still leads a market that it invented more than a decade ago. That helped propel revenue growth of more than 30 percent last year, to $1.1 billion. That’s twice the revenue of rival Box Inc. Dropbox is also moving closer to profitability, with its net loss shrinking to $112 million in 2017, down from $210 million a year earlier.

But is Dropbox worth more than the $10 billion private value it clocked in its 2014 funding round? Investors -- with IPO flops Snap Inc. and Blue Apron Holdings Inc. fresh in their memories -- are sure to ask some pointed questions before they get to “yes.”

Is this as good as it gets for Dropbox’s financials?

Last year’s 31 percent revenue growth shrunk from 40 percent in 2016 -- and the company warns that growth may continue to slow. Why? Lots of potential users already have Dropbox accounts, and competition is increasing. At the same time, the company warns that it hasn’t been -- and may never be -- profitable. While Dropbox has been tamping down on costs, the company says it’s now planning to restart investments, including hiring more engineers and designers. And oh, yes, its new headquarters comes with a rent hike.

How can Dropbox get more users to pay up?

The first two “risk factors” and “growth strategies” laid out by Dropbox in its filing address this perennial issue faced by every tech company that employs a so-called freemium model -- trying to get users to upgrade from the free service to get bells and whistles such as more storage or added features. Only 11 million of Dropbox’s 500 million registered users pay for the service. And even the 2 percent who pay are paying less on average, the company said. Average annual revenue per paying customer fell to $111.90 in 2017 from $113.50 in 2015, though last year was an improvement over 2016. Dropbox currently relies on word-of-mouth to sell its product, with 90 percent of revenue from people signing up through its website. It acknowledges that “lack of a significant outbound sales force may limit the potential growth of our business.” Investors are sure to want to know the company’s plans for addressing that.

Wait ... how many users does Dropbox really have?

The company has been touting its 500 million registered users since March 2016, but the IPO filing disclosed an interesting caveat: An unknown number of people may be double- or even triple-counted. “The actual number of unique users is lower than we report as one person may register more than once for our platform. As a result, we have fewer unique registered users that we may be able to convert to paying users.” And a fact that won’t be overlooked in the filing: If the number of registered users as of Dec. 31 was 500 million, does that mean it hasn’t grown since 2016?

Who keeps Dropbox’s management up at night?

The company expects competition to intensify for software that allows companies and people to work together on shared files. In addition to Box Inc., Amazon.com Inc., Apple Inc., Google and Microsoft Corp. are among the rivals that may have better name recognition, more products, bigger budgets and deeper client lists than Dropbox. Houston and Ferdowsi had fightin’ words for the competition: “We have a lot less baggage than the incumbents. The legacy office suites have had a good run, but they were designed for a world where the most important thing you did was print something out.”