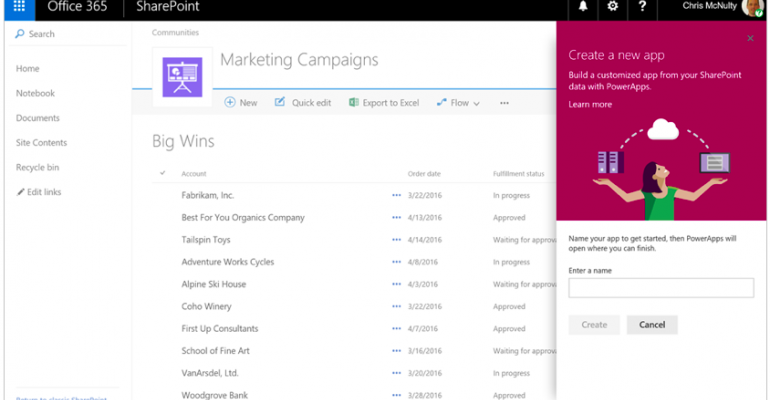 Cloud based Collaboration within Office 365

Office 365 is a great platform to use for any business size. The cost, time to implement and usage makes it a very compelling solution no matter on what features you wish to utilize. One topic that it is close to what I do is “Collaboration”. Most of the clients I work with require some level of collaboration between either internal groups, departments or external teams, probably like most of us do. This feature set is available within Office 365b and has been for some time. The core components historically have been SharePoint Online and OneDrive for Business. These are the core two that seem to be used extensively but there are others that can perform the same, if not more than the trusty SharePoint capabilities.

Too often when we migrate from SharePoint On-Premises we naturally move everything into those two components ass that is what we know well and the client normally has some affinity to using it, based upon skills and user adoption. Office 365 though has much more available to us for collaborating with others, depending on what type of collaboration is needed and wanted.

There are really a couple of collaboration types that most of us fall into:

These buckets cover most (probably not all scenarios) scenarios, and we will use this as the basis for our user features. Firstly, though let’s understand what Office 365 brings to the table:

We should all know what this is by now, as you have most likely been using SharePoint in some form On-Premises for some time now. SharePoint as you know stems back a number of years now and its sole purpose back in the 2001 days was for document collaboration and sharing and it did it really well. Today it does much more than just that, now we have specific templates for types of content, taxonomy, multiple services for data consumption and business process automation, as well as findability of all content. For the pure collaboration requirement SharePoint checks all the boxes, and could be used for any of user scenarios at all. However, the big issue here is getting people to into the system, however with the advancements in the overall Office 365 authentication stack it has become easier but there is still some limitations. Another limitation or should a say limit is the conversational element of collaboration. I hear you saying it, there is social though, and yes you are right but it is not designed in a way that it gets adopted as much as I think the initial intention was for it. There are still many out of context discussions and other things that take place outside of SharePoint that require someone to join the dots so to speak and store everything together. Don’t get me wrong I am big SharePoint advocate, I just think we need to carefully think through the requirements and use SharePoint when it makes the most sense instead of jamming everything into it when something else in the stack might work better.

This has been around for a while and has been the cause of much confusion with end users for some time now. The ability to store documents and files in a separate storage location that is tied to the organization and then personally to the end user has created two silos for storage similar to using On-Premises SharePoint and then File shares or personal drives. The ongoing battle of shared content, personal departmental content and then your own personal content has been the battle for some time.
OneDrive in the non-enterprise space is clearly defined, connected to outloo.com email as the file storage mechanism for files has been well received. For organizations, it has not been so nice. OneDrive for Business allows for building out deep structures and historically has had better external sharing capabilities which has meant in reality it has been used in the incorrect way.

Microsoft have done a great job recently on resetting the story along with better tools and a UX refresh across SharePoint and OneDrive to ensure consistent that it is becoming easier to tell the correct story. It clearly fills most of the end user scenarios we have, but that does not mean it should be used for them all. I would encourage an exercise to determine where it should be used and for what. An example would be for storing of company policies, though OneDrive can do it, that is not the correct location, SharePoint Online is. Take the time to do a feature and use comparison mapped to the user requirements to determine its viability.

What can I say here? Email is the center of the universe. People like to think they get away with less or not even using it, but they are just kidding themselves. It is still one of the top communication methods within organizations, even with all the social platforms and solutions.

Email will be here for a while yet and will always be a primary communication and collaboration platform. However, Microsoft have worked on some smaller features that allow for better integration of the two previous features directly into the mail client. So instead of attaching files, you of course can link to them, better than that though you can link them from the two core storage mechanisms without having to find the link, copy and paste and hope it works. Within Office 365, allowing linking or attaching of files with the ability to share goes a long way to making Email a true companion to the other features.

I wouldn’t expect to see any less email traffic, just more useful and easier emails that facilitate collaboration within the components where it belongs. Lastly of course, email does not meet all requirements for our scenarios, as it is not true document and file collaboration.

If you haven’t heard of Yammer yet, then you must have been sleeping for the past few years ☺
This is the contentious discussion that has been had the world over again and again and again. What is Yammer? Well it is in its own right, a web based group/team collaboration solution, that allows for “social context collaboration”, both internally and externally by creating an organizational network and then defining groups similar to SharePoint sites for collaboration. It does not have all of the true document management and enterprise collaboration features expected by most organizations but does facilitate the external connection very easily and great social.

It has become a long-standing debate purely based on the messaging that has or hasn’t come from Microsoft on where it fits within the overall stack compared to products such as SharePoint online.

For those organizations that utilize it now, it allows for great collaboration really based around activity and social context conversations that map to the overall reason and purpose of the site or content. These are all captured within the site allowing for someone to quite quickly follow the feed of collaboration by following the conversations and discussions.

Some investments have been made to allow single sign on and a better integration story to the rest of the Office 365 stack, but it still seems to go one way or the other when it comes to adoption. Right now, if you are looking for a solution to document collaboration combined with deep social interaction and discussions then Yammer works really well, especially with the integration now to SharePoint Online. This platform can meet all of our user scenarios easily albeit it, confined to the way Yammer does it.

A while back Microsoft made a lot of noise about their new Groups capability, it was going to be the future of collaboration for organizations as it combined some core components of Office 365 together in a way that had not been seen before, allowing for a better and more seamless user experience.

The group concept bought together, Azure Active Directory, Exchange Online with OneDrive for Business, this allowed users and teams to great an email enabled predefined site that allowed for document collaboration using the core capabilities found within OneDrive for Business and some pieces of SharePoint Online.

This allowed for these group sites to be surfaced easily within Outlook as well as via the Web itself. This worked great, but of course there were limitations initially based around the features allowed in the group, some of these have now been lifted and other components can now be easily surface within a group.

The difficulty here is that they are almost classed as out of bounds, as they are hosted underneath a separate web structure, with connections into the other services, so they don’t surface easily within SharePoint Online, whereas discussed previously really becomes the presentation layer. Social conversations were also missing which meant me as an end user had to still perform the same tasks as before, conversations outside, collaboration outside, but we did at least get direct email integration to facilitate some of it.

Groups works well and is most definitely an option to consider when building out collaboration spaces. It covers most of our user scenarios, but remember they are bit of an overkill for the one-to-one or one-to-few collaboration scenarios.

At the back end of last year, Microsoft made lots of noise about a new “groups” concept called “teams”. This in reality is version 2 of groups, as it combines the social, out of bound conversations into the groups construct along with other features that can be surfaced directly within the teams site.

The crooks of this is Skype for Business, which now becomes a core part of the overall experience. The user experience is to access the teams site, and then see everything in a single place, allowing for any number of actions to be completed such as video call right from the site using Skype for Business, or even accessing reporting using Power BI.

Teams works really well and does facilitate the majority of our user scenarios, however it is version 1 of the solution and would expect to see new features and maybe changes coming throughout 2017.

This most definitely a solution to look at in depth, allowing teams to use the core Skype feature set directly in context of the rest of the content has major benefits in collaboration.

Lastly Skype for business, though not a formal collaboration solution, is like most chat based solutions, in that it facilitates conversation, discussion and real-time type collaboration for assets that are shared. These conversations are often more beneficial than the actual arduous work to create the content in first place and become almost key to any collaboration effort.

With integration points using such things as bots and then events, it can become a more powerful solution, allowing capturing of the conversation enriching the overall content.

On its own it will never be the primary collaboration solution for any organization, but as we have seen with Microsoft Teams, when integrated it can become very powerful and enrich the whole user experience.

As you can see Office 365 offers some great features that all perform elements of collaboration, in their own way. The key for us as implementers is to find the best component or components and tie them together to create the best collaboration features needed. Microsoft will continue to innovate and offer better experiences with deeper integration, so we can also watch this space as it is shaped over the next year. Remember also that competition is also a big driver for the innovation, with many vendors now trying to build the same feature sets and components we should see better and better services being made available.