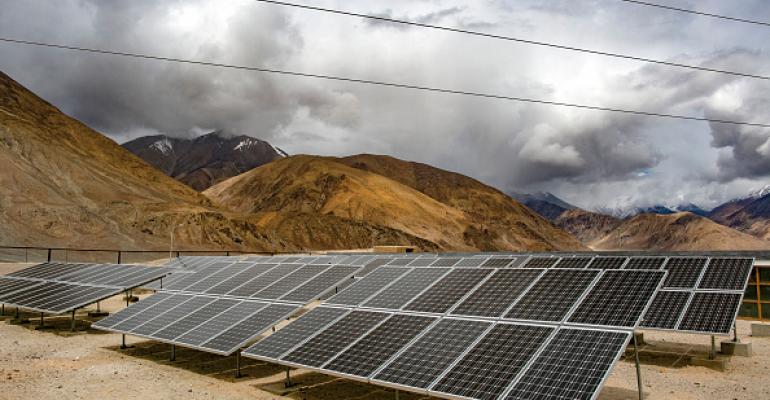 Las Vegas-based Switch will be the project’s “anchor” customer, the company said in a statement. Several of its data center clients, whose names were not disclosed, have signed up as well, and Capital Dynamics expects the data center company to apply the collective-buying approach it’s used with its customers to buy network services to buying renewable energy.

The project is called Gigawatt 1. Its planned generation capacity is 1,000MW, Adam Kramer, executive VP of strategy at Switch, said. That would make it the largest solar energy project in the US. Today, that title belongs to the 580MW Solar Star station in Kern County, California.

Over the recent years, users of data center colocation services have been increasingly interested in having those services powered by renewables, stimulating data center provider demand for solar and wind energy. Previously, only some of the hyper-scale cloud platform operators, such as Google and Apple, bought substantial amounts of renewables to power their own data centers, or, in many more cases, to offset their own data centers’ coal energy consumption.

Switch, which in 2015 committed publicly to powering all its operations with 100 percent renewable energy, has been more aggressive than other colocation providers in this regard. Over the course of 2015 and 2016 the company signed solar power purchase agreements for 180MW, enough to power its data center campuses in Las Vegas and outside of Reno, Nevada. In 2016, it signed an additional agreement for solar energy to power its new campus near Grand Rapids, Michigan.

There is sure to be more demand for energy produced by the Gigawatt 1 project in Nevada than the demand generated by Switch. A Tesla battery manufacturing plant is in the area, and Google bought a large piece of land there last year for a future data center campus.

There’s also an Apple data center campus nearby, but Apple already has a joint venture with NV Energy to build a 200MW solar plant to power the campus.

Google has been negotiating with state energy regulators to avoid getting into a contract with NV Energy. The company wants to buy energy from a different supplier, and renewables dominate its energy strategy. Google is also committed to powering all its operations with 100 percent renewable energy.

According to Switch, NV Energy’s renewable rates are too high – so high that in 2016 the data center provider took the utility and the Nevada Public Utilities Commission to court in 2016. Switch wanted to get out of a renewable energy contract with NV Energy it said was too expensive, but state regulations make it difficult for high-load customers to unplug from the NV Energy grid. Switch eventually reached an agreement with the state and was permitted to start buying electricity from other suppliers.

Gigawatt 1, Switch said, will sell solar energy at 4.9 cents per kilowatt-hour, which according to the data center provider is 50 percent lower than the rate NV Energy charges large industrial customers for renewables. That lower rate may just be along the lines of what Google is gunning for in Reno.