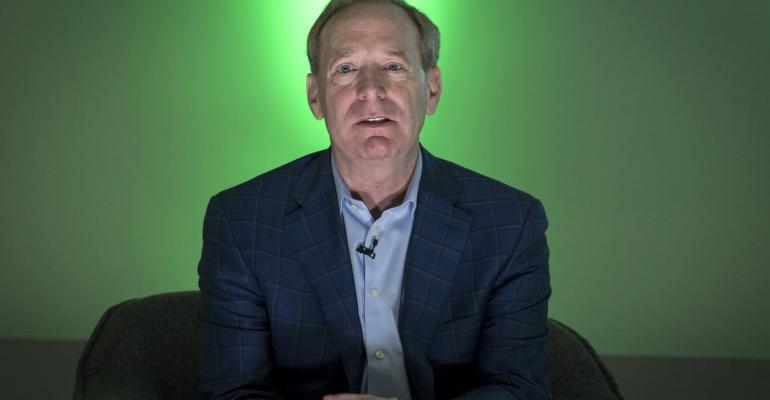 Microsoft Corp. is joining a climate advocacy group backed by big energy corporations and high-profile Republicans, an effort by the software giant to find middle ground on environmental issues that have polarized U.S. politics.

(Bloomberg) -- Microsoft Corp. is joining a climate advocacy group backed by big energy corporations and high-profile Republicans, an effort by the software giant to find middle ground on environmental issues that have polarized U.S. politics.

The Redmond, Washington-based company said it will back the Climate Leadership Council to push for a carbon tax, while accelerating a pledge to use more green energy in its data centers.

The Climate Leadership Council has pitched a tax on carbon emissions to the White House, selling the plan as an economic win that could drive job growth while yielding environmental benefits. The blueprint would also eliminate regulations aimed at cutting carbon dioxide emissions -- and much of the Environmental Protection Agency’s authority to regulate them. Companies that emit greenhouse gases also could win liability protection insulating them from litigation over the costs of climate change -- a potentially enticing sweetener as lawsuits mount.

Microsoft feels an “inclusive solution” is needed to make progress, given the divided political climate in the country, said Chief Environmental Officer Lucas Joppa. The move comes as 2020 presidential hopefuls, including Microsoft’s home-state governor Jay Inslee, focus on the issue and Democrats push the idea of a “Green New Deal.”

Tech companies, particularly those that sell cloud-computing services, are significant energy consumers because of the power, heating and cooling needing to run massive data centers full of servers. Last week, more than 6,000 Amazon employees signed an open letter asking the company to develop a comprehensive plan to address its carbon footprint. One specific concern raised by Amazon workers also applies to Microsoft: Both have large oil and gas companies as customers and partners.

Microsoft President Brad Smith said his company will still work with customers such as Exxon.

“Access to information technology is not going to determine how much oil is consumed on the planet,” he said. “We respect the fact that energy companies do need to provide the world with energy and that they are trying to improve efficiency, safety and and even environmental impact.”

Microsoft previously backed a Washington state initiative to implement a carbon tax, but that was rejected by voters in November. The company, which previously pledged to power data centers with 60 percent renewable energy by early in the 2020s, said it will now reach that goal this year and will surpass 70 percent by 2023.

A national carbon tax is unlikely to pass this year, but it’s important to raise awareness of the issue for the 2020 elections, Smith said.