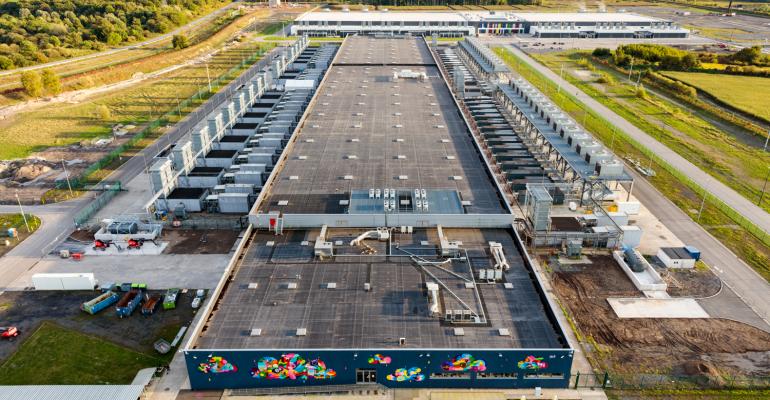 A large-scale battery plant at its Belgium data center will provide backup power and help balance the grid.

Google is hoping to kill two birds with one stone (and potentially a third one) in a pilot it’s about to launch at its data center campus in Belgium.

The Google data center team in St. Ghislain will use lithium-ion batteries instead of a diesel generator as power backup for 3MW of live, production computing load – a first for Google.

Mainly, they hope to demonstrate that a) batteries are a viable replacement for traditional data center backup generators, and b) a data center outfitted with a large-scale energy storage plant can help balance its local electrical grid, Maud Texier, Google’s carbon free energy lead, told us.

The third aim is much broader. Texier and her team see the pilot as an opportunity to start integrating batteries into Google's global infrastructure portfolio. They expect the project to send a signal to the market that batteries are now a mature, market-ready technology for large-capacity energy storage that can scale.

The company wants to demonstrate that data centers could “anchor carbon-free electric grids.” Data centers must store a lot of energy on-site for backup. Storing it in the form of diesel fuel and discharging it only when there’s a utility outage means the energy sits idle almost 100 percent of the time. A grid powered by renewables could use data centers connected to it to store excess renewable energy and discharge it at times when there isn’t enough renewable energy being generated.

This is a pursuit Google has had for some time (it published a paper outlining the scope of the problem in 2016), but started talking about publicly only last year, first at data center industry conferences, and later in announcements aimed at a wider audience. The company earlier this year committed to powering all its data centers with renewable energy around the clock by 2030.

It hired Texier to lead this push. She joined last May after five years at Tesla, where she led product management for industrial energy storage products.

Texier declined to name the vendor who would supply batteries for the Google data center pilot in Belgium, but said the project would use a product that already exists on the market, sold by “a pretty well-known entity,” one of the “leading energy storage integrators in the industry.”

Generators are Hard to Replace

Air-polluting backup generators have been a necessary evil in data centers – or any other type of critical infrastructure, such as hospitals – rarely used but unavoidable. The pilot in Belgium is an attempt to turn data center power backup from something that harms the climate to something that helps it improve.

Google estimates that the total generation capacity of all diesel-fueled data center backup generators deployed worldwide is more than 20 gigawatts, which could spell vast opportunities for renewable energy storage.

Google isn’t the only data center operator looking to part ways with diesel generators. There were multiple pilot projects exploring alternatives to generators at least as far back as 2019, including by one major colocation provider, according to analysts at the Uptime Institute.

Microsoft, one of Google’s two biggest rivals in the cloud computing market, has been trying to figure this out since at least 2012 and earlier this year committed to ending its “dependency on diesel fuel by 2030.” Also this year, Microsoft announced a successful test for powering a data center rack with a hydrogen-fueled automotive fuel cell, looking at the technology as one of the potential replacements for diesel generators.

There are two main reasons Google is launching its pilot now, Texier explained. First, battery technology has matured enough to meet the tech giant’s reliability, quality, and cost requirements. Second, the company recently made some breakthroughs in the way it manages data center electrical infrastructure, learning to better align the amount of backup power available with the amount of power the computing load requires at a given moment.

Typically, a data center is seen as an inflexible load, or a “single block” of power, she said. In other words, if the facility’s total load is 10MW, the conventional approach is to ensure there’s 10MW of backup power. Google has learned to not treat total load as an inflexible block and match backup capacity more tightly with the capacity required by applications that run in the facility and the duration for which it’s required.

On a typical day, the data center battery plant in Belgium will provide grid services to ELIA, operator of the local transmission system. The batteries will charge or discharge to absorb imbalances between generation and consumption on the grid automatically, responding to deviations from the nominal utility frequency, which in Europe is 50 Hz, and based on rules established by the grid operator, Texier said.

If there’s a utility outage, the batteries will stop providing grid services and switch to backup operations. The pilot system is replacing one of the generators on campus, so it will run in parallel with diesel generators if the site loses utility power.

There is a number of programs for participants in such grid-balancing schemes in Europe. The participants get paid for contributing energy when it’s needed, and that’s part of the reason Texier’s team expects the pilot to work economically.

An association of European data center providers earlier this year lobbied EU officials to formalize data center participation in grid balancing and establish government incentives, such as tax breaks, DCK reported. Their argument in favor of incentives was that the necessary energy storage would be too expensive otherwise.

“There’s no expectation of subsidies” that’s part of Google’s calculation, Texier said. They expect the revenue from selling energy to the grid to balance out the cost of the technology.

If the pilot hits its goals – and she accepts that it may require several iterations to get all the moving parts working together – it won’t be easy to scale the concept across Google’s massive global network of hyperscale data centers. The main hurdles would be varying energy-market regulations and rules for grid balancing in different parts of the world.

At a high level, however, the solution will always serve any grid’s fundamental needs, Texier said. Grid operators everywhere need energy reserves to balance their systems, which should theoretically work to eventually lower those barriers.