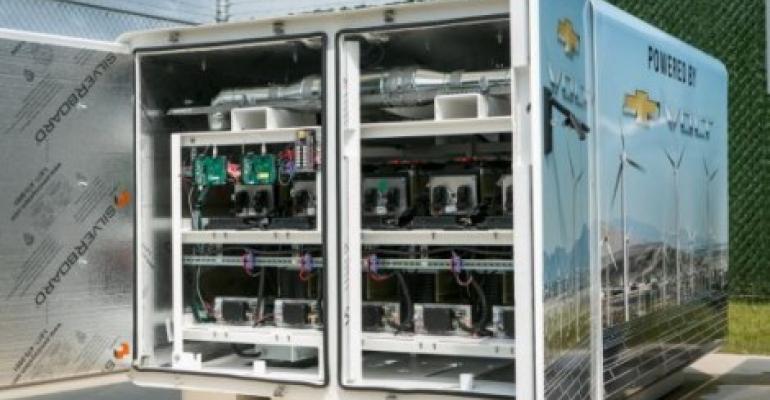 Batteries that power Chevrolet Volt electric cars are living a second life in Milford, Michigan. General Motors is powering an IT administration building with a renewable energy setup, backed by the former Volt batteries, post-vehicle.

The data center building is located on the proving grounds where the company performs validations for the Volt. A 74kW ground-mount solar array is coupled with two, 2kW wind turbines, which generate enough power for the office building and lighting for the adjacent parking lot. The setup results in net-zero energy use on an annual basis, generating enough energy to power the equivalent of 12 average households (100MWh), according to the company.

That renewable energy setup is backed by five of the Volt batteries lined up together and nestled right inside test racks. Those batteries can provide enough energy to keep things running for four hours in the event of a power outage.

“We were looking for an application that would make sense in the real world, and it was a natural match,” said Pablo Valencia, a senior manager at GM. “We came up with the setup based on two years of work at [U.S. Department of Energy's] Oak Ridge National Laboratory.”

Researchers from ORNL, GM, and ABB conducted several studies. The batteries are made to last as long as the vehicle and longer, with up to 80 percent of energy storage capacity remaining after life in a car. “It’s all about smart energy thinking over the entire lifecycle,” said Valencia.

One million lithium-ion batteries per year will become available from various automakers for the secondary market beginning in 2020, according to Imre Gyuk, manager of the Energy Storage Research Program at the DoE’s Office of Electricity Delivery and Energy Reliability.

This is an early real-world application for the used batteries, which were repurposed from early development models of the Chevy Volt. It presents one potential second use for the batteries.

The batteries last orders of magnitude longer than consumer cells, said Valencia. “Add a zero on for number of cycles,” he said. “Eventually they will get recycled for societal benefit. We look at the entire battery system from a repurposing and recycling standpoint.”

The company’s Milford data center, whose construction started in 2013, has achieved LEED Gold certification thanks to this innovative setup, as well as other green design choices.