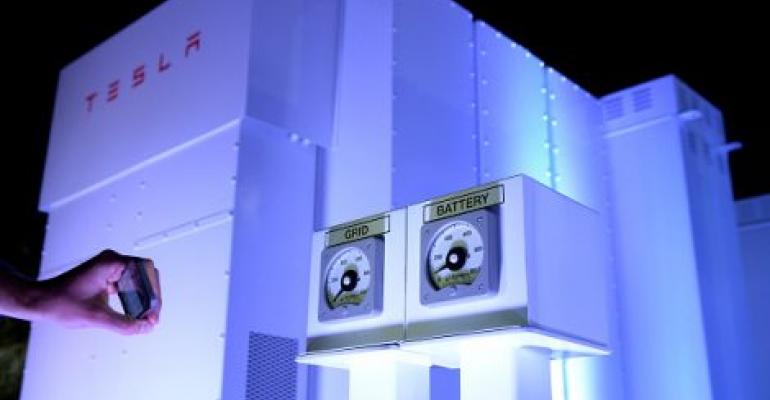 Battery tech is advancing quickly, thanks to Tesla, while other energy storage methods are being refined.

Gerrit De Vynck (Bloomberg) -- A Canadian firm is hoping to cash in on the burgeoning market for electricity storage -- no matter which technology breaks out first.

NRStor Inc. is positioning itself to be the go-to distributor, developer and operator of lithium-ion batteries, magnetically-levitated flywheels and other technologies seeking to solve the age-old question of how to save electricity for later use. The Toronto-based company is the only distributor of Tesla’s Powerwall residential battery in Canada and is working to turn a giant salt cavern into a compressed air energy storage system.

Battery technology is advancing swiftly, largely driven by Elon Musk’s Tesla Inc. At the same time, other methods are being refined that can be used to store energy for even longer periods of time. The global market could expand to around $20 billion by 2024, from around $600 million in 2015, according to U.S. firm Navigant Research.

“This thing can go really quick,” said NRStor Chief Executive Officer Annette Verschuren. Verschuren previously ran Home Depot Inc.’s business in Canada and met U.S. President Donald Trump during a meeting with female executives in February. “These technology companies would prefer to work with us, because we develop the market, we get the regulations right, we do the assessments, we do the connections, we build it, we operate it.”

Founded in 2012 with C$10 million ($7.5 million) in seed capital, Verschuren estimates NRStor could have an enterprise value of about C$500 million in abound six years and may eventually go public. She foresees a future where residential homes, businesses and manufacturers all tap energy storage technology in different ways to save costs. She declined to provide current revenue figures.

The company started operating the first  flywheel project in Canada in Minto, Ontario, about 150 kilometers (93 miles) west of Toronto, in 2014. The giant spinning wheels, which rest on levitating magnets to reduce friction, store kinetic energy that can be used to power a generator.

Another project NRStor is spearheading is pumping a salt cavern in Goderich, Ontario full of compressed air. It’s a technique that’s been used to store natural gas for years as salt naturally seals any cracks that form, keeping whatever’s inside from escaping. NRStor also captures the heat from the compressed air using a substance developed by another Canadian firm, Hydrostor Inc., an innovation NRStor says is a world’s first for a project that big.

“This is what allows us to make our technology fuel-free,” said Katherine Peretick, NRStor’s lead engineer. The few other compressed-air storage facilities in operation need to burn natural gas to heat the air back up. The salt cavern will be able to store enough electricity to power around 1,000 homes and was commissioned by Ontario’s government-owned electrical system operator.

Annual investment in compressed air alone will hit $5 billion annually by 2024, according to Navigant. Much of that demand will come from abroad and Verschuren said she’s already fielding interest from Europe and the Caribbean for NRStor’s work. The big prize will be the U.S. though, with the North American market for energy storage forecast to grow to $150 billion, Verschuren said.

Trump’s skepticism of climate change and sustainable energy projects doesn’t worry her, Verschuren said. “The horses are out of the barn. You cannot stop California, New York, New England,” she said, referring to the myriad state regulations and subsidies for clean energy. “I know he’s stripping the EPA but I think it’s going to give a lot more power to the states, and that’s where things get done.”

She told Trump as much when she met with him as part of Canadian Prime Minister Justin Trudeau’s visit to the White House. It also gave her the chance to impress on the president her view that more needs to be done to remove barriers for women to get into positions of power in business and politics, Verschuren said.

“My argument with him was, ‘look, let’s drive our economies through the productivity of women, the participation of more women,”’ she said. Verschuren encouraged Trump to ask male CEOs what they were doing to get rid of the glass ceiling. “I really believe it could change, even from him.”