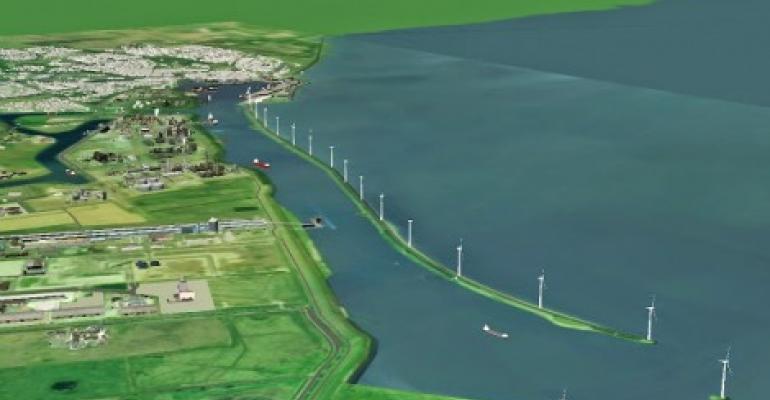 For Google, huge wind PPAs are nothing new; Amazon says it will get off coal, but doesn't say how

It's been a big week for carbon neutral data center energy, both Google and Amazon taking big steps to power their data centers with clean power.

Google announced that its Eemshaven, Netherlands, data center will be powered by 100 percent renewable energy when it comes online, its first data center to do so on day one. Amazon quietly committed to going 100 percent renewable. Its cloud business Amazon Web Services has been a frequent target of criticism by Greenpeace, which has accused it of using too much coal power and not being transparent about the fuel mix that powers its cloud.

Google signed a power purchase agreement for a 63 megawatt wind farm that will power its Netherlands data center planned for 2016. The new deal is a 10-year agreement for the entire output of a new 18-turbine onshore-offshore wind farm being built by Eneco at Delfzijl. The wind farm will be 20 kilometers away from the data center, close enough to see on a clear day.

The PPA means Google has now signed agreements for over 1 gigawatt of wind across its footprint. The company announced it hit 1 gigawatt of total renewable energy on Earth Day.

Such PPAs are a common instrument Google uses to get carbon neutral data center energy. A long-term PPA finances the construction project, which then generates energy Google sells to the local grid. The company keeps the renewable energy credits associated with that energy and applies them to offset the carbon associated with grid electricity it buys for its data centers.

The new Dutch data center is expected to cost €600 million (about $750 million).

When the project was first confirmed, spokesman Mark Jansen told Reuters the site was chosen because of stable Dutch energy supply. A big reason for building the data center at Eemshaven was the choice of renewable energy options in the area.

“By entering into long-term agreements like this one with wind farm developers, we’ve been able to increase the amount of renewable energy we consume while helping enable the construction of new renewable energy facilities,” wrote Francois Sterin, director of Google's global infrastructure team.

This is the third PPA Google has signed in Europe in the last 18 months. The other two were with wind farm developers in Sweden to power the data center in Hamina, Finland. A deal in 2013 was followed by the company buying the total output of four new wind farms in January. Google’s Hamina data center also uses seawater for cooling. Investment there has topped $1 billion.

"Google has been fairly consistent [in terms of signing PPAs]," said Gary Cook, senior analyst at Greenpeace. "They’ve been signing long term contracts which is bankable for renewable energy players. Microsoft is doing the same. We’d really like to see Amazon follow suit."

Amazon has been Greenpeace's target of choice as laggard in renewable energy initiatives. However, the company quietly announced that it was committing to 100 percent renewable across its global data center footprint.

“Amazon Web Services’ new commitment to power its operations with 100 percent renewable energy represents a potential breakthrough toward building a green Internet," said Cook. However, Cook believes Amazon needs to be more transparent about how it hopes to achieve this.

“Amazon’s customers will need more information to be sure that AWS means business about renewable energy," he added. "AWS should offer a plan for how it will implement its ambitious new commitment across its footprint. Apple, Facebook, and Google, three of Amazon’s peers and rivals, all have laid out road maps that explain how they intend to achieve their goals of procuring 100% renewable energy.”

This roadmap is important in evaluating the true impact. A long-term PPA with a wind farm has a positive impact on the renewable energy industry, while some other ways to get to carbon neutrality -- such as renewable energy credits credits -- aren't as impactful.

We reached out to Amazon for comment, but a company spokesperson said the company didn't have more information to offer, but that its sustainable energy commitment statement may be updated periodically. So far, the company has made the general commitment and is emphasizing hardware, software, and operational efficiencies it achieves at scale. AWS said it uses rack-optimized systems that use less than one-eighth the energy of blade enclosures commonly used in corporate data centers.

The three regions the company says are currently carbon neutral are US West (Oregon), EU (Frankfurt), and AWS GovCloud (Northwest).

Another giant that has made a lot of progress in clean data center energy is Apple, which hit 100 percent renewable energy in its data centers in 2013, and has since dramatically increased efforts. It has resulted in a very positive response from customers. "It’s worked quite well for Apple," Cook said.

Apple and Google recently lobbied Duke Energy for renewable energy in North Carolina, resulting in a $500 million investment by the utility. This was a big turnaround for Apple, a company Greenpeace used to call out as a company that operates a cloud that's 'dirty and dangerous' in 2011.

"Apple showed the industry that it’s better to get out in front of this," said Cook. "Groups like us are looking at them. Customers have high expectations."

This is Google’s first data center company-owned and company-built in the area, but it has operated a data center in Eemshaven owned by TCN for over six years. The company has three other large European data centers: in Ireland, Finland, and Belgium.

The Eemshaven facility will span 44 hectares. Employment in the area will get a boost, with Google expected to create 150 jobs.

Google isn’t the only tech giant attracted to the Netherlands’ power profile. Apple is said to be considering a data center in the area for similar reasons.

Google has made several bulk purchases of wind power in the U.S. as well. It mostly deals with wind farm developers, but in 2012 it began working with utilities on wind power for the first time, using its sway to convince them to invest in renewables. The announcement that it had invested in 1GW of renewable energy generation capacity came after a blockbuster deal with MidAmerican Energy.