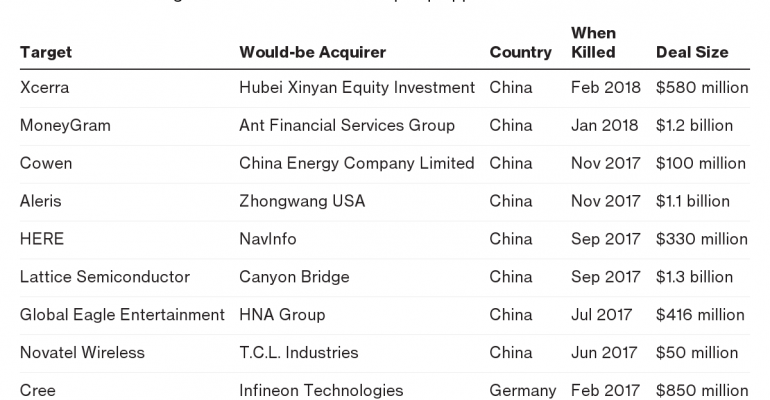 Trump's Message With Broadcom Block: U.S. Tech Not for Sale

President Donald Trump sent a clear signal to overseas investors: Any deal that could give China an edge in critical technology will be swatted down in the name of national security.

(Bloomberg) --With his swift rejection of Broadcom Ltd.’s hostile takeover of Qualcomm Inc., President Donald Trump sent a clear signal to overseas investors: Any deal that could give China an edge in critical technology will be swatted down in the name of national security.

Although Broadcom is based in Singapore, China loomed large over the U.S. government’s fears about a foreign takeover of chipmaker Qualcomm. That’s because Qualcomm is locked in a head-to-head race with China’s Huawei Technologies Co. over which company will dominate the development of next-generation wireless technology.

"This decision hangs a huge ‘not-for-sale’ sign on just about every American semiconductor firm," said Scott Kennedy, who studies China’s economic policy at the Center for Strategic & International Studies in Washington. "A Chinese entity doesn’t need to be anywhere near a transaction now in semiconductors for the deal to be nixed."

The president’s order on Monday blocking Broadcom’s $117 billion bid for Qualcomm is the latest sign of Trump’s tough stance on foreign takeovers of U.S. technology and is part of a broader move to contain China on trade. The Trump administration is considering clamping down on Chinese investments in the U.S. and imposing tariffs on a broad range of its imports to punish Beijing for its alleged theft of intellectual property.

Only five takeovers of American firms have been blocked by U.S. presidents on national security grounds since 1990. Of those, Barack Obama blocked two deals during his two terms. Trump has blocked two in six months.

"There is credible evidence that leads me to believe that Broadcom," by acquiring Qualcomm, "might take action that threatens to impair the national security of the United States," Trump said in the order released Monday evening in Washington.

Broadcom said in a statement it was reviewing the order and that it "strongly disagrees that its proposed acquisition of Qualcomm raises any national security concerns."

Trump isn’t the only hurdle to getting deals done. Lawmakers in Washington are moving forward with legislation that would expand the universe of overseas investments that require national security approval from the Committee on Foreign Investment in the U.S. The Trump administration has endorsed the bill, which Senator John Cornyn, a Texas Republican, proposed with China in mind.

"There’s going to be a wake-up call once this passes," said Timothy Adams, president of the Washington-based Institute of International Finance. "It’s a completely different regime in the U.S."

China has been the leading source of investments reviewed by CFIUS, which is chaired by Treasury Secretary Steven Mnuchin, though its members include the heads of more than half a dozen agencies. A broadening of the committee’s mandate will raise protective barriers by expanding its authority to reject Chinese investments.

Trump’s order came as Broadcom was in the midst of moving its headquarters from Singapore to the U.S. Broadcom announced the move in November after its Chief Executive Office Hock Tan met with Trump at the White House. After the meeting, CFIUS approved Broadcom’s takeover of Brocade Communications Systems, conditioned on the headquarters move, according to Broadcom.

On Monday, Tan went to the Pentagon to meet with CFIUS officials in a bid to address their Qualcomm concerns. Tan argued that combining Broadcom and Qualcomm would further U.S. interests by advancing the development of the next generation of wireless technology known as 5G, according to a person familiar with the meeting. Hours later, Trump issued his order.

What’s unique about the Qualcomm deal is that the buyer wasn’t Chinese. Still, China was foremost in CFIUS’s mind, according to a March 5 letter from the panel to the companies. The U.S. feared that Broadcom would curtail investment in research and development, undermining Qualcomm’s position in developing 5G and creating an opportunity for China’s Huawei Technologies Co. Underscoring the risks it saw in the deal, CFIUS intervened in the middle of a proxy fight rather than waiting for a formal purchase agreement.

"China would likely compete robustly to fill any void left by Qualcomm as a result of this hostile takeover," CFIUS said in the letter. "Given well-known U.S. national security concerns about Huawei and other Chinese telecommunications companies, a shift to Chinese dominance in 5G would have substantial negative national security consequences for the United States."

Kennedy at CSIS said that view represents "a huge shift" in how CFIUS reviews transactions.

"Concern has expanded from existing technologies with national security implications potentially falling into rivals’ hands to ensuring American companies continue to invest in R&D to maintain their technological edge," he said.