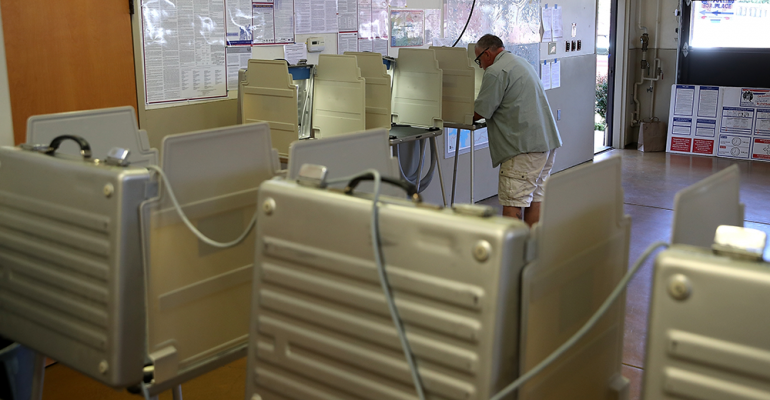 Justin Sullivan/Getty Images
A voter fills out a ballot inside a polling station in San Anselmo, Calif., this month.
Security>Endpoint Protection

“We have uncovered attacks specifically targeting organizations that are fundamental to democracy,” Tom Burt, Microsoft’s vice president for customer security & trust, wrote. “Democracy-focused organizations in the United States should be particularly concerned.”

(Bloomberg) -- State-backed hackers have attempted to infiltrate targets related to U.S. elections more than 700 times in the past year, furthering concerns about potential meddling in upcoming races, according to a blog posted Wednesday by Microsoft Corp.

The hackers responsible are mostly from Russia and North Korea, said Tom Burt, Microsoft’s vice president for customer security & trust, in an interview.

The company has counted nearly 10,000 hacks globally stemming from state-sponsored attacks in the past year. Of those, 781 have been to democracy-focused organizations, particularly non-governmental organizations and think tanks, and nearly all of those attacks, 95 %, are against U.S.-based organizations.

“We have uncovered attacks specifically targeting organizations that are fundamental to democracy,” Burt wrote. “Democracy-focused organizations in the United States should be particularly concerned.”

The attacks on democratic institutions are a likely precursor to hacking attempts on campaigns and election systems ahead of the 2020 presidential elections, according to the blog. However, the North Korea-based hackers may be conducting espionage on issues of special interest like nuclear disarmament, rather than seeking to hack elections, Burt said in the interview.

While many of the attacks on Microsoft customers weren’t related to elections, the company’s data “demonstrates the significant extent to which nation-states continue to rely on cyberattacks as a tool to gain intelligence, influence geopolitics and achieve other objectives," Burt wrote.

The post comes as presidential campaigns heat up amid concerns that the 2020 election will face some of the same meddling, or worse, that occurred in the last election, when Russia waged a hacking and social media effort to help Donald Trump’s campaign.

The Trump administration has issued warnings that Russia, Iran and China are seeking to manipulate public opinion ahead of the 2020 election. Director of National Intelligence Dan Coats warned early this year that adversaries probably view 2020 as an “opportunity to advance their interests” and may seek to hack election systems. Last week, seven senior U.S. national security officials delivered classified briefings to members of Congress about their efforts to secure 2020.

So far at least, there have been no successful breaches of campaigns or election systems related to the 2020 election disclosed by Microsoft or the Trump administration. Microsoft says it stopped attacks against U.S. think-tanks and leading candidates for the U.S. Senate last year, though it didn’t identify the candidates.

The more recent hacking attempts disclosed by Microsoft “reflect a pattern that we also observed in the early stages of some previous elections,” Burt said in the blog post. “In this pattern, a spike in attacks on NGOs and think tanks that work closely with candidates and political parties, or work on issues central to their campaigns, serve as a precursor to direct attacks on campaigns and election systems themselves.”

Microsoft is one of many companies offering its services to candidates, election officials and non-governmental organizations in the wake of the Russian attacks on the last presidential election. Last August, Microsoft unveiled AccountGuard, a free threat notification service, as part of a broader program called Defending Democracy, which analyzes vast amounts of emails to protect users from phishing attacks and tampering.

The company is on the cusp of a pilot project with Columbia University to test its ElectionGuard system in the 2020 elections, a program that would allow voters to track their ballots from the voting booths to tabulation systems on personal devices.

Microsoft Offers Election Software That Will Flag Hack Attempts
May 06, 2019

First Line of Defense in U.S. Elections Has Critical Weaknesses
May 29, 2018