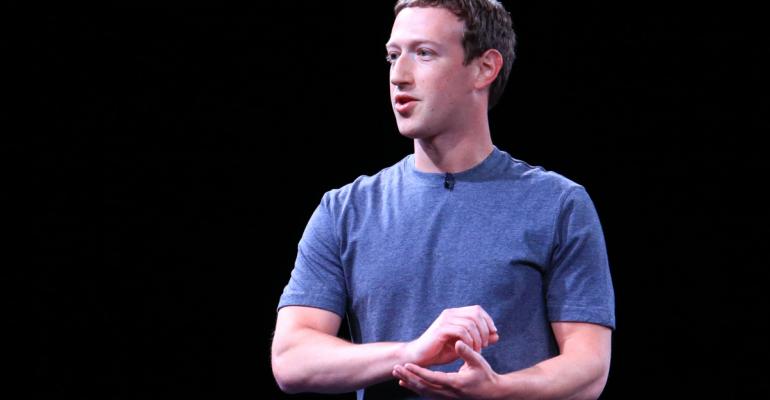 Facebook CEO Vows to Alert All Whose Data May've Been Exposed

Mark Zuckerberg, breaking a media silence on the latest imbroglio to engulf the social media company, vowed to inform each of his two billion-plus users if there’s a chance their personal data was compromised.

(Bloomberg) --Facebook Inc.’s Mark Zuckerberg, breaking a media silence on the latest consumer imbroglio to engulf the social media company, vowed to inform each of his two billion-plus users if there’s a chance their personal data was compromised.

In an interview with CNN, the billionaire chief executive officer said he would appear before Congress if necessary, to testify on revelations that a researcher harvested data on 50 million and sold it on surreptitiously to consultancy Cambridge Analytica. That bombshell has since wiped $45 billion off Facebook’s value, drawn regulatory scrutiny on two continents and ignited a #deletefacebook campaign.

Zuckerberg finally spoke out Wednesday -- after staying mum for days -- in interviews with several media outlets. It was more important to make sure that whatever he voiced was 100-percent accurate, he told the New York Times.

Facebook will “tell everyone whose data was affected by one of these rogue apps,” Zuckerberg said in an interview on CNN. The number of apps Facebook will attempt to ferret out could be in the thousands, he told the newspaper separately. “We’re going to be conservative on that and try to tell anyone whose data may have been affected, even if we don’t know for certain that they were.”

That audit process will take months and cost “many millions of dollars,” Zuckerberg told the blog Recode. “The conversation we were having internally on this is: Are there enough people who are trained auditors in the world to do the number of audits that we’re going to need quickly?”

Zuckerberg wrote a blog post earlier outlining steps to make sure such a leak doesn’t happen again. And he said Facebook is improving markedly in handling foreign interference in elections, particularly as the 2018 U.S. mid-terms approach. But some remain skeptical the company’s doing enough, and it’s uncertain how much momentum #deletefacebook has gained, though Zuckerberg told the Times he hadn’t “seen a meaningful number of people act on that.”

Then there’s American lawmakers. One of the central questions that’s arisen since the crisis emerged is whether Zuckerberg would be willing to lay out for Congress exactly what happened.

“I’m happy to if it’s the right thing to do,” Zuckerberg said. “We just want to make sure that we send whoever is best informed.”

The company doesn’t have the ability yet to answer one of lawmakers’ key questions: whether Cambridge Analytica still has access to the data. “We haven’t done our full investigation and audit yet so I can’t say definitively that they actually have data,” Zuckerberg told the New York Times. “I’ve just read all the same reports that you have.”