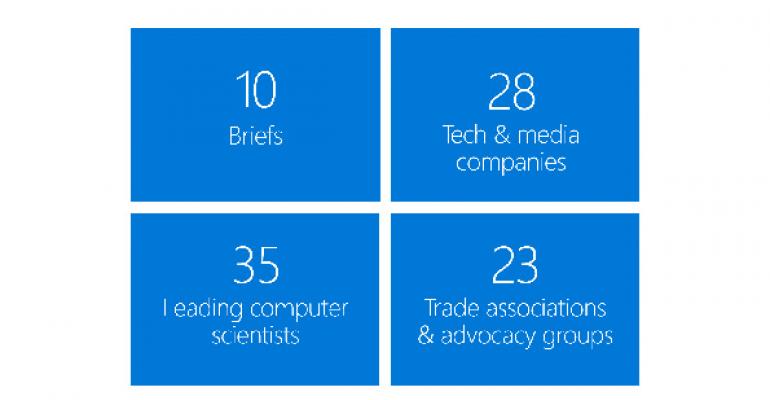 Lots of support for the law

Microsoft's efforts to prevent the US government from illegally seizing evidence held in its email servers in Ireland has garnered an incredible level of support from within the tech community and beyond. On Monday, the software giant announced that it has filed 10 legal briefs in the case which are signed by 28 leading technology and media companies, 35 leading computer scientists, and 23 trade associations and advocacy organizations.

"We believe that when one government wants to obtain email that is stored in another country, it needs to do so in a manner that respects existing domestic and international laws," Microsoft general counsel Brad Smith writes in a blog post announcing the filings. "In contrast, the US Government's unilateral use of a search warrant to reach email in another country puts both fundamental privacy rights and cordial international relations at risk.  And as today's briefs demonstrate, the impacts of this step are far-reaching."

The message Microsoft is sending is clear, and simply summarized by the Software Alliance, which says that "the US government has no legal authority to force a US company to turn over data stored on overseas servers." So while it appears to be about a very narrow legal question, as Microsoft puts it, it really represents "a broad policy issue that is fundamental to the future of global technology."

This week's briefs were jointly filed by a wide array of companies, including tech giants like Amazon, Apple, Cisco, eBay, HP and Salesforce, wireless carriers AT&T and Verizon, two of the country's largest business organizations, the US Chamber of Commerce and the National Association of Manufacturer, five civil liberties organizations, 17 major and diverse news and media companies, including ABC, CNN, Forbes, the New York Times, and the Washington Post, 35 leading computer science professors from 20 US universities, and various European civil liberties groups. The full list of signatories is available in a legal filing.

One year into the case, and it has grown from a simple refusal to fulfill what Microsoft thought was an inappropriate data request into one of the most hotly-debated issues in the tech community. In standing up to the US government, Microsoft isn't just making a point, it's protecting the future of electronic business for an entire industry.

"It doesn’t need to be this way," Mr. Smith added. "The US has well-established treaties with countries around the world that allow them to seek the information they need while ensuring that citizens of other countries retain the privacy protections offered by their own laws and Courts. And there's ample opportunity for work to modernize these agreements further."