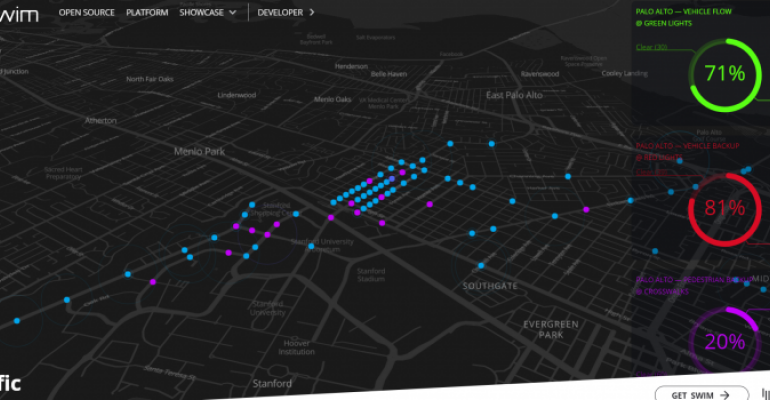 Taking the "open core" route, the startup wants the open source community to take its platform in more directions than it's been able to so far.

There’s more open source software headed for edge computing deployments. Swim, the four-year-old San Jose-based startup whose platform for real-time analytics at the edge has been running as a proprietary product licensed to specific customers, this week announced an open source version of the platform licensed under the Apache 2.0 license.

The Open Source Edge Intelligence Platform, as the project is now called, is a Java Virtual Machine extension that’s used in place of a traditional stack to analyse streaming data on the fly. The software works through mesh-connected “digital twins” that utilize machine learning to predict changes in the data being created. It’s used by enterprises, equipment manufacturers, and Internet of Things businesses to locally process and analyze large amounts of streaming data.

At about 2MB, the software can either be installed directly on IoT devices or sensors, on small edge servers, or in the cloud.

“In the Swim world, instead of having a data scientist build a model ... the data builds the model automatically,” Simon Crosby, Swim’s co-founder and CTO, told Data Center Knowledge. “The model builds a graph automatically, and then these little digital twins in the real world can learn on their own data and analyze it to predict the future.”

As an example of Swim’s capabilities, Crosby cited a deployment that watches over the flow of traffic in Palo Alto.

“These little digital twins become effectively a model of every intersection in the city, and the intersections collaborate to predict the future flow of traffic about two to five minutes ahead of time,” he said. “They stream those results continually to an API, which we present to customers by a cloud interface, so an organization which is looking to route its vehicles through a city can simply use this interface to identify the best route for the vehicle, which minimizes transit times.”

The data generated and managed by such an operation is pretty impressive. According to Crosby, the Palo Alto monitoring deployment generates about 4TB daily. Another similar operation in Las Vegas generates 100TB per day. “Many times bigger than Twitter,” he noted.

The open source version of Swim includes the digital twin platform and runtime for building and running apps, as well as a user interface framework, a software development kit, and a client for building streaming visualizations and embedding streaming UI components into existing apps. It also includes streaming APIs for integrating data streams and analytical insights with existing UIs or external applications.

“Everything a developer would need to build and deploy powerful edge applications that build models on the fly from data and then compute and stream their insights in real-time is there to build massive distributed applications,” Crosby said.

To monetize a product that it’s now giving away, Swim is taking the “open core” route while marketing a proprietary enterprise edition that adds security, manageability, persistence, and scalability features to the core Swim platform.

By open sourcing the core technology, Swim is hoping to attract developers who will take the platform in new directions. To this end, the company is already working to build and nurture a community of open source developers and users through it’s website.

Crosby is known in the world of open source software for data centers for his work as co-founder and CTO of XenSource, the company that was the primary driving force behind the open source Xen hypervisor, acquired by Citrix Systems in 2007. After the acquisition, he served as CTO of Citrix's data center and cloud division, before co-founding a cybersecurity company called Bromium, which he still advises. He joined Swim, also known as Swim.ai, last year, when the startup came out of stealth.

“One of the areas in which we really want the [open source] community to work with us is to continue to extend the analytical capabilities which are part of Swim,” Crosby said. “Today, Swim is good at stream analysis and has good enough machine learning capabilities for the use cases to which we have put it thus far. But we’re very keen to see the community come around us to add the additional data science and machine learning capabilities you’d need for other applications.

“We really want to see what the community can do with this and where Swim can go and make a big difference. Swim [the company] will get pulled along in some of those directions and won’t in others. We’re totally cool with that.”

The company is also cool with the fact that the “permissive” Apache open source license it's using means developers can release any applications they build under proprietary licenses if they wish and become competitors.

“We want a rich community around Swim,” Crosby said. “That’s the whole reason for going Apache 2.0. We didn’t want to encumber the license of Swim in any way. There’s nothing that would prohibit you from taking Swim and going off and building some awesome SaaS application with the references from AI.”

Swim can be downloaded from community portal that includes documentation and support resources to help developers start building streaming applications.