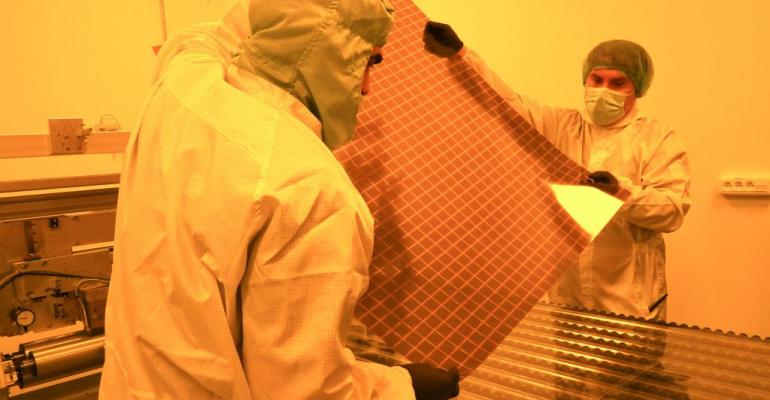 Startup Edge Centres aims to close the digital divide between coastal and inland areas with a new kind of data center.

Jonathan Eaves thought there was at least a 50-percent chance he’d be heckled before he got up to speak to an audience of data center engineers at a conference in August. Earlier this year he’d launched a whole new business to design and build from scratch a network of solar-powered edge data centers in Australia. He’s a long-time data center engineer himself, but he’d never designed anything quite like that before.

The founder and CEO of Grafton, Australia-based Edge Centres came to Orlando to share details of the design with fellow engineers at Data Center World for the first time. Naturally, he was nervous.

“I did it and I got asked the right questions,” Eaves told DCK in an interview after his presentation. “There was a lot of nodding. When you speak at an event, it’s the nodding that you look for, because somebody recognizes that comment and agrees.”

As the digital infrastructure industry embarks on the next massive phase of buildout – the expansion of computing and connectivity to the edge – Eaves wants to show that there is a way to build solar-powered edge computing infrastructure, and what that design may look like. While the technology to make this work for hyperscale data centers is not quite there, all the parts needed to make it possible at 40-foot shipping container scale are already on the market, he has found.

Eaves said he came to Data Center World now – the last time he was in Florida was almost two decades ago, when he was a marine engineer working on the Disney Magic cruise ship – to find like-minded engineers to collaborate with and fine-tune the design.

“This isn’t world domination for me,” he said. “This is creating something that allows us to establish a framework that works for solar edge.”

Eaves’ initial goal (and the primary business opportunity he’s after) is to expand internet connectivity in Australia, which is “extremely coastal.” Most of the network infrastructure is concentrated along the edges of the continent, and connectivity costs increase at higher and higher multiples the further inland you go.

Edge Centres is building data centers and fiber infrastructure that will form a “whole new spine through Australia,” he said. “That will allow me to bridge that digital divide.”

The spine, whose construction is underway right now, will run north to south, cutting through inland parts of the eastern states: Victoria, New South Wales, and Queensland. If you draw a line from Cairns in the north to Melbourne in the south, the spine for the most part will follow that line, save for a detour toward the coast, to Brisbane, and back inland.

There’s a lot of hyperscale data center construction taking place in Australia. After years of building out infrastructure in Sydney, cloud providers like AWS, Google Cloud, Azure, and Oracle Cloud are now busy adding availability regions in the Melbourne market. While there’s little incentive for companies of that scale to build massive data centers in the country’s inland areas, they could in the future find it valuable to extend their platforms to inland facilities built by someone else. As Eaves put it, those companies may be considered edge data center customers now in the US, but in Australia they will only become edge customers in a few years. His current focus is on Australian businesses’ more immediate connectivity needs, not building edge sites for hyperscalers.

“In Australia, the edge, initially, is really a regional area, and it needs comms before it can support any of that,” he said.

Edge Centers’ future backbone, he envisions, will enable ISPs to bring their services to inland regions, charge the same prices they charge in coastal cities, and stimulate growth of new business ecosystems.

“By being on the periphery, [the edge] being regional locations, I can now be that short hop in an area that didn’t have that sort of infrastructure,” Eaves said.

Solar, Backed by Utility and Generators

Eight of the 11 legs of the fiber network planned for this year are complete, Eaves said. Edge Centres plans to build another seven next year. It will all add up to 1,600 km of fiber, along which the company is building 16 solar-powered edge data center facilities.

Unlike hyperscalers, which aren’t only technologically constrained but also have a hard time sourcing utility-scale renewable energy local to their computing facilities, Edge Centres is powering each of its small data centers with its own onsite solar panels. (You need an area of about an acre to install 150kW of solar generation capacity, he said.)

The IT load gets its power from batteries, which can be charged either by the solar panels or by the utility grid, with generators for backup when all else fails. There are two redundant feeds powering the IT load (A and B), and each feed has its own set of all four power sources: battery, solar, utility, gensets.

Cooled with direct-expansion cooling using outside air, each container provides a total of 100kW of IT load (4kW per cabinet power density, according to Edge Centers’ website) and costs about $1 million all-in, with the one variable being the amount of fiber it needs to connect to the nearest internet exchange, Eaves said. That variable can make a difference in cost of up to a quarter of a million dollars.

The Hunt for the Best Battery

One of the biggest and most consequential design decisions for Eaves’ edge data centers was selecting the type of batteries to use. The right battery technology should hit a balance of energy density, discharge capacity, longevity, scalability, and cost, and he and his team went through multiple options before settling – for now – on a lithium iron phosphate (LiFePo) battery.

One other battery that fit their needs, but not their budget, was built using recycled Nissan Leaf lithium-ion batteries. Another, which they particularly liked for its scalability and longevity, was a vanadium flow (or vanadium redox) battery. Alas, the former came at $400 per kW and the latter at $500 per kW, Eaves said, leading them to the LiFePo product, which cost $150 per kW. “That’s the buy price,” he said.

While acknowledging that better solutions will come along in the future, Eaves said he believes that he has “the best battery that’s available on the market” for his purposes.

One big unknown about the LiFePo batteries is whether the constant charging and discharging they undergo in his data centers shortens their lifespan. That’s because no-one has used them in this way before, he said. “Yes, I am aware of it. Is it a business risk? Not now, because I’m seeing them cycle, they’re fine.” He expects to have a better idea of how his application affects the batteries’ longevity in two or three years.

Perhaps the only thing he’s learned more about than batteries in the months spent working on the design is behavior of the clouds. “I watch the clouds like you watch network traffic,” he told his Data Center World audience. “I monitor them every second.”

Using APIs, the system automatically decides when to charge batteries using solar and when to top them up from the utility feed. It relies on a high-end weather service for next-day cloud cover forecasts to make those decisions. First, at 6 pm every day, it checks whether the batteries are 100 percent charged. If they’re not, it checks what the clouds are going to be like the next day. If the cloud cover is going to be less than 30 percent, it does nothing. That means there will be enough solar energy to keep the batteries charged through the day. If the cover is more than 70 percent, it tops the batteries up using grid power.

“At midnight every night my battery should be full, one way or the other,” Eaves said.

It only takes one hour to charge batteries at a single Edge Centres site enough for a 24-hour run from the grid. Once fully charged, the site switches back to battery power. “So, [in] the worst case, you’re using one hour’s worth of electricity per day, if you have terrible weather.”

It’s startling how quickly the design came together. Eaves said he launched the business in February and by April the first Edge Centres location, in Grafton, was up and running.

He says it’s part his engineer’s skill, part availability of all the components off the shelf, and part luck. He was willing to fail and “luckily, my engineer was good enough that the panel design worked, the brackets and the frames that hold the panels worked,” and so on.

“The equipment’s there if you know what to look for,” Eaves said.

There’s been a lot of progress in solar energy technology. The all-important inverters, which not only convert DC to AC and back but act as brains that orchestrate the system, have gotten very advanced. They all come with an app, they have web interfaces, they have APIs. He also found vendors that make them eager to take feedback from customers and change their systems.

While Edge Centres has managed to come up with a viable design using off-the-shelf components available today, future iterations of the design will be different, as new, better equipment hits the market at the right price points, and as he and his colleagues think of better ways to optimize the design. “What we did on the first day is different today, what we’re doing today will be different in November,” he said, describing the whole effort as an “investigation.”

There will be better inverters, better batteries, and better cooling configurations. “But to be able to successfully use what is off the shelf right now in a format that’s safe and good for critical equipment was the leap we made that gave us that push up over all of our competitors.”

It may be a while before the likes of Google, Microsoft, or Facebook figure out a way to power hyperscale data centers with clean energy around the clock, but at the scale of container-based edge data centers, “your limitations to now having connectivity that’s powered off solar are sorted,” Eaves said.

Google Cloud and Ericsson to Build 5G and Edge Cloud for Telcos and Enterprises
Jun 30, 2021