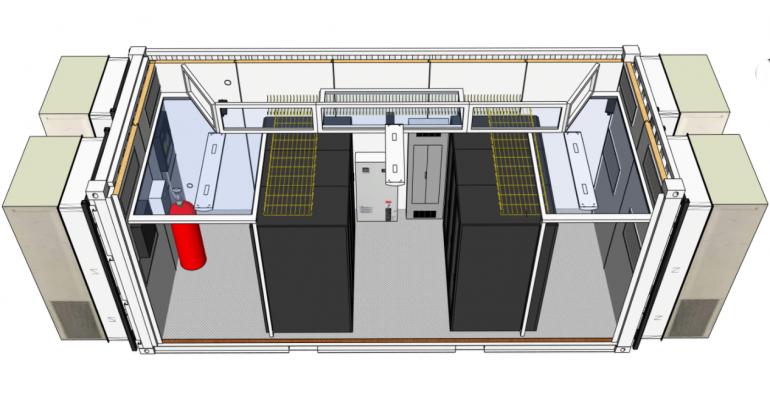 EdgeMicro
Rendering of the EdgeMicro container prototype
Next Gen>Edge Computing

EdgeMicro Plots to Disrupt Edge Colocation, 48kW at a Time

Critical Thinking is a weekly column on innovation in data center infrastructure design and management. More about the column and the author here.

EdgeMicro won’t have any of that. True, when its first sites are up and running it could give customers the customary facility tour, but it would be over pretty fast.

That’s because EdgeMicro is building out a very different kind of colocation business. Instead of multi-megawatts it wants to build out in increments of 48kW using container data centers.

Speaking to Data Center Knowledge recently, EdgeMicro co-founder Greg Pettine explained that the company’s business model is similar in some respects to edge colocation specialist EdgeConneX but involves building out capacity in much smaller chunks.

“If you look at the EdgeConneX model, they were funded by the cable guys, by Akamai and so forth, who said we need 500kW of capacity in Tier 2 cities,” says Pettine. “Our focus is to just spread that out. As they expand – Netflix, Amazon, any of them – they will need to put more capacity in multiple markets in the next 12 months. What if we spread out and put that in the wireless edge, where most of the content is being consumed anyway?”

Pettine was previously a director of business development at Schneider Electric. He started EdgeMicro in July 2017. The company got its official launch at the Competitive Carriers Association (CCA) event in Fort Worth, Texas, in late October.

The startup has ambitious plans to build out its network of container data centers directly adjacent to cell towers. EdgeMicro is not the first company to target this space – rivals include partners VaporIO and Crown Castle, with their Project Volutus, as well as Databank and Vertical Bridge – but it believes it has some important intellectual property that could prove a differentiator.

Its secret sauce is an appliance called Tower Traffic Xchange, or TTX. It is the brainchild of the company’s CTO, communications networking specialist Anton Kapela. EdgeMicro describes the appliance as “a comprehensive, single-box Local IPAccess (LIPA) solution.”

The TTX essentially creates an intelligent interface between wireless devices, wireless networks, and content -- something that Pettine says hasn’t existed until now. The current process for serving content to a mobile device can be extremely convoluted and expensive, as it often involves what Pettine describes as “four-million-dollar routing solution” and in some instances thousands of miles of backhaul. “That solution works, but it is not real effective, and it is expensive for the mobile network operators (MNOs) to have to backhaul that content constantly. It is their second biggest operating cost,” he says.

EdgeMicro’s approach puts the content at the cell tower and uses TTX to manage requests and routing. If the content is not stored locally in EdgeMicro’s data center, the request is sent over the conventional network. “The TTX appliance analyzes the signal, says, ‘What is it? What is the IP address? Is it here? Yes? Boom, grab it.’ If it’s a ‘no,’ then it goes on its way without disturbing any of that networking functionality at all.”

Plans to Sell Directly to Netflix

EdgeMicro plans to build out initially in 30 sites in Tier 2 or Tier 3 cities, where it would take significant backhaul to get any content or cloud-type services. “We will pick a tower that serves a three-to-five mile radius that gives [access to] over a 100,000 eyeballs and on-spec put out a container,” says Pettine.

The company’s business model is built on charging content providers, such as Netflix or Amazon, rather than MNOs. “If we can get to 400 or 500 sites in the next five years, that will still be a small piece of the mobile edge compute market but an important piece, especially for the MNOs. We are relieving backhaul, improving customer experience, reducing churn, improving flexibility in their network architecture, all of that,” he says. “But our model doesn’t even take into account charging them anything. We are giving them access to the gold we are bringing in from the content guys.”

The TTX technology is still undergoing lab tests, but the company already has a production site on order from an undisclosed customer that it hopes to have up and running by the end of 2017. The aim is to then do a proof of concept deployment in early 2018 and run it for 60 or 90 days to get sufficient data to perfect the technology.

As well as its proprietary TTX, container or micro data centers are also core to EdgeMicro’s business model. There are different definitions of what constitutes a micro data center, but the startup has licensed Schneider’s containerized data centers, a product line the infrastructure giant added to its portfolio when it bought AST Modular in 2014.

The micro data centers will hold up to six rack at between 6kW and 8kW per rack. There will N+1 cooling but only N power. “We believe the redundancy will be built into the network and the software and not into the facility,” says Pettine. The solution will use in-row UPS instead of “monolithic” UPS. “We don’t want a failure that will bring down the whole container. If one of the 10kVA UPS in-rack goes out, then you have a two-day SLA, so you pull that out and put another in. Everything will be remotely monitored and some remote-hands for the UPS and server replacement.”

EdgeMicro may also use some of Schneider’s smaller-form factor single-rack micro data center designs – known as SmartBunkers – in urban locations where space is tight. “The smart bunker is down there in case we get into urban environments. That could be a rooftop or an existing building,” says Pettine.

The biggest immediate issue the company faces is finding locations. “Right now the bottleneck is site selection. You have to look at the power, how many tenants on that power, and how many eyeballs are being served,” says Pettine. “Even if someone gave us $50 million right now and said go out and put up 100 of these as fast as you can, it would take us two years just to find the sites.”

Another impediment could come in terms of competition from established players, such as EdgeConneX, that are building out in much bigger units of capacity but also work closely with MNOs and tower owners. Pettine argues that despite the big potential the market isn’t sufficient yet to interest EdgeConneX or other large colocation providers. “We are talking about 30kW of capacity at once. At $300 per kW you are roughly at $120K per year per site. You have got to put a bunch of sites up for that to move the needle for any of these colo guys, including EdgeConneX.”

EdgeMicro has received non-equity funding to date but is looking to complete a $13.5 million investment round in the near future. “That is about $3 million to get all of the staff on board for 18 months and then approximately $10 million to put up 30 sites in the next 18 months,” says Pettine. “That equates to around $280,000 per site all in, which includes the TTX appliance.” The appliance costs about $60,000.

EdgeMicro is still at an early stage, so it remains to be seen whether it will deliver on its ambitions. It is clear however that not even taking into account the potential growth of IoT devices at the edge – which could be explosive – the content delivery opportunity around 4G and eventually 5G will open up all sorts of new opportunities for established players but also new entrants.

A previous version of the article said EdgeMicro spun out of Schneider Electric. According to a Schneider spokesperson, Schneider had no hand in launch of the startup. DCK regrets the error.
0 comments
Hide comments
Related