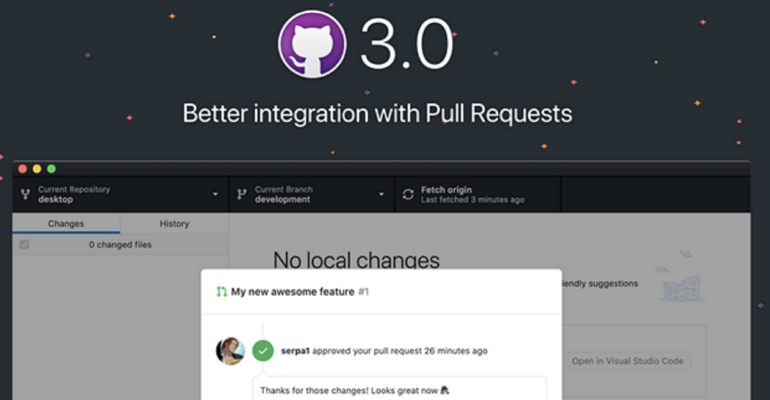 GitHub is making it easier for DevOps teams to stay up to date with code changes and requests via the updated GitHub Desktop 3.0 open-source tool.

For millions of developers around the globe, the open-source GitHub Desktop is a primary interface for DevOps activities.

On April 26, GitHub issued a major update — GitHub Desktop 3.0, which provides users with a series of productivity and DevOps workflow collaboration enhancements.

Related: Culture, Not Tech, Is Key to Getting Most Out of DevOps Practices

GitHub Desktop provides a desktop user interface that runs on a developer's local computer, with a visual interface to the GitHub code version control platform. While using GitHub online via a web browser is common, for many the convenience and control of running on a desktop is hard to pass up.

GitHub provides a collaborative approach to development, where code is merged from one developer's code repository into another via a function known as a pull request (PR). A key feature of GitHub Desktop 3.0 is the ability to execute pull requests more reliably.

"GitHub Desktop has long provided the ability for users to see, at a high level, whether a PR failed its checks," Sergio Padrino, staff software engineer at GitHub, told ITPro Today. "Now we're also letting them drill into the specifics of why those checks failed."

There are any number of reasons why a code pull request could fail, according to Padrino.

The new feature in GitHub Desktop 3.0 lets users know if the check failed due to, for example, a syntax error encountered during the build or if a unit test failed, he said. Coupled with the ability to rerun checks, the new feature lets users attempt to fix transient check failures such as connectivity issues without having to leave the app, Padrino said.

In a busy DevOps environment, a high volume of notifications can be overwhelming. A new feature in GitHub Desktop 3.0 will identify what GitHub refers to as a high-signal pull request notification. The basic idea is to elevate the most impactful notifications that a user needs to know about. Padrino said the high-signal notifications are curated and are based on GitHub's experience.

"Notifications can be disruptive as we all know, and we want to avoid disrupting users unless we can be relatively confident that the notification will be useful," he said. "Letting users know that a commit they just pushed caused the build to fail or when a collaborator requests changes to their PRs are such scenarios where the signal to noise ratio is high enough to warrant a notification."

The notification capability in GitHub Desktop 3.0 is intended to improve collaboration across DevOps teams in an organization. 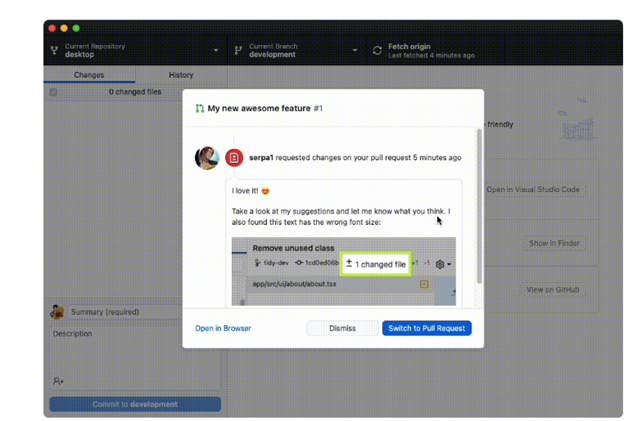 In addition to surfacing the high-signal pull requests, the interface in GitHub Desktop 3.0 will now also immediately identify when a team member has reviewed, commented on, or made changes to a given request.

"GitHub Desktop is a must-have in many developers' toolbox, and we're working on the things that our users love with a tool that lets them focus more on the task at hand and less on Git and how to share their work and collaborate with others," Padrino said.