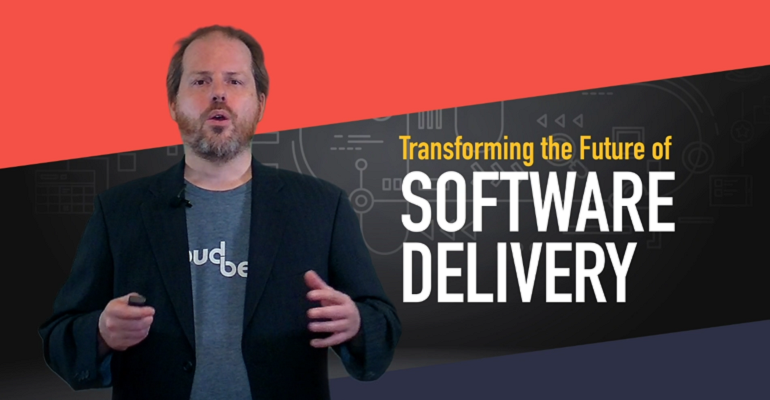 At its annual DevOps World event, CloudBees outlines its vision for DevOps and announces a series of product updates.

For CloudBees founder and CEO Sacha Labourey, DevOps methodologies that can help with automation are vital for enterprises looking to become more resilient.

The concept of accelerated resilience enabled by DevOps was a key theme at the CloudBees DevOps World 2020 virtual event, which ran Sept. 22-24. During his keynote address, Labourey (pictured) explained what accelerated resilience is, as his company announced a series of product updates to help organizations with a DevOps process for software development and delivery. The idea of rapidly delivering software is not a new concept. That said, according to Labourey, simply being fast isn't good enough in the current economy.

"To me, resiliency means strength and tenacity," he said. "Acceleration does us no good if we sacrifice safety."

For CloudBees, the path to accelerated resilience begins with having everything automated and connected, Labourey said. If software development processes are automated in a continuous integration/continuous development (CI/CD) pipeline, there is less chance for human error, and when an error does occur, it's easier to roll back changes to a known good state.

Also emphasizing the need for automation was Shawn Ahmed, senior vice president and general manager of software delivery automation at CloudBees. According to Ahmed, automation is enabled by codifying the knowledge about processes within an organization. Extracting the distributed knowledge that sits across an organization in people's brains and converting it into formal knowledge rules is key to the success of automation, he said.

James Governor, co-founder of analyst firm RedMonk, noted during the closing keynote panel of the DevOps World 2020 event that moving toward accelerated resilience is a culture change for some organizations that will involve people as well technology tools.

"You can't have a culture change with tools, but of course tools underpin and instantiate a culture change," Governor said. "So what we're now looking for is a platform that will underpin the system that will enable people to work more effectively together and get better and faster and more resilient software delivery."

As part of its efforts to advance the state of DevOps, CloudBees announced at DevOps World 2020 a new module for its Software Delivery Management platform that provides enhanced feature flag capabilities. Feature flags allow developers to decouple features from releases. As such, instead of needing to wait for a major milestone release, users can simply turn on new features inside of an already deployed release.

CloudBees also announced a new module for engineering productivity data that helps to bring more insight into the time and resources used during a development process.

"Gaining more control over feature deployment and deeper insights into the development process will give customers the control, visibility and insights they need to deliver software more quickly and efficiently,” said Susan Lally, senior vice president of product development at CloudBees.

Not Just in the Cloud: Serverless in Your Own Data Center
Sep 09, 2020