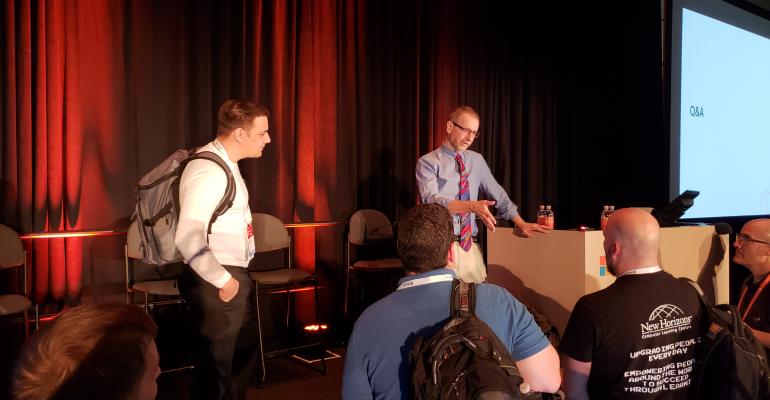 According to Microsoft Technical Fellow Jeffrey Snover -- well-known for being the chief architect of PowerShell -- the thing developers need to be mindful of is not building a technology that best serves shareholders, but one that best serves stakeholders, a.k.a. the people who will be most directly affected by the tools or services being built.

When I first saw Microsoft Technical Fellow Jeffrey Snover's name on the Microsoft Ignite talk "Software Development in an Age of Social Responsibility," it really caught my eye. Instead of a technical session, which would not be unexpected from someone who's the chief architect of PowerShell and chief architect for Microsoft's Azure Storage and Cloud Edge groups, he was addressing practices in the human side of software development processes that are critically important to companies and organizations. Most especially if they want to build tools and services to help others do the right thing instead of purely being about making a profit at any cost.

I learned that Snover was concerned about this talk because it was not going to be a technical talk but instead address human factors in software development processes that can have such an impact on the products and services we all use today. His main concern was that attendees would see his name on the session and expect a very technical talk.A big reason behind this is because of his background. He has been at Microsoft for 19 years and in the technology industry for his entire 40-year career. He has seen what works and what doesn’t. It is because of that experience that he is infinitely qualified to share these insights on such an important subject.

When I asked Snover why he created this session, he connected the dots between his technical role at Microsoft and this subject: “As technical fellows, our job is to look into the future and plot a course. Typically, that has been a technology issue but more importantly these days we are looking at issues around ethical concerns and social justice and realizing that changes need to happen so that technology best serves our customers.”

Once he got started with the session, his main goal was to address the human factors in software development processes by answering four key questions:

Let's walk through all four areas.

Question One: Why Become Better Engineers?

First, because traditional businesses are being consumed by software applications and services. The examples given in the talk include how the ad industry's become shaken up by Google; how the music industry was rocked by digital music and streaming; how job recruiters now have to work with LinkedIn; or how financial services had to learn from PayPal and Square.

In 2011, none of the top 10 largest companies by market value were software companies; that list was topped by JPMorgan Chase, HSBC Holdings, General Electric, and Exxon Mobil.

In 2017, six of the top 10 companies in market value were software companies, including Apple, Alphabet, Microsoft, and Amazon. It is a common belief across industry these days that every company is a software company at some level.

Today software-based devices are everywhere. We've got a planetary-scale cloud infrastructure, 2.5 billion cell phone users on the planet, and analysts forecast that users will have six different connected devices in 2020, just two years away.

Snover said, “If you and I are building our future world then we need to ask ourselves – What kind of world do we want to build?”

He advised coders: You have the power to not just code what you are told to do but to be a responsible and moral member of the team. Speak up when necessary and decide if a company’s business model aligns with your values before you accept a job.

Question Two: What Are the issues?

In this part of the talk, Snover said there are opportunities and challenges as we approach the future. Many believe we are in the Fourth Industrial Revolution and that it is powered by the intelligent cloud/intelligent edge. Some areas that technology is impacting include:

For example, artificial intelligence increases productivity but dramatically affects or eliminates entire categories of jobs. And while the Internet has expanded access to information, it's also introduced new security and operational risks for businesses and civic institutions. Technology not only transforms business, but it also transforms society and exposes new challenges and raises new questions.

Snover told developers to ask themselves these questions when building software, all within specific contexts:

For the sake of technology

For the sake of business

For the sake of society

Build for all of society by understanding that disability is universal and dynamic. Sometimes it is temporary and at others it is situational. The digital world makes inclusive design critical for access.

Same applies when building with AI to avoid biases such as confirmation, dataset, association, automation, and interaction biases.

“When in doubt, focus on solutions that amplify human dignity.”

Question Three: What is Microsoft doing?

“To empower every person and every organization on the planet to achieve more.”

And he gave a solid example: the rural airband initiative, which aims to provide 23.4 Americans in rural communities with broadband access in the next five years.

Question Four: How do we move forward?

Snover says that developers need to acknowledge that they are responsible for the moral acts of themselves and their products; the focus needs to shift from shareholder to stakeholder.

He closed talking about DevOps and using Process Engineering to improve products and services, but this quote really hit home about the realities of today.

It comes from the memoirs of former U.S. Defense Secretary Robert Gates:

“...at that very moment, one or more people in each of my colleagues’ departments were doing something that was illegal or improper…The key was to have mechanisms to find such people before they did too much harm.”

As Snover noted in his opening quote, the course is plotted to the future. How will you do things so that your technology best serves your customers?

You can access the full presentation slide deck and on-demand video of the session at the Microsoft Ignite portal. His anecdotes throughout the talk, which come from his 40 years of experience, add great depth to the talk. Take the time to check it out completely.