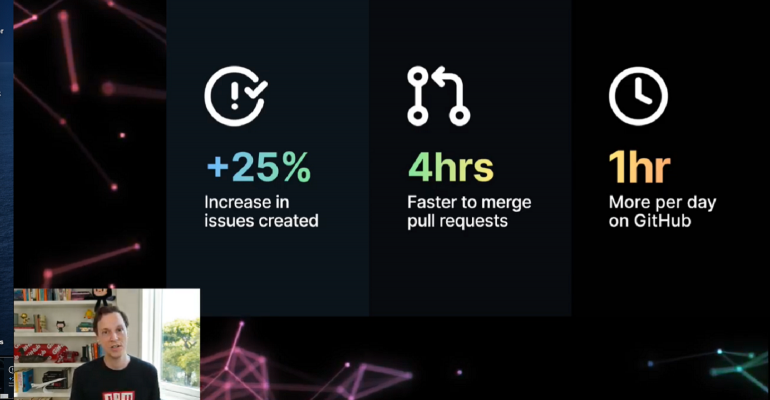 At the GitHub Satellite virtual conference, Microsoft's GitHub business unit details new efforts to help developers write code and collaborate as its use continues to grow.

Although the COVID-19 pandemic has shut down much of the physical world, online development efforts have ramped up, according to GitHub.

Microsoft's GitHub business unit hosted its Satellite virtual conference on May 6, revealing new statistics about the state of global development efforts, as well as announcing a series of new services to help improve collaborative software development. During the event's opening keynote address, GitHub CEO Nat Friedman discussed how GitHub has continued to grow, even during the current health crisis.

According to Friedman, over the last several months, there has been a 25% increase in the number of issues created on GitHub. The average amount of time it takes for a code pull request to get reviewed has declined by four hours, and on the whole, developers are spending about an hour more per day on GitHub.

"Basically, the trend is we see more collaboration than ever before," Friedman said. "And that's kind of amazing to see that, in the age of social distancing, people are turning to social coding."

Among the new services GitHub announced at the Satellite conference is the GitHub Discussions feature.

While conversations have always been possible in the comments of issues inside of code repositories, the Discussions feature provides a specific, purpose-built place just for community discussion.

"GitHub Discussions is more than just a space for conversations on GitHub; it's a configurable home for your entire community," explained Becca Zandstein, senior product manager at GitHub.

Another new feature announced at the virtual conference is Codespaces, which provides an integrated development environment (IDE) directly into a GitHub code repository. Codespaces is powered by Microsoft's Visual Studio Code (VS Code) source code editor, according to Friedman.

"Codespaces gives you all the full power of VS Code running in your browser with a containerized cloud-based development environment that's fully integrated with GitHub, all ready to go," he said.

Security Gets Baked into Code Repositories

CodeQL is based on technology that GitHub gained via its acquisition of code security vendor Semmle in September 2019.

"GitHub code scanning will proactively scan your code and identify vulnerabilities directly in your code review workflow," Friedman said. "It does this with the power of CodeQL, which is the world's most advanced semantic analysis engine, together with CodeQL queries that have been written and shared by the entire security researcher and an open-source community."