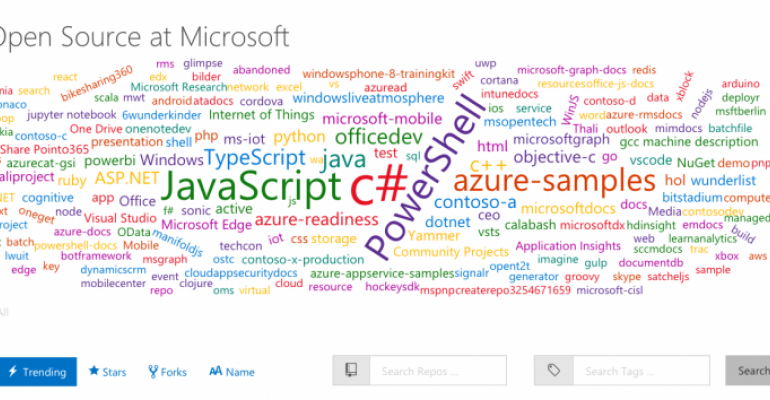 &nbsp;Redmond&#39;s dropping of its own CodePlex in favor of GitHub illustrates the effect that open source is having on the software company.

Microsoft's announcement on Friday that it's shutting down CodePlex, its code hosting website for open source development, is a minor milestone on Redmond's road to open source credibility. The move won't affect the company in any way that will be visible to its users. It also won't have much of an effect internally, as most of the company's open source projects have already made the shift to GitHub on their own.

"Over the past few years, we’ve watched many CodePlex projects migrate," Brian Harry, a corporate vice president at Microsoft, wrote in his blog announcing the shuttering of the project. "We’ve also seen a substantial decrease in usage: as of this writing, less than 350 projects saw a source code commit in the last 30 days."

This indicates a subtle but important change in the way things are done at Microsoft. The switch from CodePlex to GitHub doesn't appear to have been a top-down decision instituted from the boardroom, but a bottom-up process that began with open source developers who were more comfortable working with GitHub, the repository that in many ways sets the standards for open source development.

None of this is surprising. As Microsoft expanded its involvement into open source, it filled its ranks with developers who brought considerable experience working in open source environments to the table. This was almost certain to eventually affect the culture of a company that traditionally has been ruled almost entirely by official edicts from management.

It seems that the concept of sharing, the backbone of the open source development model, has appeal to those at both ends of the corporate ladder. In October, I spoke with Scott Hanselman, the company's program manager for .NET and an open source veteran, and he told me, "When we started eight years ago, they [legal and corporate affairs] would say 'no' and we would have to get them to 'yes.' Now they always start with, 'Alright, let's see how we can do this.' No one pauses or laughs when we say 'let's open source this' or 'let's put this on GitHub.'"

This went along with what I'd been hearing through the grapevine, that Microsoft's adoption of open source was having a relaxing effect on a corporate culture that for years was perceived as being tense and somewhat toxic. Although Hanselman spends most of his time working from his home in Oregon, he agreed: "I've been there eight years. It was not friendly when we started and it's friendly now."

When CodePlex was introduced in 2006, Microsoft had good reason to develop the platform for it's budding moves into open source. Back then, about the only public code repository was SourceForge, which was not only showing its age after years of neglect, but was loaded with advertising. At the time, ethical issues were also beginning to arise around the platform, which eventually led many open source projects to leave for other solutions. Although SourceForge still exists, it has been relegated to "me too" status since the creation of GitHub in 2009.

GitHub was an almost immediate success, and has become the go-to repository, not only for open source projects, but for many proprietary projects as well. Making GitHub the official home of its open source code is a good move for Microsoft, which still struggles for acceptance from segments of the open source community.

According to Friday's announcement, the shutdown process for CodePlex has already begun.

"As of this post, we’ve disabled the ability to create new CodePlex projects," Harry said. "In October, we’ll set CodePlex to read-only, before shutting it down completely on December 15th, 2017."

CodePlex will remain available as an archive, at least for the time being, seemingly as a precaution against a later gotcha, in case it turns out some useful or needed information doesn't get migrated to GitHub.

"At that time, CodePlex.com will start serving a read-only lightweight archive that will allow you to browse through all published projects – their source code, downloads, documentation, license, and issues – as they looked when CodePlex went read-only," Harry said. "You’ll also be able to download an archive file with your project contents, all in common, transferrable formats like Markdown and JSON."

While the shuttering of CodePlex isn't in itself an earth shattering event, the way Microsoft is handling it is an indication of the positive effect the open source development model is having on Redmond.