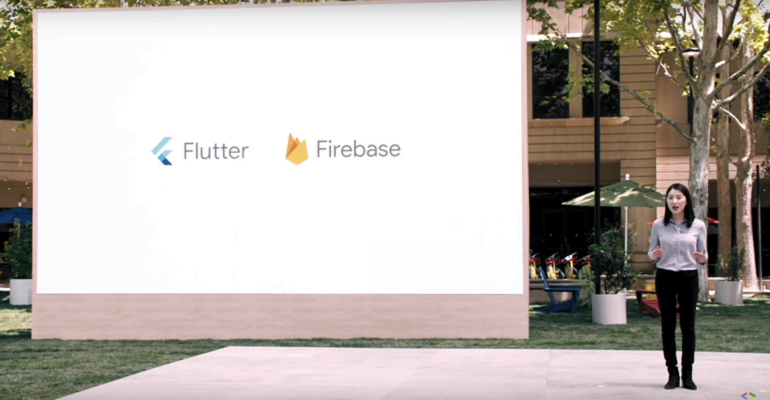 At its I/O conference, Google announces new capabilities for its Flutter and Firebase developer tools.

At its I/O developer conference May 18-20, Google announced a series of updates to its developer tools, including Flutter and Firebase.

Both Flutter and Firebase now make it easier for developers to build apps.

Flutter is an open-source project that provides a software development kit for building user interfaces and applications. Originally, Flutter was focused squarely on mobile development, but that has changed in 2021.

"Our goal with Flutter has always been providing a UI [user interface] platform for ambient computing across a range of devices, including mobile, web, desktop, as well as embedded," Google Product Manager Zoey Fan (pictured) said during the keynote at Google I/O. "We've been continuing to take further steps along this path by broadening Flutter from a mobile framework to a portable framework with updates to web and desktop."

Traditionally, when building apps, Fan said, the first decision a developer has to make is, “Where’s my app going to run?” With Flutter, developers start from the experience they want to create and can shift to any device they want to target, she added.

While Google started Flutter, Fan emphasized that beyond Google, a global open-source community is contributing to the project. For example, companies such as Toyota, Canonical, Sony, Samsung and the Microsoft Surface team are all working to bring Flutter to even more applications.

"Already, there are more than 200,000 apps using Flutter in the Google Play Store," Fan said. "Within Google, more than 30 teams choose to build with Flutter for its productivity. This includes Google Pay, which unified its codebase with Flutter and went from two million lines of code to 1.1 million, reducing it by nearly half."

During her keynote, Fan also announced the availability of Flutter 2.2. The update provides improved support for Flutter on the desktop, so it's even easier for developers to target Windows, macOS and Linux from a single codebase, she said.

Security also gets a boost with a sound null safety capability in the Dart programming language at the core of Flutter. In addition, the integrated Flutter DevTools capability has been enhanced in version 2.2 to help developers better understand how memory is allocated.

During the Google I/O keynote, Project Manager Francis Ma explained that Google's mission for Firebase is to empower developers to succeed by making it easy to build and run mobile and web apps. He added that more than three million apps use Firebase every month.

Ma also announced that Google is expanding and releasing new extensions for Firebase. Firebase Extensions are prepackaged solutions that let developers quickly add more functionality to mobile and web apps such as translating text with the Google Cloud Translation API, he said.

Another new feature is Firebase Remote Config, which lets developers update the behavior and appearance of an app for different audience segments without releasing a new version. Going a step further, Google is launching a new feature called personalization, which uses the power of Google’s machine learning to automatically deliver the best experience to each of user.

"Let's say you're a game developer and you want to balance the difficulty of your game to keep users engaged," Ma said. "With personalization, you can set up different options and then ask Firebase to figure out the rest for you."