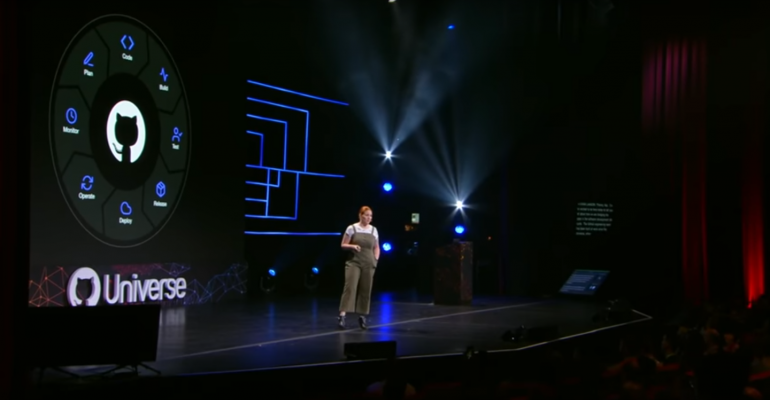 GitHub rolls out its Actions and Packages developer tools and reveals new insight into the state of the developer community.

For many developers, GitHub is the center of their universe, hosting code repositories and tools essential to modern code development.

At the annual GitHub Universe conference, held Nov. 13-14 in San Francisco, GitHub announced a series of updates to its developer tools and provided insight into the current state of the developer landscape. Among the product announcements made by GitHub were the release of GitHub Enterprise Server 2.19 and the general availability of Actions and Packages for developer automation.

"We all have felt the pain of getting our code in production, and we wanted to do it reliably and systematically because if it touches production, it is production," Dana Lawson (pictured), vice president of engineering at GitHub, said during her Universe keynote. "Now, thanks to GitHub Packages and GitHub Actions, we've enabled some pretty incredible workflows, codified inside repositories on GitHub."

GitHub Actions provides multiple automation capabilities for developers, including matrix builds. Lawson explained that matrix builds enable multiple versions of a code build for different operating systems, including Linux, macOS and Windows, with a one-click action. Actions also provides live searchable logs of a build system so developers can identify the root cause of any breaks. In addition, Actions helps with code security, providing a built-in capability to store secrets, including passwords and access tokens.

GitHub Packages works with GitHub Actions as well as continuous integration systems to help build application packages. Packages are shareable, and GitHub is making it easier for developers to publish packages to a public or private repository for consumption.

"We also give you those package analytics so you know where that package came from, who wrote it, who's using it and where it's at," Lawson said.

The State of the Octoverse

The size and scale of GitHub and its impact on development continue to grow as well. Nat Friedman, CEO of GitHub, said during his opening keynote at GitHub Universe that there are now more than 40 million developers using GitHub to build software.

GitHub tracks the current state of developers and developer tools via its annual The State of the Octoverse report, which had a few surprises this year.

"The biggest surprise to me is Python surpassing Java," Cathy Zhou, senior data scientist at GitHub, told ITPro Today. "Over the past few years, Python has continued to gain popularity on GitHub, and seeing it pull ahead of Java and the second most popular programming language by count of repositories and contributors definitely confirms its pervasiveness in technology today."

While Python has surpassed Java, it still trails behind the top language, which is JavaScript.

"The stats indicate that for the top 50 open-source projects that host npm packages, each of them has 3.5 million downstream project repository dependencies," Zhou said.