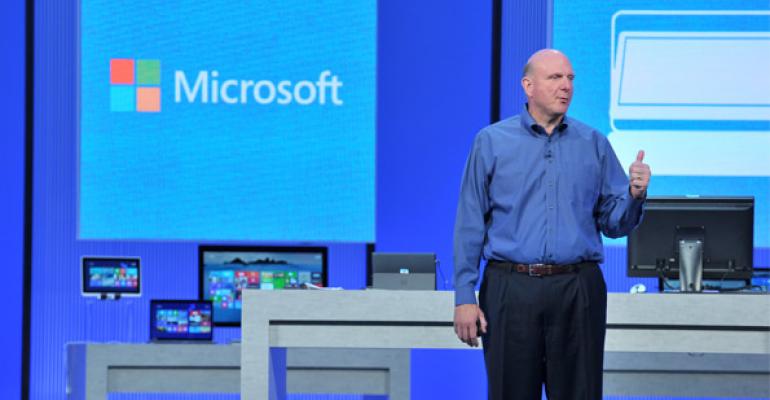 Related: "Microsoft Is Betting the Farm on the Surface Tablet"

I don't pay enough attention to Microsoft's place in the market or its internal structure to really be a pundit. Sure, I read various op-ed pieces here and there and have seen enough information about the IT market to know that we're in the midst of a sea change. But I don't hold myself as being wise or astute enough to have opinions that carry much weight. I also think that pundits who have long been claiming the death of Microsoft just don't know what billions in the bank can do for a company. More importantly, I don't think Microsoft will ever simply die or become irrelevant; instead, I think Microsoft will become less and less of an industry leader while gradually remaining an insanely viable and powerful company, such as IBM. But in the end, I think Ballmer needs to go.

Steve Ballmer's recent letter outlining his desire to reposition Microsoft as a devices and services company instead of being a 'mere' software company evoked several different thoughts from me. Ironically, none of them had anything to do with the content of the letter, simply because I couldn't force myself to that much condensed babble-speak.

In fact, I still honestly wonder if Steve Ballmer ever even read that whole letter himself, meaning that I think he tasked some speechwriter to craft it on his behalf. I also wonder how many people at Microsoft actually read the entire thing versus how many of them who skimmed it while wondering what Ballmer's letter would mean compared to how things would really pan out for them personally and professionally over the next few years at Microsoft.

The first thought I had about this letter came days later when Microsoft announced their most recent earnings statement. Although Ballmer seems to be steering the company more towards consumers and services, I noticed that all of Microsoft's recent losses came from consumer-facing segments of the business. Furthermore, all of the profits reported seem to come from Microsoft's more traditional business or software side of the company. Granted, any armchair quarterback could easily pretend to demonstrate vast wisdom in pointing this problem where I can't help but remind myself that any restructuring or re-focus will take time, energy, and the potential for short-term losses in exchange for long-term growth.

But if long-term growth really is the goal, then maybe Ballmer can explain how continuing to foul the Microsoft partner ecosystem over and over again makes sense as a long-term strategy. For example, now that it's clear that the Microsoft Surface is a resounding marketing failure, it's probably fair to ask what this should means in terms of how Microsoft has treated its OEM partners.

When the Surface was first unveiled not only did Microsoft throw its OEM partners under the bus by placing blame on why Windows had never successfully made it into the tablet space, but Microsoft also went into direct competition with its OEMs in an attempt to completely cut them out of the equation in their headlong dash into what was a brash, bold, and new future for Microsoft based on products and services.

Related: "Microsoft's Surface RT is Shaping Up to be a Train Wreck"

And please note that I'm not saying Microsoft was wrong to pursue the tablet space or that they should have ignored the pace and degree in which iOS and Android tablets are gaining market share. Instead, I'm pointing out that Microsoft simultaneously managed to alienate traditional allies by making it clear that it was their own branding confusion, lackluster software and apps, and unproven devices priced at the point of hubris that were the reason that Windows hasn't achieved any significant purchase within the tablet-market.

This brings me to the next thought I had about Microsoft's recently announced restructuring, which is that it seemed insanely well timed to drop right before this latest, disastrous earnings call. Call me paranoid or tell me that I need to adjust my tinfoil hat, but I'd swear that Microsoft had another bit of big news right before their last major financials release as well -- the firing of Sinofsky. At the time everyone joked that this was just Ballmer copying Apple's strategy. Apple releases a phone, so does Microsoft; Apple releases a tablet, so does Microsoft; Apple fires a key executive, so does Microsoft. But in hindsight, it seems that the firing of Sinofsky was timed to send a message to the market and investors, which was that Ballmer had seen problems with the way things were shaping up and had taken corrective action to fix that by firing Sinofsky. Likewise, with this latest release of financials timed so closely after such a big announcement (as before) it's hard for the cynic in me to not notice what might be a pattern here of Ballmer trying to pre-emptively assuage investor angst with semi-distracting yet totally on-key major developments right before earnings releases. And, interestingly enough, I'm not the only one that's noticed this.

The Fish Rots from the Head

Or it might be that my dislike and skepticism for Ballmer is festering a bit too much. In my mind, Ballmer's the perfect kind of CEO that investors want at the head of Microsoft. For seemingly forever, he's had a fantastic track record of consistently keeping the stock price stable and productive. For investors and from a practical standpoint that's not something to be derided. For Microsoft employees and even for folks like me who depend on Microsoft technologies to pay our mortgages, that's been something I'm guilty of taking for granted because instability wouldn't have been at all to my benefit.

By the same token, I also can't help but feel that much of the magic, dream, and passion under Ballmer has been lost. That might just be me. I might have grown up from the 20-something kid that thought that working at Microsoft would be the coolest thing ever until I found out about that idiotic thing called stack-rank. But then again, I'm not the only one who has noticed that Microsoft is slipping from being a visionary, leader of the pack, and pacesetter to being a big, plodding behemoth that consistently rakes in the bucks. Nor am I trying to assert that making money is evil or can't be done when pursued with visionary zeal and passion for shaping the technological world because that's clearly what propelled Bill Gates and Steve Jobs to greatness.

Still, I can't help but think that if Mr. Ballmer truly wants Microsoft to succeed and flourish in the coming years, then the best thing he could do would be to step aside and let some fresh blood, ideas, and interest provide the kind of cultural change that Microsoft needs to remain innovative, passionate, and visionary -- instead of solely being a behemoth, plodding, money-making machine that's increasingly less and less relevant in shaping the future (i.e., the next incarnation of IBM).