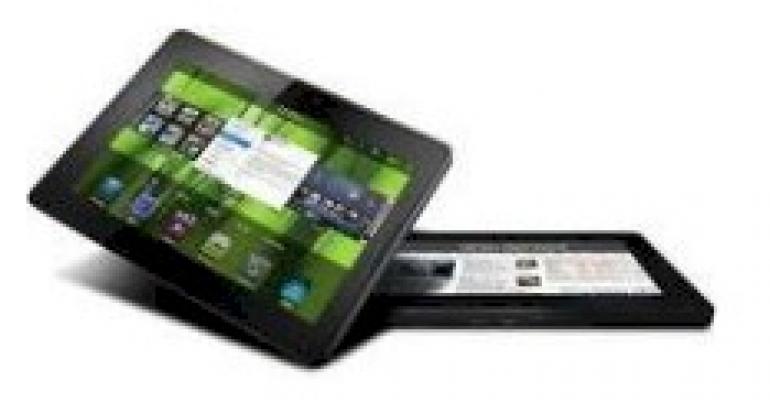 RIM Hires YOU i Labs to Help with PlayBook

You i Labs CEO Jason Flick confirmed in an email to GigaOm that the companies are working together. This, despite RIM having purchased Swedish UI firm The Astonishing Tribe, known as TAT in December to bring its "innovative mobile user interface designs" and "talent to the BlackBerry PlayBook and smartphone platforms," as RIM CTO David Yach wrote in Dec. 2 blog post.

Creating a unique and engaging user experience is no small feat. As YOU i Labs CEO and Co-Founder Jason Flick says during a presentation posted to BlackBerry Rocks, "We're in a hundred-year evolution of the UI. This is not a small problem. This is not something that's just, 'Hey, it's kind of neat these mobile phones, they've kind of changed the way I relate to technology.' This is a big deal."

Later in the presentation, Teknision president Gabor Vida explains that our growing reliance on "the cloud" additionally increases the need for a smart interface.

"What we believe is that we're going to see a world where devices can learn you. And not only are you going to be embedded in the cloud, as your data is, but you're going to be embedded in your interfaces. And your interfaces will share your own information, so as you go from device to device it's your own intimate interaction with your data that carries with you," says Vida. His 20-year vision is of interfaces that are, "personal, adaptive, pervasive — they're everywhere."

Arguably complicating things for RIM is its multi-prong approach. RIM developer guru Tyler Lessard has explained to Connected Planet that RIM is exposing the BlackBerry tablet OS to as many developers and developer communities as possible, in an effort to build the largest possible developer community.

What can YOU i Labs offer RIM, which over the last few years has found itself perpetually playing catch-up to Apple?

A segment on the Canadian "Ontario Innovation" program explains that YOU i Labs' technology is "enabling manufacturers to create visually engaging and responsive gesture-based user interfaces on any device — even those with far less computing power than the Apple iPhone."

YOU i was able to replicate Apple's UI, Flick says in the segment, with devices that had bill of materials (BOM) that were an eighth of the iPhone's.

"Their highly efficient, next-generation gesture-interface software not only increases battery life, it requires less-expensive hardware to operate, reducing cost per unit," states the program host in a voiceover. "This can mean a lower retail price, the addition of more features or higher overall performance."

Teknision admitted back in April that it was working with, and hadn't been acquired by, RIM.

"We have been working with the QNX team for a couple of years now and this is the project that is getting the limelight but what they have under the hood with that platform is going to be something to keep an eye on," Vida wrote in an post on the company's blog, adding that Teknision stepped aside when RIM acquired the very capable TAT team.

What's next for Teknision? Vida offered a line that RIM may want to borrow for PlayBook and that Apple, ever the leader, exemplified in its June 6 introduction of iCloud.

"We believe," said Vida, "that the tablet revolution is really part of a bigger movement towards embedding valuable, connected and beautiful experiences anywhere you can find a screen."