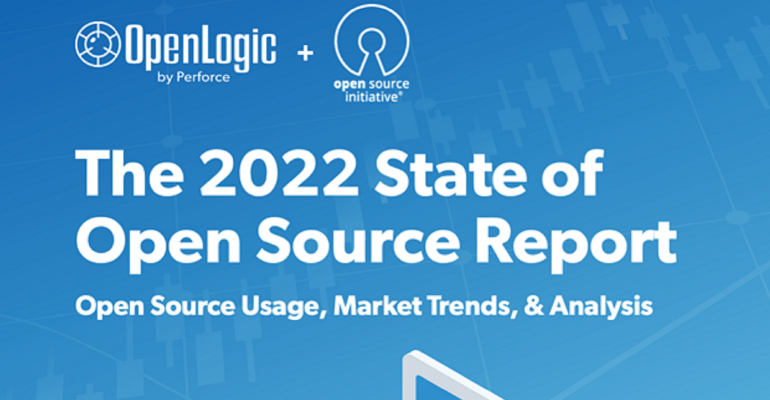 Open source is widely used by organizations for programming and development frameworks, and recent security concerns don't seem to be slowing adoption.

Open source software usage is becoming increasingly common across organizations of all sizes, but that doesn't mean there aren't barriers to adoption.

The 2022 State of Open Source Report sponsored by the Open Source Initiative (OSI) and Perforce Software was released on Feb. 15 to provide insight into current open source trends. The study surveyed 2,660 IT professionals around the world, the majority of whom reported that overall open source usage is growing within their organizations.

Related: Why You Should Trust Open Source Software Security

The report found that 77% of organizations increased their use of open source software over the course of 2021. Use of open source is not about migrating away from proprietary tools at this point either.

"For the most part, it’s no longer about migrating to open source, but starting with open source," Javier Perez, chief OSS evangelist at Perforce, told ITPro Today. "Programming languages and frameworks are all dominated by open source options."

Open source software usage spans nearly every category of IT.

The open source report found that the most used type of open source software is programming languages and frameworks, at 39% of respondents. Coming closely behind is databases and data technologies at 36%, followed by operating systems at 34%.

Open source isn't just a one-way consumption pattern either; contributions can be made and a community of users can participate in development. According to the report, 32% of organizations contribute to open source projects. Going a step further, 30% of respondents reported that their organizations have developed new software that is available as open source in public git source code repositories.

The study identified a series of challenges to open source software adoption.

The leading issue — identified by 30% of respondents — is a lack of internal skills, while 27% said restrictions in some open source licenses is a cause of concern. Twenty-one percent of respondents are concerned that open source doesn't scale as well as commercial software.

Also, the open source report shows that there is clearly more awareness around everything related to open source security, according to Perez.

"Keeping up with updates and patches is one of the top support challenges when using open source. This speaks about the global awareness to keep up with patches that address vulnerabilities," he said.

Perez added that vulnerabilities in popular open source libraries such as Log4j, Struts and OpenSSL have brought more awareness and better software development lifecycle practices to the use of open source.

"The report shows that it has not scared anyone away from open source," he said.

One of the key findings in the 2022 State of Open Source Report is that only 15% of respondents reported that their organizations have an open source program office (OSPO).

"All major organization contributors to open source have an OSPO, and mature organizations see the benefits of having an OSPO to drive the strategy and operation forward," Perez said. "Fifteen percent is still low, but we predict this to be a growing trend."