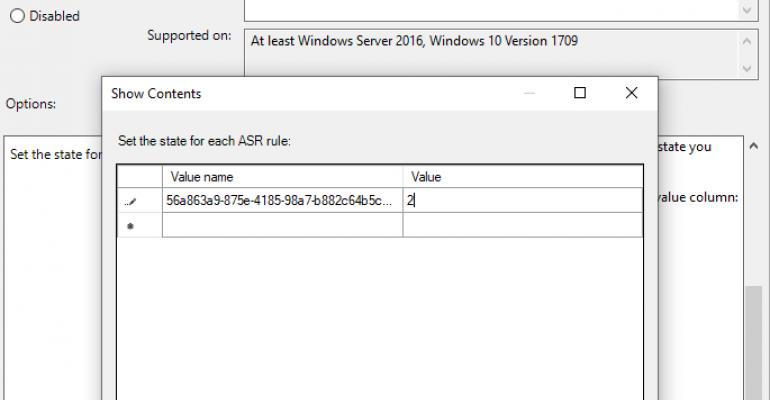 How to Use Group Policy for Windows Attack Surface Reduction

Attack surface reduction is one of the most important steps in hardening any system.

Before I get started I need to point out two important things.

Second, the available settings for Windows attack surface reduction vary based on the operating system build you are running. The settings and techniques discussed in this article are based on Windows 10 or Windows Server 20H2. 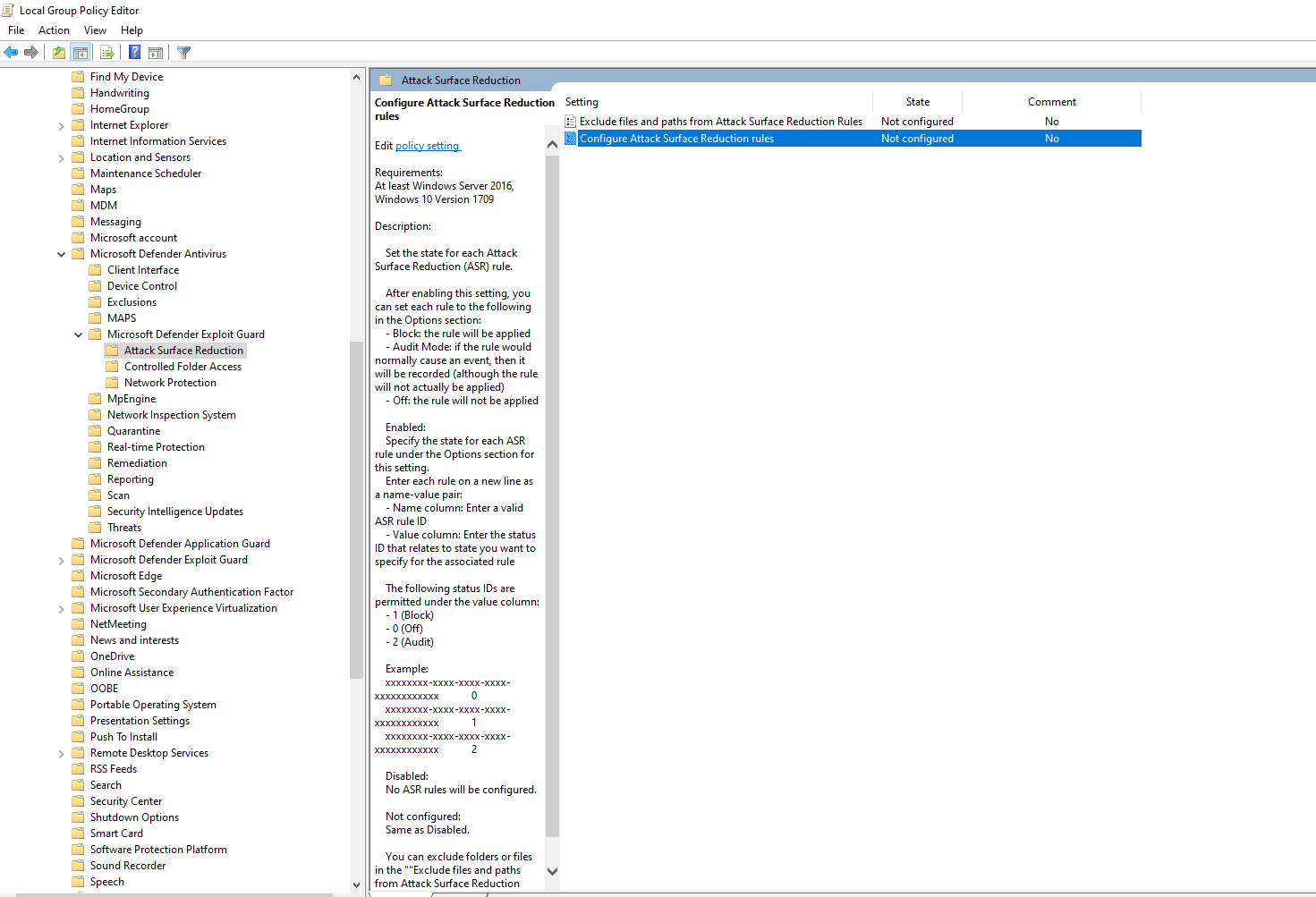 Using the Exclude Files and Paths From Attack Surface Reduction Rules setting is completely optional. This setting is used if you have specific file paths (or even executable files) for which the attack surface reduction rules should not apply.

When you enable the exclusion setting, you will have to click on a Show button, which you can see in Figure 2. This causes Windows to display a dialog box, which you can also see in the figure. This dialog box contains two columns: Value Name and Value. The Value Name column is where you enter either a folder path or a path and filename. The value should always be set to 0. Each path or file that you want to exclude should appear on a separate line. 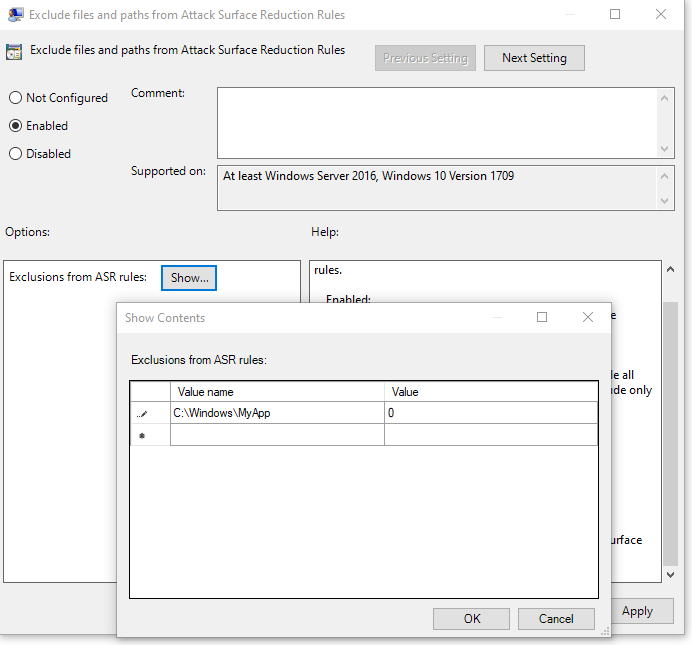 This is where you enter path exclusions.

The other Group Policy setting shown is the Configure Attack Surface Reduction Rules setting. As was the case for the Exclude Files and Paths setting, you will need to enable the Configure Attack Surface Reduction Rules setting and then click on a Show button, which will cause Windows to reveal a screen where you can enter a series of key/value pairs. You can see what this looks like in Figure 3. 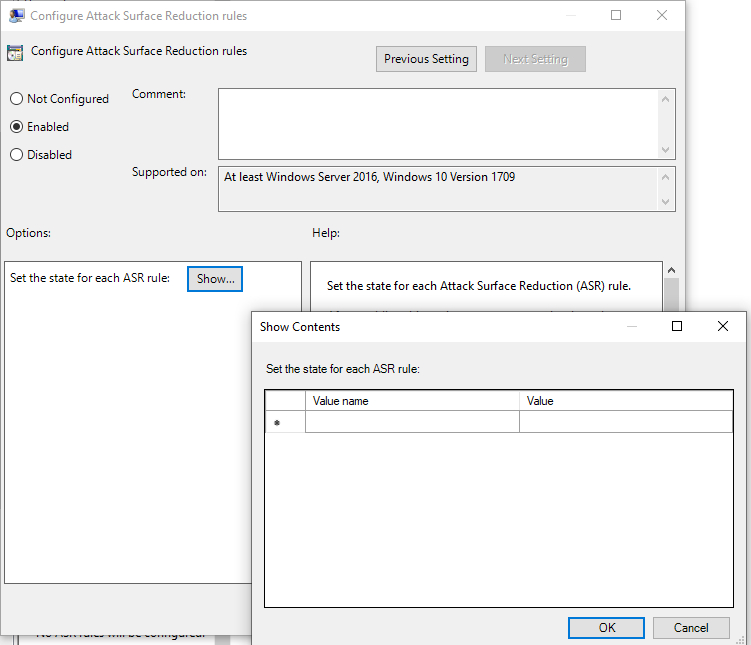 This is where you enter the Configure Attack Surface Reduction rules.

So as you can see, the Configure Attack Surface Rules setting doesn’t simply contain a list of rules that you can enable or disable using checkboxes. Unfortunately, things are a bit more complicated than that.

The Value Name column is where you enter the attack surface reduction rule that you want to enable. More specifically, you don’t enter the rule’s name, but rather it’s GUID. You can find a list of rules and their corresponding GUIDs here.

As you look through the list of rules, there are a few things that you should pay attention to. First, as previously mentioned, not all rules work with all Windows versions, so be sure to look at what builds each rule works with.

Another thing to pay attention to is that not all of the rules support the use of exclusions. The list of rules at the previously mentioned URL indicates which rules do and do not work with exclusion rules.

As you add rules to the Group Policy setting, you will need to specify a value for each rule. There are three possible values:

It’s always a good idea to audit rules before enforcing them.

To put all of this together, let’s say you wanted to create a rule to block the abuse of exploited vulnerable signed drivers, and you wanted to audit the rule. The GUID associated with the rule is 56a863a9-875e-4185-98a7-b882c64b5ce5, so you would enter this GUID as the value name and set the value to 2. You can see what this looks like in Figure 4. 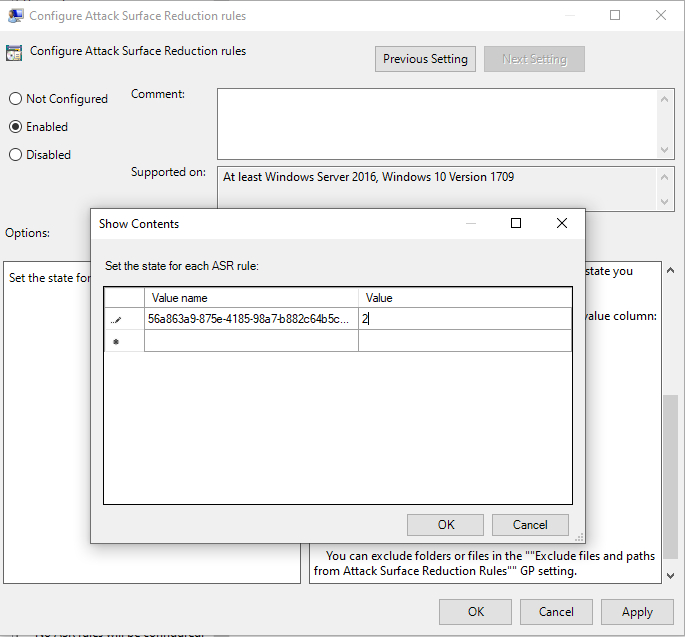 This is what it looks like when you create an attack surface reduction rule.