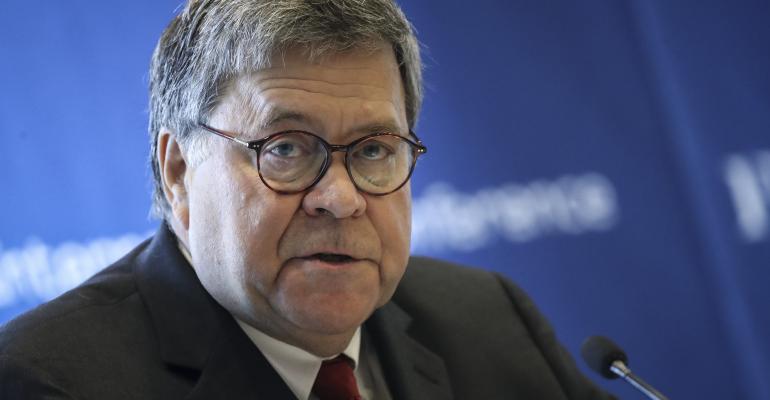 Barr Warns Time’s Running Out for Companies to Open Encryption

Time may be running out for Facebook Inc. and other technology companies to come to a voluntary agreement providing law enforcement officials with access to the encrypted communications of their users.

(Bloomberg) -- Attorney General William Barr issued a sharp warning that time may be running out for Facebook Inc. and other technology companies to come to a voluntary agreement providing law enforcement officials with access to the encrypted communications of their users.

“While we remain open to a cooperative approach, the time to achieve that may be limited,” Barr said Tuesday in a keynote speech at a cybersecurity conference hosted by the FBI and Fordham University in New York.

“It is prudent to anticipate that a major incident may well occur at any time that will galvanize public opinion on these issues,” Barr said. “Whether we end up with legislation or not, the best course for everyone involved is to work soberly and in good faith together to craft appropriate solutions, rather than have outcomes dictated during a crisis.”

Barr’s comments came as President Donald Trump’s administration is making a renewed push to break an impasse over the ability of federal, state and local law enforcement agencies to access encrypted communications, according to U.S. national security officials.

The move by multiple U.S. agencies to better coordinate their efforts is being done under the direction of the White House National Security Council, said the officials, who asked not to be identified discussing the new initiative.

The effort also includes enlisting the help of international partners and will be raised at an upcoming meeting of the so-called Five Eyes, an intelligence alliance between the U.S., the U.K. and other allies, one of the officials said.

Privacy advocates responded forcefully to prospects of the Trump administration effort on encryption. Senator Ron Wyden, an Oregon Democrat, said Barr and Trump pose a unique danger because they can’t be trusted if companies provide the government access to private communications.

“I expect that -- if we give this attorney general and this president the unprecedented power to break encryption across the board and burrow into the most intimate details of every American’s life -- they will abuse those powers," Wyden said in a statement. "Never before have I been so certain that the administration in power would knowingly abuse the massive power of government surveillance."

The U.S. government has struggled for years to break an impasse with companies that provide encrypted communications, from giants like Facebook and Apple Inc. to new technology ventures doing cutting-edge development.

During the Obama administration, Apple resisted law-enforcement demands to help break encryption that protects user privacy on its iPhones. The FBI tried to compel Apple to write new software code to break into an encrypted iPhone, only to back down during a court battle when it found its own way into an accused terrorist’s seized device.

Barr didn’t offer any details about the renewed government effort and said the Justice Department isn’t proposing a solution at this time. But his speech was peppered with language about how companies may eventually be required to take certain actions.

FBI Director Christopher Wray will describe “the damage being inflicted” by the use of encryption when he speaks at the conference on Thursday, Barr said.

“The status quo is exceptionally dangerous, unacceptable, and only getting worse,” Barr said. “The rest of the world has woken up to this threat. It is time for the United States to stop debating whether to address it and start talking about how to address it.”

Five U.S. Agencies May Have Been Hacked Through Ivanti Flaws
Apr 30, 2021