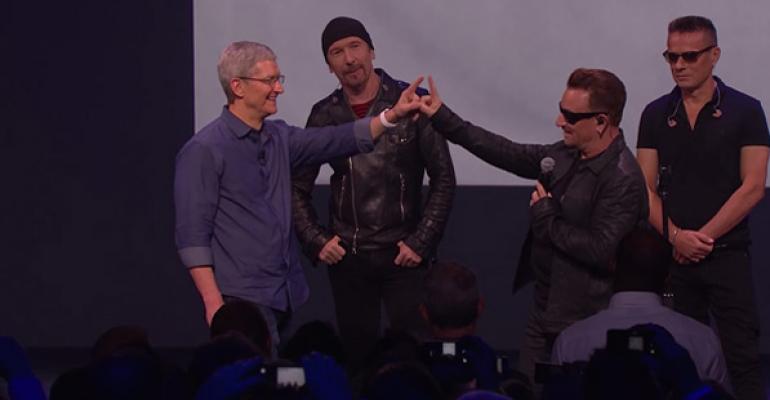 U2 Flub Shows Even Apple's Customers Have Privacy Limits

Apple's press events are tightly controlled and are almost universally successful at whipping the audience—comprised of both employees and tech press and bloggers—into a frenzy over the mention of even the most minor of product updates. But last week's event—at which the firm introduced the iPhone 6, Apple Watch and Apple Pay—included one of the most awkward and weird moments in any Apple event. And its aftermath has proven an embarrassment to Apple.

At the end of the two-hour-plus product introduction, Apple introduced the rock band U2, with which it had famously collaborated with many years ago on a special edition iPod. (To give you an idea of how long ago that was, the U2 iPod had both a click-wheel interface and a black and white screen.)

Apparently unaware of how unhip the classic rock band is now with its young audience of fans, Apple CEO Tim Cook and U2 lead singer Bono then engaged in the most obviously fake and forced banter seen outside of speed dating circles and then announced, in a very roundabout way, that Apple had paid the band a huge but undisclosed sum of money so that it could give away its latest album, Songs of Innocence, for free to iTunes users.

This type of gift should have been seen for what it is: A nice if curiously misguided gesture from a CEO and a company that clearly just wants to please its customers. But the awkwardness of this press event moment—which actually included Cook and Bono touching fingers like the alien and Elliot in "E.T."—was overshadowed the bone-headed mistake that Apple made in giving away the U2 album.

Not cool, Apple. And in a surprising show of independence for a normally compliant group, Apple's user base responded with outrage, complaining to the company that they didn't want U2's album, and they certainly didn't want it automatically added to their music collections or downloaded to their devices. (It's unclear if any of the complainers even listened to the album.)

So on Monday, almost a week after the press event, Apple provided a support link—humorously, its www.itunes.com/soi-remove—to help users get rid of the album. In a bit of Microsoftiness, however, this removal process doesn't actually remove the U2 album. It simply hides it from your devices, though it really remains in your collection.

Coming as it did after the iCloud security flub—another rare example of Apple taking it on the chin—one might think that the firm would have thought a bit more about accessing every single iTunes users' accounts. But this event should stand as a warning to any tech company about the limits of customer patience when it comes to the sanctity of their accounts, something the banking industry learned eons ago. If Apple's rabid fans didn't appreciate this gesture, imagine how quickly customers would turn on a Facebook or Microsoft.

Regardless, even this silliness wasn't enough to dampen the excitement around Apple's new products. On Monday, Apple also announced record iPhone 6 pre-orders, with 4 million units sold in the first 24 hours alone. And you can expect long lines at Apple's retail stores on Friday when the new handsets go on sale.