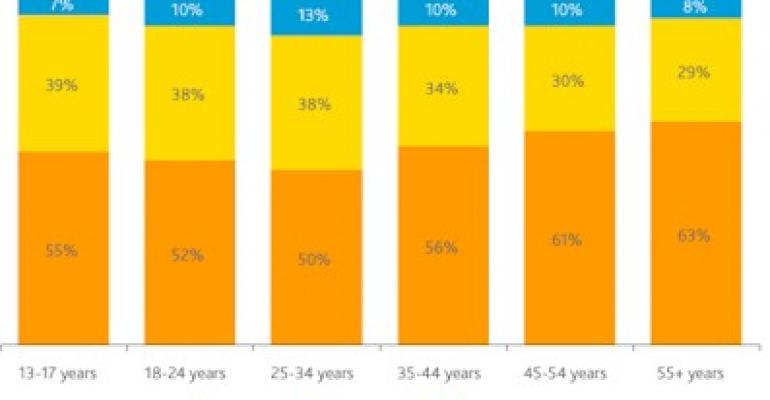 In the wake of the recent hubbub over research that claims Apple is collecting location data from users of several of its devices, Nielsen has released the results of a study indicating that the majority of mobile users are concerned about privacy issues.

The data comes from recent surveys of what Nielsen describes as “most mobile app downloaders,” which the research firm defines as mobile subscribers who have downloaded an app within the past 30 days. In all age brackets (ranging from 13 to 55 and older) the majority of respondents indicated they are concerned about privacy when it comes to sharing their location via mobile phone. Women respondents tended to be more concerned, at 59 percent (compared to 52 percent of men). And, for the most part, concern steadily rose with age (though respondents between 25 and 34 were the least concerned, at 50 percent, compared to 55 percent for the 13-17 age bracket, and 63 percent among respondents 55 and older).

All of this is not altogether surprising, except when you consider the wild popularity and increasing usage of location-based apps that require (fully opt-in) check-in, which many users in turn broadcast via social media outlets like Twitter and Facebook. It begs the question of whether privacy concern is something people automatically believe they should be concerned about (and report in surveys like Nielsen that they are), or whether they really are concerned. Nielsen’s data also does not indicate exactly what people are concerned about. Are they worried that their ex-girlfriend will know where they are, for example, or do they have concerns that their government (or another country’s?) is tracking their location.

A blog post on an ACLU site addresses the issue and makes a call for transparency from Apple and, presumably, app developers creating location-based apps to tell consumers what they’re doing with the information they collect.

…user trust is critical for a company's long-term health. If users don't trust your service, or if regulators or the press get wind of privacy violations, the consequences can range from fines and lawsuits to the death of your product entirely. (Just ask Google how Buzz worked out for them.) Yet initial reports suggest that Apple appears to be recording your location without any kind of notice or control … You shouldn't have to choose between using an iPhone or iPad and keeping control of your location information. Please sign our petition for transparency and tell Apple and other companies that you, and not they, need to be the one with ultimate control over your own personal information.

Whatever the reasons for consumer concern, complete transparency may be mobile developers’ wisest play to alleviate whatever worries downloaders of their apps. If you can’t tell users what you’re doing with their information, you probably shouldn’t be collecting it in the first place.